The Canadian International was one of three graded stakes run on the Woodbine turf on Saturday. Due to early morning rain, the course was officially rated good, but with a 9.4 GoingStick reading, would be called "good-to-firm" in Europe. Conditions were typical for mid October in Toronto, with partly cloudy skies and a post time temperature of 12 C (53 F).

The distaff counterpart to the International is the $600,000 E.P. Taylor Stakes (G1) for older fillies and mares going 1 1/4 miles on the turf. Kilboy Estate Stakes (G2) winner Red Tea was sent off as the 3-1 favorite in the field of 10 off her 3rd place finish in the Prix Jean Romanet (G1) at Deauville. In to challenge her included 7-2 second choice Starship Jubilee, winner of the Canadian Stakes (G2), and 5-1 third choice Si Que Es Buena, unraced since winning the La Prevoyante (G3) at Gulfstream in January.

Jockey Eurico Rosa da Silva sent favorite Red Tea to the lead through fractions of 26.50, 52.07, and 1:17.34 while pressed by Starship Jubilee and stalked by 15-2 Holy Helena. Turning for home, jockey Luis Contreras sent Starship Jubilee to lead through 1 mile in 1:40.79. Starship Jubilee opened up a 2 length advantage midstretch through 9f in 1:53.24. 16-1 Durance put in a strong rally from 5th but Starship Jubilee easily held her off by 1 length to win in 2:03.29. It was a head back to 17-1 Platane third, while Red Tea tired late to finish 8th. 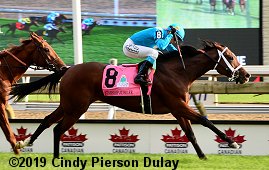 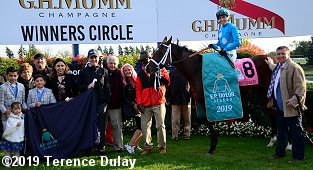 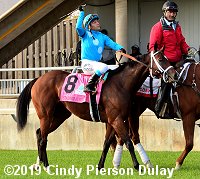 Left: Starship Jubilee in the winner's circle. Winning trainer Kevin Attard said, "It being 1 1/4 miles is always tough, but it being a Grade 1 and being in our backyard, that kind of helps soften the blow. She was so convincing when she won her last start (the Grade 2 Canadian Stakes) and she came out of that race in great shape. She's worked really well in the interim and Luis gave her an incredible ride today. I've been fortunate to make some good claims in my career but… she's the pinnacle right now. This is my first Grade 1 win and I want to thank Adam and Bonnie of Blue Heaven Farm for buying her and allowing me to train her." 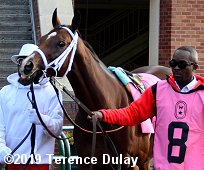 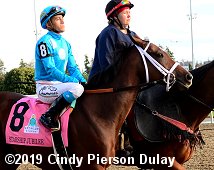 Left: Starship Jubilee exits the indoor saddling area. Winning jockey Luis Contreras said, "Last time (in the Canadian), she relaxed really nice going 1 1/8-miles and today, (Kevin) told me if they want to give you the lead, take the lead, but she didn't need the lead to win this race. This filly came out really well trained and she was amazing today. She always gives me something no matter what at the end and I just was so comfortable on the last turn. When I saw no one was coming close to us on the front end, I was just waiting for the stretch to make a run and she just exploded." 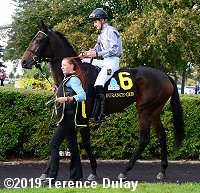 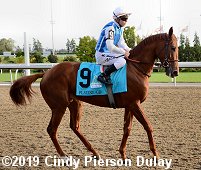 Left: Second place finisher Durance in the paddock before the race. The Peter Schiergen trainee improved her record to 4 wins, 2 seconds, and 1 third in 10 starts, earning $232,005 for owner-breeder Gestut Ebbesloh. 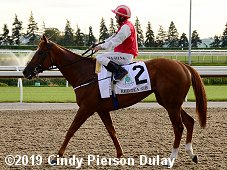 Eighth place finisher and beaten favorite Red Tea returns after the race. The Joseph O'Brien trainee has a record of 8 wins, 4 seconds, and 8 thirds in 36 starts, earning $240,286 for owner Capel Street Syndicate.


Kicking off the Saturday stakes trio was the $250,000 Nearctic Stakes (G2) featuring a field of 9 older horses sprinting 6 furlongs on the turf. Blind Ambition was sent off as the 2-1 favorite off an allowance win last out after a long layoff. In to challenge him included 7-2 Woody Creek, 5th in the Arran Stakes at Ayr after finishing second in the Phoenix Sprint (G3) at Curragh, and 9-2 Admiralty Pier, winless since an allowance at Tampa Bay in January and 7th in the Woodbine Mile (G1) last out. 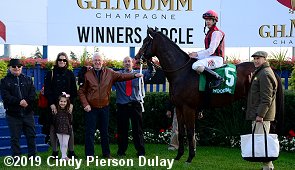 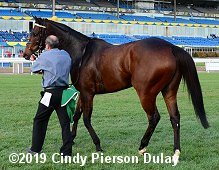 Left: City Boy in the winner's circle. Winning trainer Mike Keogh said, "I nominated him, before his last start, to this. If you watch a replay of his last race, he was five wide on the turn, the rail was out and he got bumped down the stretch. He gave away a lot of ground and he still finished third. I just thought if no heavy hitters shipped in, it would be worth taking a shot. And, that's what happened. It's been a long year, this one… a difficult year. It's great. I'm just going to savour the moment. This one's for (late owner-breeder) Gus (Schickedanz)."

Right: City Boy heads back to the barn after the race. Winning jockey Jesse Campbell, who will retire from riding on Monday said, "From the 1/8 pole to the wire, I'm just like, 'Please hold on. I might not ever get to feel a win like that again'. He picked the right day to run the race of his life. (My family in Chicago) have put up with me being away for 4 years and before that my wife followed me around for 14 years. Enough's enough. They're irreplaceable. In a perfect world, if Woodbine was in Chicago I'd be riding until I'm 45. There are some really good people here. We got close to some people here and I can't say that for every track we've ever been." 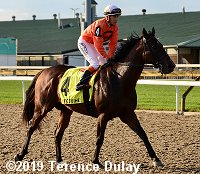 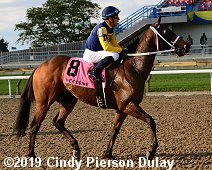 Left: Second place finisher Reconfigure returns after the race. He improved his record to 5 wins, 4 seconds, and 1 third in 10 starts, earning $185,265 for owner-trainer Bob Tiller. 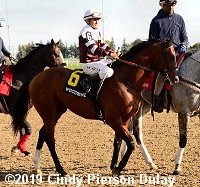 Fourth place finisher and beaten favorite Blind Ambition in the post parade. The Mark Casse trainee has a record of 6 wins, 2 seconds, and 1 third in 20 starts, earning $389,790 for owner-breeder Gainesway Stable.