The $1 million E.P. Taylor Stakes (G1) is the distaff counterpart to the Pattison Canadian International, with a field of ten older fillies and mares going 1 1/4 miles over the rain-soaked E.P. Taylor Turf Course. European invader Red Bloom was sent off as the 9-5 favorite off a win in the Blandford Stakes at the Curragh last time out. Also in the field were 9-2 second choice Angara, shipping in from New York for trainer Bill Mott off a win in the Diana and then a fourth in the Flower Bowl last time out, and 5-1 third choice and top local hope Arravale, a close second in the Canadian Stakes last time out after winning the Del Mar Oaks.

17-1 outsider Live Life led the field through slow fractions of 26.10, 51.52, and 1:17.81 over the rain-soaked course, while being stalked by 13-1 Ready's Gal and favorite Red Bloom. Turning for home, Live Life tired and dropped from contention allowing Ready's Gal to poke her head in front after a mile in a tepid 1:44.31. Jockey Jose Valdivia aboard the favorite Arravale, who had raced back in seventh early, took her to the rail to save ground on the turn, and at the top of the lane a hole opened up on the inside. Arravale switched leads and came on through, pulling away to a 1 1/2 length lead with a furlong to go. She easily held off the late-charging 13-1 Barancella late to prevail by a length in a time of 2:10.34 for the 10 furlong trip. It was just a neck back to another closer, 9-1 Naissance Royale. Red Bloom had nothing left for the stretch run and finished sixth. 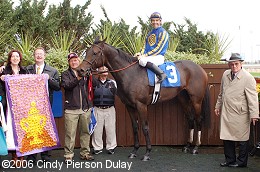 Arravale in the winner's circle with trainer Mac Benson on the right. Winning trainer Mac Benson said, when asked if he had any concerns about the wet course, "Sure, because she's never run on it. With soft going, we don't have a chance in this country to run on soft going and the Europeans, I thought, had a little bit of an edge on us. I knew Neil Drysdale's filly (Live Life) would run the first part of it. At least that gave us some pace to go at. She (Arravale) is a real, real good horse.""


Arravale did NOT like the flower blanket at all and would not calm down until it had been tossed off her to the ground.

Winning jockey Jose Valdivia Jr. said, "I've sat on some nice horses. Heat Haze comes to mind. But this horse was unbelievable. The ground was very soft. She was traveling very well the whole time throughout. She was covered up, she was very relaxed and when I called on her, (she gave me) an believable turn of foot over the soft going. She was so relaxed and I had so much horse. I know how long the stretch is here. I was never worried. Nine out of 10 times the hole is going to open up and that's exactly what it did. I knew that if she'd respond like she did at Del Mar, she'd be performing. It goes to show you what a great filly she is. These are the kind of horses that make you have a grin like I have (right now). 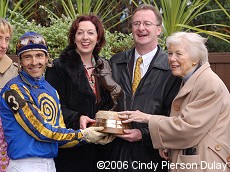 The trophy presentation for the E.P. Taylor Stakes. Winning owner Robert Costigan said, "It's a dream come true. This race has meant so much (to me). It's the fourth time entering, third time a charm. This filly was broken at Windfields (owner E.P. Taylor). Growing up in Ireland, watching horses like The Minstrel, Nijinsky.... to immigrate here, to have a horse of this caliber and to be in a position to have Windfields' former trainer Mac Benson to do the job. I just can't really articulate how much it means. It's just wonderful." Asked about the Breeders' Cup, Costigan added "That will be Mac's decision. If she comes out of the race well, we'd certainly consider it." 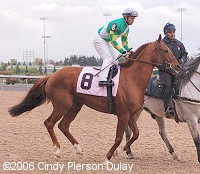 Second place finisher Barancella in the post parade. Her jockey Javier Castellano said, "She tried really hard. She ran good the last time in New York and now we brought her here and she had a good trip. I think she was second-best today." 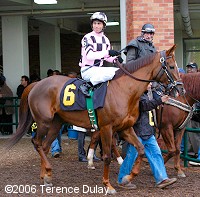 Third place finisher Naissance Royale heads out of the paddock before the race. 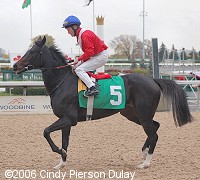 Beaten favorite and sixth place finisher Red Bloom in the post parade. Chris Richardson, managing director of owner Cheveley Park Stud said, "Unfortunately, although she acts on ground with some cut in it, she doesn't like extremes and the rain we had today proved her undoing. On good to soft she is fine, but on this ground, which was similar to Deauville (where Red Bloom was beaten in a Group Two in August), she doesn't pick up. This is almost her certainly her last race and she has been a phenomenal filly, winning a Group race every year for four years."

The last stakes race on the card was the $500,000 Nearctic Stakes (G2), a 6 furlong sprint over the turf course. 3-1 second choice Moss Vale was quickest out of the gate and led the field around the far turn through a quick quarter of 22.84. At the top of the stretch, 5-2 favorite Fast Parade, who had stalked the pace in third just a length off the pace earlier, came out three wide, took over the lead at the 3/16 pole, and pulled away to a 2 1/2 length lead with a furlong to go. 11-1 In Summation, who was fifth early, put in a strong rally late but the favorite would not be denied, holding him off to win by 3/4 length in a time of 1:12.41. It was 1 3/4 lengths back to 11-1 Old Dodge in third. 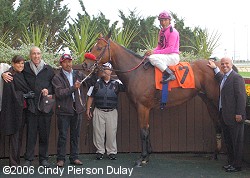 Fast Parade in the winner's circle with trainer Peter Miller to the right. Winning jockey Pat Valenzuela said that the speedy gelding can be ridden from any part of the pack. "He's a very versatile horse. He can go to the front, he can come from off the pace. Peter had him plenty ready and I was just lucky to be the pilot." Trainer Peter Miller added, "He runs well fresh. We wanted to spot him appropriately and this race looked like a good spot." 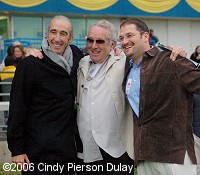 Owners Gary and Cecile Barber were exstatic about the win and were heard saying "I love Canada!". Gary Barber (on the left) is also part owner of Becrux who won the $1 million Woodbine Mile in September. 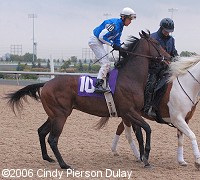 Second place finisher In Summation in the post parade. 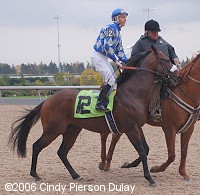