The companion event to the Pattison Canadian International is the Grade 1 E.P. Taylor Stakes. Thanks to a purse increase to $1 million this year, a field of twelve older fillies and mares entered the starting gate for this 1 1/4 mile trip over the Woodbine turf. Last year's runner-up, Punctilious, was back for a second try for the powerful Godolphin Racing, with contract rider Frankie Dettori in the irons aboard the 9-5 favorite. Also in the field were 9-2 second choice Honey Rider, coming off a win in the Glens Falls Handicap at Saratoga, and 7-1 third choice Latice, last year's French Oaks winner who is now based in New York, winning the Waya Stakes at Saratoga two starts back.

Local hope and 17-1 longshot Stunning Rose led early under pressure from 9-1 shot Iota through slow early fractions of 26.64, 51.02, and 1:15.88 over the yielding course. Dettori kept Punctilious close to the pace in fourth early on, keeping her out of trouble in the 3 path avoiding the softer going along the rail. Turning for home, Stunning Rose faded from contention allowing Iota a brief lead after a mile in 1:41.61. However, the pace was not slow enough for the course, as the closers quickened their pace at the top of the lane. Latice, who had sat back as far as seventh, saved ground around the far turn under Jose Santos, and made her bid early in the stretch, taking a slight lead over 19-1 longshot Ambitious Cat at the 1/8 pole after finally finding a hole to go through. Honey Rider with jockey John Velazquez was closing quickly after being 11th at the top of the lane, and in the final strides, surged ahead to win by just 1/2 a length over Latice in a time of 2:06.70 for the 1 1/4 miles. It was just a head back to Ambitious Cat in third, and a nose to 12-1 shot Barancella in fourth. 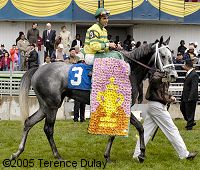 Honey Ryder parades for the fans after winning. Her jockey John Velazquez said, "She's beaten a lot of good horses. She beat a whole lot of tougher horses today. She deserves it. I kind of got shut off going to the turn and to the 3/8 pole. There was a whole wall of horses. Going to the 1/4-pole, I said 'I'm not going to try to go between them since I got stopped once already.' Once I pulled her out at the 1/4 pole, she responded very well. It was a little bit of a rough trip but she overcame that. She's small and light. She handled (the soft turf) very well. Once she got her momentum and her stride together, she went on, so it didn't really cost us very much. Once they get to her and they come closer, she gives you a little more. She always seems to find a little more and fight on." 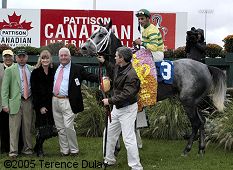 Honey Ryder and her connections in the winner's circle. Winning owner John Greathouse (dark coat and pink tie to the horse's left) said, "It's biggest the race we've won ourselves, owning racehorses. This is as much fun as you can have with your clothes on." 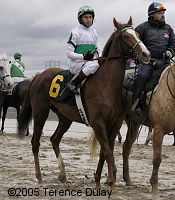 Second place Latice in the post parade. Her jockey Jose Santos said, "This filly really likes this kind of surface, she had a great trip, closed well in the last 1/4 mile, but just got beat in the last 50 yards. She was in good position all the way around and when I asked her she gave me everything she had She ran a beautiful race and will be a beautiful filly to ride again next year." 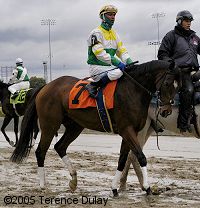 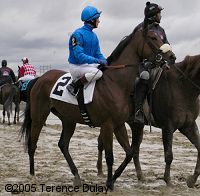 Kicking off the stakes action was the Grade 2 Nearctic Stakes for sprinters on the turf. With the inner rail out at 20 feet due to the heavy rain and soft going, the distance was about 6 furlongs this year. The lukewarm favorite was Steel Light, coming in off an allowance win in New York, with Vanderlin a close second favorite after winning the Shadwell Turf Mile at Keeneland last out.

Local sprinter Langfleur jumped to the lead out of the gate and lead through the first half, then quickly faded out of competition when Steel Light collared him at the head of the stretch. Steel Light then hung tough though the stretch to keep long shot Sophia's Prince in second while another long shot, Atticus Kristy, rallied up for third. Vanderlin never fired and ran a rather even race to finish 4th. Winning trainer Christophe Clement said, "I thought he was going to be competitive but I didn't know if he was going to win or not. He trained very well all year long. He's a nice horse, a touch unlucky. He certainly deserved to win today."
Results chart Race 3 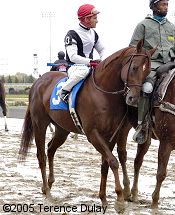 Steel Light in the post parade. His jockey Corey Nakatani said, "Chris (Clement) did a great job with him. He told me to make sure that I got him into the race. We got away so good. He was finding his way pefectly. I just angled out and left him just a little bit to do. He showed that he was much the best."

On the state of the turf course he said, "It's definitely really soft. I would say more of a yielding than soft. It's definitely got a lot of give to it."