A competitive field of ten faced the starter and a 1 1/2 mile tour of Woodbine's E.P. Taylor Turf Course on Sunday in the Grade One $1.5 million Canadian International. Unfortunately, defending champion Ballingarry had to be scratched the morning of the race due to injury.

When the race got underway, local hope Shoal Water and invader Phoenix Reach dueled for the first quarter mile in 25.31, then jockey Martin Dwyer got Phoenix Reach to relax and drop down towards the rail to save some ground over the long trip. Shoal Water inherited the lead and held it down the backstretch, with fractions of 51.41 for the half, 1:16.66 for six furlongs, and 1:42.51 for the mile. Favorite Brian Boru was unhurried early and dropped back to last for the backstretch run. On the far turn, 14-1 shot Bowman Mill, who had stalked the pace in fourth early, came on to get the lead, going 1 1/4 in 2:08.36, as Shoal Water began to drop out of contention to his eventual eighth place finish. Down the lane, late-running 12-1 shot Macaw went four wide in his bid for the lead, but Phoenix Reach came on well after dropping back early, gaining the lead at the 1/8 pole and easily held off Macaw by 3/4 length in a final time of 2:33.62 over the yielding course. It was another head back to 5-4 favorite Brian Boru in third who rallied seven wide in the stretch with too much to do, and a length back from him to Bowman Mill. 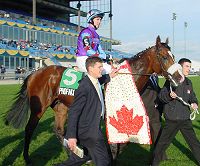 Phoenix Reach with his flowers being paraded on the turf course before entering the winner's circle. Winning jockey Martin Dwyer said, "I'm stunned. It was an amazing feeling today to win this race. I was a bit concerned early on because he jumped a bit keen, but I managed to get in behind in the back straight and came home really good. I had plenty of horse underneath me. I just had to be a bit patient, there were horses in front of me and they were actually dropping back, I was just waiting for the split, when I got it, he went. I work the horse for Andrew twice a week so I know him very well. It's great to travel and ride in these World Series races and to come over and win is a dream come true." 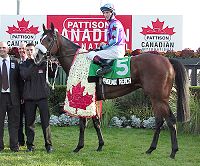 Phoenix Reach in the winner's circle with jockey Martin Dwyer up. Winning trainer Andrew Balding said, "I have been very lucky, I have taken over a yard of talented horses and some good staff. I am thrilled. I was just worried whether he had the trip running that keenly, but Martin did a great job. We dropped back from a mile and six (furlongs) in the St. Leger to mile and a half, which is his trip really. It wouldn't surprise me if he won a good race over 10 furlongs one day." 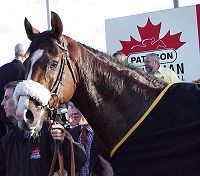 Phoenix Reach up close. His trainer said, "Six months ago in the spring he had a plate and three pins [in his pastern] and we honestly didn't think he'd ever race again. He's come back great. He won his maiden easily and he's been fairly sound ever since." 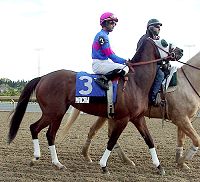 Second place finisher Macaw in the post parade. His jockey Shaun Bridgmohan said, "He is such a little horse, he laid his heart out. He gave me everything he had, he gave a gallant effort. It's nice to ride a horse like this, he is an honest horse, he gave me all he's got. That is all you ask". Trainer Barclay Tagg added, "This horse always goes out there to run. He may not always be the fastest, but he always runs his race." 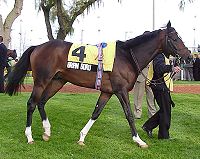 Third place finisher and favorite Brian Boru. He was a bit rambunctious in the walking ring and may have left too much there or just waited too late to make his run on the yielding course as he was still 8th with only a 1/4 mile to go.