A well-matched field of eight faced the starter in the 65th running of the Grade 1 Canadian International at Woodbine. Sent off as the 3-1 favorite was Falcon Flight, who was sixth in last year's running but placed fourth due to a double disqualification. In his last start he was fifth in the Arlington Million but only lost by a neck in a blanket finish. For this race he got a new rider in top California jockey Pat Valenzuela. Heavy rains on Friday made for a yielding turf course, which must have been quite boggy given the slow times for all the turf races on the card.

When the gate opened, Paolini, the 3.35-1 third choice, got off to a sluggish start which took him out of contention immediately leading to a disappointing sixth place finish. Yavana's Pace, the oldest Group 1 winner in history at age ten, broke slowly but was rushed up to the front right away by Keith Dalgleish, ironically the youngest jockey in the field. Loose on the lead for the first mile, he set easy fractions of 25.52, 52.03, 1:17.97, and 1:43.07 over the yielding turf. Mick Kinane aboard 4-1 fourth choice Ballingarry from the powerful Coolmore team settled in behind him as the pair saved ground the whole way. Falcon Flight raced to the inside of the pack early on, stalking the pace back in fourth.

As the field turned for home Kinane asked Ballingarry for his run, and he didn't disappoint. Swinging to the outside of the pacesetter, he drew even with him late in the turn and by the quarter pole he was 1 1/2 lengths clear after 1 1/4 miles in 2:07.01. Drawing clear under steady pressure down the long stretch, he won easily in a final time of 2:31.68 for the 1 1/2 mile distance. Falcon Flight was roused entering the stretch, got to the outside but was no match for the winner, collaring Yavana's Pace in mid-stretch and finishing four lengths clear of him for second, and 2 1/4 lengths behind Ballingarry. 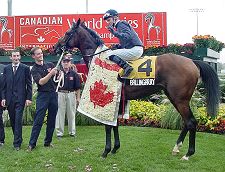 Ballingarry in the winner's circle with Mick Kinane up. Mick said after the race: "He was full of himself today, he enjoyed himself. He loved the experience and was at the top of his game." 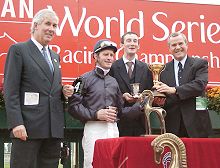 President and CEO of Woodbine David Willmot presents the trophy for the race. Assistant trainer T.J. Comerford said: "He was so relaxed here today. He came out of the barn like a perfect gentleman. He's a good horse, but we've got plenty of good horses in Ireland. This guy got his chance here today and he didn't let us down." 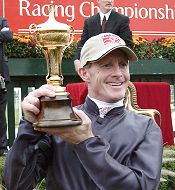 Jockey Mick Kinane poses with the trophy. He said: "This race was certainly no slouch. I think this horse is improving again. When you get a three-year-old maturing at this point in the season and going forward, the sky's the limit." 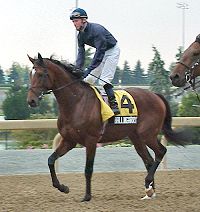 Ballingarry in the post parade. Jockey Mick Kinane said: "I knew if Yavana's Pace made the gate and got there, he would wish to go. My plan was to go to the lead or sit right off it. If the pace was going to quicken, I would try and go past Yavana's Pace. He's the type of horse that you want to get by in a hurry." 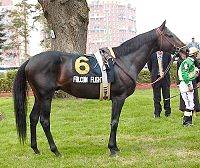 Favorite and second place finisher Falcon Flight poses for photos in the walking ring. Jockey Pat Valenzuela said: "I had a pretty relaxing trip the whole way until about the 3/8 pole, when the jockey in the blue and white [Andreas Suborics on Paolini] put me up on top of the rail, putting me in very tight quarters. Me and my horse dropped back at that point and we hit the rail. He has a pretty good white mark on him. He ran a good race considering all that happened. The race was a little bit slow, the leader kept running and the horse in second ran off pretty good, and I didn't have enough to get him the last part." 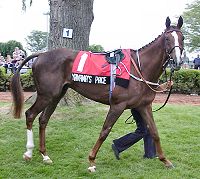 Third place finisher Yavana's Pace in the paddock. Jockey Keith Dalgleish said, "He jumped out, traveled well, got a nice breather in him down the back. He just kept going down the lane. Really, he's probably not as good as the first two, but for a 10-year-old to run a race like that is brilliant." 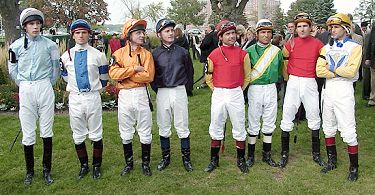