In the 47th running of the Grade 1 E. P. Taylor Stakes for older fillies and mares, a compact field of six faced the starter hoping for a ticket to Chicago for the Breeders' Cup Filly and Mare Turf. Sent off as the even-money favorite was Volga, last year's runner-up, coming off a fourth place finish in the Beverly D at Arlington. Heavy rains on Friday made for a yielding turf course, which must have been quite boggy given the slow times for all the turf races on the card.

In the early stages, Neil Drysdale trainee Nadia got an easy lead under Corey Nakatani and walked through an opening quarter in 29.70 and a half in 57.93. Volga stalked her to the outside from about 2 lengths back. Kevin Darley sent his 11-1 shot Fraulein to the lead on the far turn, easily putting away Nadia through the inside after going 6 furlongs in 1:23.33. John Murtagh, aboard the 3-1 second choice Alasha, had raced as far back as sixth but noticing the slow fractions, also made his bid on the turn. At the top of the lane, Fraulein held her lead under strong urging by Darley, going a mile in 1:46.61. Alasha got even with Volga and took second by mid stretch. At the finish, Fraulein easily held off the late rush of Alasha by a length, completing the 10 furlongs in a pedestrian 2:10.03 over the yielding course. It was another length back to Volga in third. The final time was the sixth slowest time since the race was moved to 10 furlongs on turf in 1968, and the slowest ever on the new turf course which was opened in 1994. 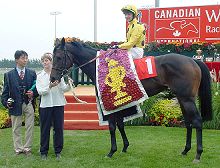 Fraulein in the winner's circle with Kevin Darley up. He said: "I actually won my first classic a week last Saturday at Doncaster in the St. Leger. It took a long time getting there but I seem to be on a roll. My filly gets 1 1/2, and we literally walked for the first 3/4 mile. When I saw a gap on the inside [of Nadia] my filly quickened to get there and then she stays on. I just edged up the inside and when I asked her she lengthened her gallop all the way to the line." 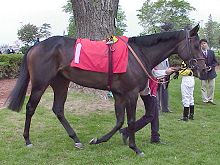 Fraulein in the paddock prior to the race. Peter Boothman, assistant trainer for Edward Dunlop, said: "The fractions didn't worry me at all as long as they did go eventually, because she does have a great turn of foot and when she kicks on, and got those three or four lengths on them, that meant they would have a tough time to catch her." She will make her next start in the Grade 3 Pebbles Stakes at Belmont on October 14th. 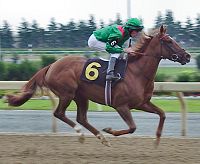 Second place finisher Alasha warming up before the race. Jockey Johnny Murtagh said: "She was a bit keen early on, it was a slow pace. The front two [Nadia and Volga] had it too easy up front for too long. I was 2 lengths behind turning for home, and I made up 2 lengths the winner had too easy a lead for too long." 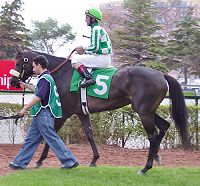 Third place finisher Volga in the walking ring. Jockey Jerry Bailey said, "It was a pedestrian pace. You could have timed it with a sundial. But my filly didn't quicken off of it very well. I might have been better off to let her run more in the middle of the race or the first part of it." 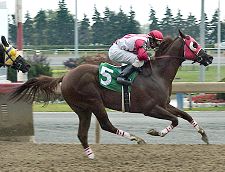 Two other stakes races were on the Canadian International undercard. Earliest in the card was the Grade 3 Highlander Handicap for sprinters going 6 furlongs on the main track. Odds-on favorite Wake At Noon did not disappoint, assuming command in mid stretch and holding off the late run of 3-1 second choice Cheap Talk in a time of 1:09.72. Trainer Abraham Katryan said, "It was no shock to see the way he ran today, but I think he can be even better than he showed. He's the pride and joy of the barn and he gets better every day." Jockey Emile Ramsammy added, "He's just awesome right now and he just gets better with age. He's just a terrific athlete."
Results chart Race 3 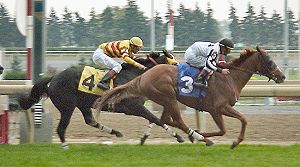 Closing out the busy day of racing was the inaugural running of the Chief Bearhart Stakes for older horses going 1 1/4 miles on the turf course. 5.40-1 shot Stage Classic stalked pacesetter Kimberlite Pipe the whole way around the course and then put him away deep in the stretch, holding off late charging Queensgate, completing the distance in 2:06.08, almost four seconds faster than the E.P. Taylor Stakes. Trainer Dave Cotey said, "He always tries his heart out and he made no mistakes. He got the job done." Jockey Ray Sabourin added, "He keeps going and doesn't seem to tire. I thought Kimberlite Pipe was going to steal it, but he really dug in."
Results chart Race 10