The Grade 1 E.P. Taylor Stakes is the companion feature of the Pattison Canadian International. The 1 1/4 mile event over the turf for older fillies and mares with a $750,000 purse drew a field of eight, down from the originally entered ten after local horse Inish Glora and California shipper Dimitrova scratched out of the race the day before. Sent off as the 11-10 favorite was Punctilious, a 3-year-old filly from England owned by Godolphin, with regular rider Frankie Dettori in for the ride. Top trainer Bobby Frankel entered the French-bred Commercante, the 5-2 second choice.

When the gate opened, French shipper Ometsz went for the early lead under Edgar Prado, who tried to slow the pace down getting the half in 50.87 and the mile in 1:40.05. Local hopes Mona Rose and Heyahohowdy kept close contact with Ometsz into the home stretch. Turning for home, jockey John Velazquez took Commercante wide, as did Dettori aboard the favorite Punctilious. Punctilious got her head in front of Commercante a furlong out, but Commercante had a bit more left in the tank, battling back in the final 1/16 mile to beat Punctilious by just a head, in a final time of 2:04.02 over the "good" going. It was just a neck back to 10-1 local horse Classic Stamp in third. Three claims of foul were issued against 2nd place jockey Dettori for interference, two at the top of the stretch and one at the 1/16 pole but al were disallowed by the stewards. 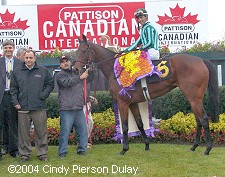 Commercante in the winner's circle with trainer Bobby Frankel on the left. Frankel said, "She would have had to be supplemented (to the Breeders' Cup Filly and Mare Turf). I'm not a big believer in supplementing, for a lot of money, to be honest with you. We had this race. It was good enough money, only $250,000 less than the Breeders' Cup. He (Velazquez) was riding a good race and saved ground around the turn when they came out in the straight. She's got a very good turn of foot, so I really wasn't concerned when he whipped her out. I knew we had plenty of horse. In the middle of the stretch, she looked like she was hanging but then it might have been my eyes deceiving me. But she finished really well." 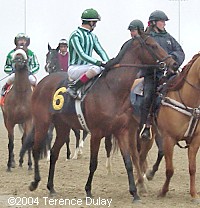 Commercante in the post parade. Winning jockey John Velazquez said, "I learned that she needs to be farther back. The last time when I rode her there was no pace. I couldn't really get behind horses. Today, she broke a little slow, was covered up and she came right off the bridle and kind of made it easier for me to not be fighting with her." 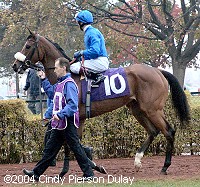 Second place finisher and beaten favorite Punctillious in the walking ring. Her jockey Frankie Dettori said, "She ran big, but today she caught one that was just too good." 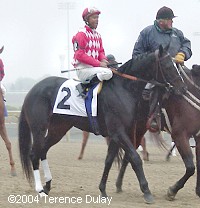 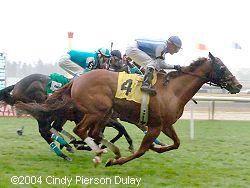 Kicking off the stakes action was the Grade 2 Nearctic Stakes, a 6 furlong handicap on the turf. In a blanket finish, 27-1 longshot I Thee Wed rallied down the center of the course to get his neck in front of 6-1 shot Chris's Bad Boy, who was a neck ahead of 5-4 favorite Hour of Justice in third. Final time was 1:09.36 over the good course, as locally based horses swept the first four places. Winning jockey Jim McAleney said, "I thought I was going to run out of ground, but the wire was far enough away. The horse was storming home quick enough that we got there." Trainer David Bell added, "It looked like a tough race, but I thought he was on the top of his game. If it set up for him, it set up for him - and it did. He's been improving the whole year in bits and pieces and had a few bad races with some excuses. He's a nice horse, he was just waiting for his time."
Results chart Race 3