The 67th running of the Grade 1 Pattison Canadian International was contested at Woodbine on Sunday afternoon October 24. Despite being scheduled just six days before the Breeders' Cup Turf, a quality field of ten entered the gate in the $1.5 million event including four from Europe. Sent off as the 4-5 odds-on favorite was Sulamani, representing the powerful Godolphin stable with top international rider Frankie Dettori aboard. Also in the field was last year's third place finisher Brian Boru from the barn of Aidan O'Brien, who was the 5-1 second choice, and the top American-based horse in the field, Bob Baffert-trained Senor Swinger, at over 9-1. It was a damp and cold day following overnight rains with a constant drizzle, degrading the usually rock-hard E.P. Taylor Turf Course to a rating of "good".

When the gate opened, 35-1 local hope Burst of Fire went to the front and led the field through a quarter in 24.58 and a half in 49.86. Dettori kept Sulamani at the back of the field in the early stages, saving ground along the rail through the clubhouse turn, while jockey Jamie Spencer kept Brian Boru in last, but keeping close contact with the favorite. Midway down the backstretch, 22-1 shot Sabiango inherited the lead, going 3/4 in 1:14.27 and a mile in 1:38.95. Entering the turn for home, 21-1 shot Simonas, who had also trailed the field early, came out five wide and collared Sabiango at the top of the stretch, getting the 1 1/4 miles in 2:04.91. Simonas looked home free at the 3/16 pole, but Sulamani, who had come out entering the straight, was closing like a freight train and blew right by Simonas with 1/16 mile to go and drove clear to win by 1 1/2 lengths in a final time of 2:28.64. It was another 2 lengths back to Brian Boru, who also launched a late run but was left with too much to do in the stretch. It was a complete sweep for the Europeans, as 6-1 shot Mubtaker finished fourth. 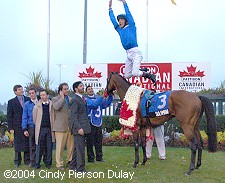 Frankie Dettori makes his famous leap from Sulamani in the winner's circle. He said, "He's got an explosive turn of foot, but I was concerned at the time, Kieren (Fallon, aboard Simonas) kept me boxed in and when he kicked he opened the race up for me and I knew through tremendous acceleration that I would get it. Kieren had first run on me, it took three lengths out of me, but I managed to close the gap and go the past him pretty easily. He has tremendous turn of foot." 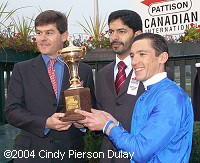 Simon Crisford, racing manager for Godolphin Racing, trainer Saeed bin Suroor, and Frankie Dettori with the trophy. Crisford said, "He is matched with the very best of them. He is a top-notch performer and his record is superb. He's won Group 1 races in so many different nations. He's a great international horse and top, top class. We've really enjoyed having him in the stable. He'd done so well for us." Asked about whether he would be retired now, Crisford added, "I think now maybe is the right time to retire him to stud. Sheikh Mohammed was on the phone to me almost straight after the race and he indicated that the horse has achieved so much, has had so much international acclaim that he deserves a place at stud." 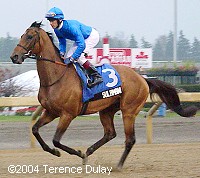 Sulamani in the post parade. Winning trainer Saeed bin Suroor said, "Sheikh Mohammed decided to run this horse today and after he won in England we knew the horse had the class, the distance and the racetrack would suit him. Frankie gave him a good ride today and we are happy with the results. Sulamani loves to be in behind and the best races he has won, he came from behind. The last two furlongs kept him close and the horse has the speed. He has a good turn of foot. We are happy with the results. This is the second time we've won this race (Mutafaweq, 2000)." 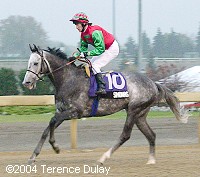 Second place finisher Simonas in the post parade. His jockey Kieren Fallon said, "He is a horse that is progressing all the time. He came in here with a chance and he ran a big race. Sulamani is one of the best horses in Europe, he had his work cut out to beat me today. I saw Frankie on the inside and I was hoping he would get into traffic problems, but he had too much horse, he came around. I kicked hard, I thought we could have won the race, it would've taken a really good horse to beat me, but we have one in Sulamani." 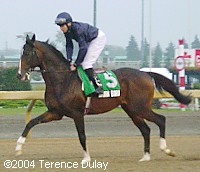 Third place finisher Brian Boru in the post parade. His jockey Jamie Spencer said, "I had a tough start, but it was a good trip otherwise. He ran well today and put in a very honest effort. It was a better race than last year's race here."