There were two other graded stakes races on the undercard of the Woodbine Mile. The first of these was the $300,000 Canadian Stakes (G2) for older fillies and mares going 1 1/8 miles around one turn of the E.P. Taylor Turf Course. A compact field of six went to the gate in this event, with Del Mar Oaks winner Arravale sent off as the 9-10 favorite over 3-1 Ambitious Cat, winner of the Dance Smartly in her last start. Also in the field was the Todd Pletcher trained Ready's Gal, winner of the Matchmaker at Monmouth Park last out, at 5-1. 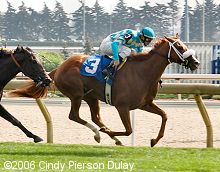 Favored Arravale was quickest out of the gate but 5-1 fourth choice Ready's Gal was hustled up to the front by jockey Ramon Dominguez. The pair battled up front through fractions of 23.10 and 47.15, with the field staying close together, with no more than 4 lengths between first and last coming into the stretch. Dominguez asked Ready's Gal for run at the 3/16 pole and got it, as the Todd Pletcher trainee surged to a 2 length lead with a furlong to go. Jockey Jose Valdivia Jr. responded with the whip on Arravale who put in a strong late effort of her own but Ready's Gal held her off by just half a length at the line to win a time of 1:46.56 over the firm course. It was just 3/4 length back to 14-1 Elle Runaway in third, who just held off Ambitious Cat by a nose for third.
Results Chart from DRF. 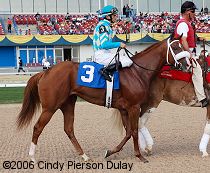 Ready's Gal returns after the race. Winning jockey Ramon Dominguez said, "She relaxed nicely, and kicked on pretty good down the lane." 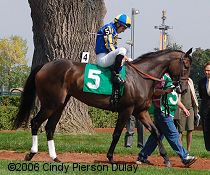 Second place finisher and beaten favorite Arravale in the paddock. 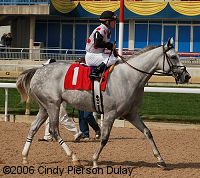 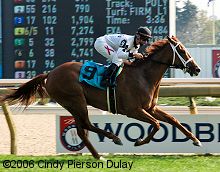 The $250,000 Summer Stakes (G3) featured 2-year-olds taking the Woodbine Mile trip of 1 mile around one turn on the turf course. Nine went to post here, with Marcavelly sent off as the 6-5 favorite off his win in the Continental Mile at Monmouth in his last start. In to challenger him was 2-1 second choice Dreaming of Anna, a filly taking on the boys after a 7 length romp in the Tippett Stakes at Colonial Downs last time out, and 5-1 third choice Streets Ahead, a European shipper coming in off of two straight victories at Salisbury in England.

40-1 outsider Seaside Links went to the front right away and was quickly joined by Dreaming of Anna to his outside through an initial quarter in 23.69. The filly poked her head in front at the end of the backstretch run, as Seaside Links faded from contention after a half in 47.55. Favorite Marcavelly, who had stalked the pair in third early, moved up to take second on the turn. Entering the stretch, jockey Rene Douglas asked Dreaming of Anna and she responded, pulling away to a 2-length lead at the eighth pole. Marcavelly was no match for her late kick as she drew away to a commanding 3 1/4 length victory in a time of 1:35.03, just 3/5 of a second off the stakes record. It was a long 4 3/4 lengths back from Marcavelly to 55-1 outsider Orna in third, while Streets Ahead was fourth.
Results Chart from DRF. 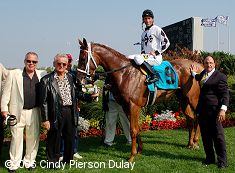 Dreaming of Anna in the winner's circle. Winning owner and breeder Frank Calabrese said, "It's a great feeling. I bred her and her brother (three-year-old) Lewis Michael. She's named after my sister." Winning trainer Wayne Catalano added, "I told Mr. Calabrese, I think we have something very, very special here. We have the Breeders' Cup in the back of our minds." Winning jockey Rene Douglas said, "I think she's the best filly I have ever ridden in my life. I've been on nice fillies before, but this filly gives me goosebumps. I think people are going to fall in love with this filly. She made the boys look bad today. All the girls will be rooting for her down the road." 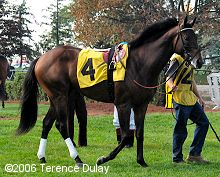 Second place finisher and beaten favorite Marcavelly in the paddock. 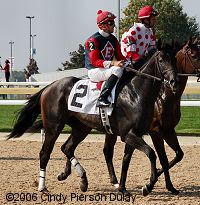