The highlight race at Woodbine every September is the $1 million Woodbine Mile (G1). In this year's edition, thirteen older horses went to the gate facing a 1 mile trip around one turn of the E.P. Taylor Turf Course. There was no clear favorite, with Oceanport Stakes winner Three Valleys sent off as the 3-1 choice over 9-2 Remarkable News, winner of the Fourstardave at Saratoga in his last start. Also in the field were 5-1 Ad Valorem, shipping in from Ireland from the powerhouse stable of trainer Aidan O'Brien, and 6-1 fourth choice Rebel Rebel, winner of the Poker Handicap but third in the Oceanport last out.

As expected, a hotly contested pace ensued with 10-1 Sweet Return leading the field down the backstretch through fractions of 22.86 and 45.12, while being stalked by Remarkable News and 48-1 outsider Shoal Water. Rounding the far turn, Remarkable News took over the lead but the fast early pace set the race up perfectly for the closers. After racing back in eighth in traffic early, 8-1 shot Becrux came out wide on the turn and rallied down the center of the course under patient handling by new jockey Patrick Valenzuela. Rebel Rebel was at the rear of the field down the backstretch and he too found running room through the long Woodbine stretch and was closing the gap with every stride. At the 1/8 pole, Becrux took the lead away from the fading Remarkable News, and through the last 1/16 of a mile, held off the on-rushing Rebel Rebel to win by just a neck in a time of 1:33.99. It was 1 1/4 lengths back to late-running Ad Valorem in third, while favorite Three Valleys put in a late drive but flattened late to finish seventh. 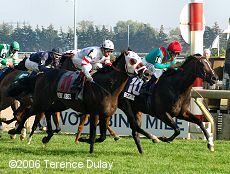 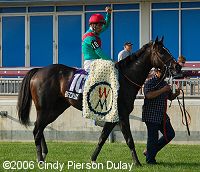 Pat Valenzuela celebrates aboard Becrux and they are led down the turf course after the race. Valenzuela replaced originally scheduled rider Corey Nakatani who was injured in a training accident on Saturday morning. Valenzuela said, "Yesterday morning, I was working horses at Hollywood Park, my agent called me and told me that Corey had a sore shoulder." Valenzuela had not ridden since July 16 due to back pain, and the Woodbine Mile was his first race back from that injury. He added, " I think I'm feeling better than when I was riding eight or nine horses a day. I'm taking care of my body and doing the right things. Canada's been very, very, good to me. I followed Three Valleys through the stretch. I was going to go to his inside, but then he came out, and I went back to the outside around the eighth pole. I whipped my horse a little, and he took off very willingly." 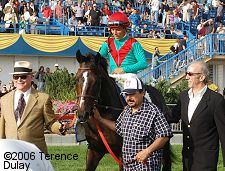 Team Valor managing partner Barry Irwin (left) and co-owner Gary Barber (right) lead Becrux and Pat Valenzuela as they parade for the fans. Barber said, "I had a great group of friends from Toronto here. It was just the most amazing thing and just thrilling to come down and watch him. He's lived up to expectations in the last three races. Before that, he was a bit of a disappointment." Barber is a co-founder of Spyglass Entertainment, producers of Seabiscuit among their many movies. 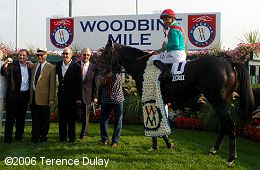 Becrux in the winner's circle with his happy connections. Trainer Neil Drysdale, winning his third Woodbine Mile after Labeeb in 1998 and Touch of the Blues in 2003 said, "Well, he didn't care for the ground (in his last start, a loss in the Play the King), and he sort of fell back a quite a ways, and when he hit a firmer ground, he came on when a very nice run. We felt that it encouraged us to run this race. The horse had done very well, (co-owner) Barry Irwin decided to geld this horse, and he has done very well since, he has just continued to improve. . We were very pleased with the race today." 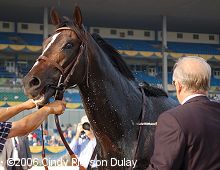 Trainer Neil Drysdale hoses off Becrux after the race. Barry Irwin, manager of co-owner Team Valor, said that Becrux would start next in the Shadwell Mile at Keeneland and then return to his Hollywood Park base. He said he would not supplement Becrux to the Breeders' Cup Mile. 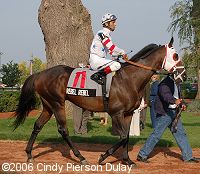 Second place finisher Rebel Rebel in the paddock before the race. His jockey Edgar Prado said, "It set up beautiful. There were a lot of horses with a lot of speed in the race. I was at the back of the pack just biding my time. Unfortunately, I wasn't able to save some ground into the turn. That could have made the difference at the end. He ran a good race. I hope he comes back good." 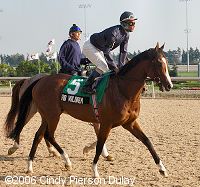 Third place finisher Ad Valorem in the post parade. His jockey Patrick Husbands said, "Mr. O'Brien (trainer Aidan) told me my horse doesn't like a cut to the going. Down the backside, my horse was spinning his wheels. I wasn't going anywhere. When he reached the nice surface down the lane, he was running. When I got back, his right shoe was gone." 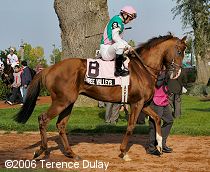 Seventh place finisher and beaten favorite Three Valleys in the paddock before the race. He got as close at fourth at the 3/4 mark, but faded down the lane.