A quality field of 13 faced the starter for the sixth running of the Grade 1 Atto Mile at Woodbine, looking for the winner's share of the $1 million purse and possibly a trip to the Breeders' Cup Mile at Arlington. Sent off as the 5-2 favorite was Noverre from the powerful Godolphin Stable, with regular rider Frankie Dettori getting the mount. Other highly regarded entrants included Allen Paulson Living Trust's Del Mar Show, 1999 Atto winner Quiet Resolve, and Wally Dollase trainee Good Journey.

Noverre was first out of the gate, but was immediately taken back by Dettori which allowed the 55-1 longshot filly Chopinina to gain the lead. Jockey Emile Ramsammy settled her just off the rail with 96-1 shot Regal Mister to her outside. They ran the quarter in a brisk 22.77 and the half in 44.97 over the very firm turf course. By this time Chopinina was over two lengths clear of her competition. As the field rounded the turn, Chopinina continued to hold onto her lead as a cavalry charge ensued behind her. Regal Mister dropped out of contention and eventually finished last while Pat Day and Good Journey, the 3-1 second choice, made a three wide bid from sixth place. Nuclear Debate, at 17-1, was last out of the gate but despite traffic trouble managed to get to the outside for the drive. After six furlongs in 1:08.92, Chopinina was still clear and continued strongly down the stretch. Good Journey gained with every stride and caught the pacesetter in the final furlong to win by a hard fought length, in a final time of 1:33.27 for the mile. It was a neck back to late closer Nuclear Debate, and another neck back to 27-1 shot Moon Solitaire to complete the superfecta. The favorite Noverre was never in contention, attempting a late rally from far back but could only manage sixth at the line. Del Mar Show also disappointed with a tenth place finish, coming up empty when Jerry Bailey attempted a rally from ninth place. 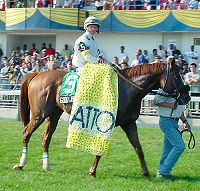 Good Journey parades for the fans after his win. Winning jockey Pat Day said, "He went into the gate, nice, sharp and clean, and the speed outfooted us, we were fifth or sixth going into the turn, and just biding our time. Coming to the head of the stretch, he was just cruising on the outside, I felt I had the filly on the lead at any time, I was waiting for the opposition, about 3/16th before I went in, I squeezed him and he responded beautifully. He knows how to win. He's just a brilliant horse. He's got a great mind and he's fun to ride." 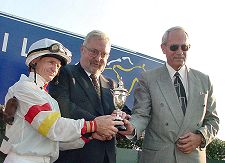 Race sponsor John Atto presents the trophy to jockey Pat Day and trainer Wally Dollase. Dollase said, "The reason why I am here is that it is a Grade One race, and it is very important to this horse because he's got a very nice pedigree and I think he'll make a good sire down the road. He's got a great mind and the whole thing. And, of course he just had it today. I couldn't be happier. He was sharp as a tack, He runs good fresh, there was no mile race between the last one and this one, so I thought, 'What the heck?' Let's just train him up to the race, he was training well. I really enjoyed being here today." 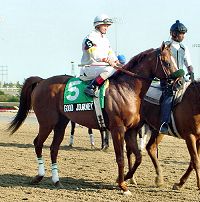 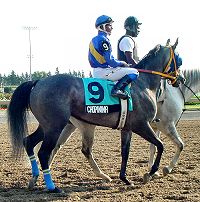 Second place finisher Chopinina in the post parade. Her jockey Emile Ramsammy said "My filly ran her eyeballs out. She ran a grand race. Unfortunately, she didn't win it. I don't have any excuses, but she ran well. She's a filly taking on the boys. She showed she fits well." 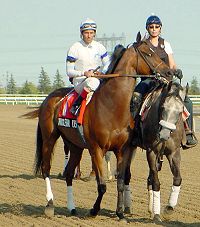 Third place finisher Nuclear Debate in the post parade. His jockey Gary Stevens said, "I had a great trip. Got on the inside, saved ground, got out down the lane and put in a great run. It was a hell of a race for his first mile. I was very happy with it." 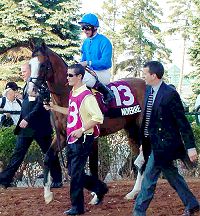 Beaten favorite Noverre in the paddock prior to the race. His jockey Frankie Dettori said, "I had a killer draw, post 13. It was impossible to win from there. I was four wide, then turning for home, the others were gone. It's too far to win from there if they don't run a killer pace. We lost too much ground around the turn and the race was over then. If there are more than eight runners, you have to get out closer to the front." 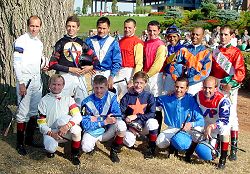 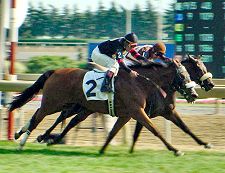 On the undercard were two other turf stakes events. The Grade 2 Canadian Stakes featured the older fillies and mares going about 1 1/8 miles. 3-2 favorite Calista did not disappoint her backers, coming from off the pace to win by a nose, just holding off another late charger in a stretch duel, last year's winner and the 2-1 second choice Diadella, in a time of 1:45.04. Results chart Race 6 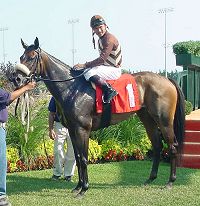 Calista in the winner's circle. Jockey Corey Nakatani said, "She's very special. I was really patient with her. When I called on her, she quickened and held on." Nicholas Bachalard, assistant trainer to Christophe Clement, said, "She ran very well. We were very confident, but you never know. She's been training very well at Saratoga and we're very happy." 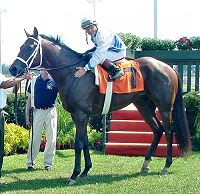 The Grade 2 Summer Stakes at a mile featured the two-year-olds. Pat Day got ready for his Atto win later in the afternoon by capturing this event aboard 3-2 favorite Lismore Knight. Through the long Woodbine stretch he locked horns with 4-1 shot Wando but prevailed by a head in a time of 1:35.33. Ginny DePasquale, assistant to trainer Todd Pletcher, said, "It was absolutely impressive. He bobbled a bit coming from the gate. Pat just took his time. He's really patient and just let him run his race and really got after him in the stretch. I had a good feeling (going into the race). But with two-year-olds, you never know what they are going to do. This is a nice horse, well-behaved." Results chart Race 3