In one of the key prep races for the Breeders' Cup Mile to be run at Santa Anita in October, a field of eleven took to the Woodbine E.P. Taylor Turf Course in the seventh edition of the Grade 1 $1 million Atto Mile. It was also Canadian Triple Crown winner Wando's first start since capturing the Breeders' Stakes, with his connections testing him for a possible BC Mile start rather than take on the heavy hitters in the Classic. The very partisan Woodbine crowd obviously bet with their hearts, as they sent him off as the lukewarm 3-1 favorite, with another locally based horse, Perfect Soul, the second choice at 7-2, and yet another local, Soaring Free, the third choice at 9-2.

As expected, the pace was hot on the front end right away, with crack sprinter and defending Canadian Horse of the Year Wake At Noon leading the way immediately with Soaring Free and the mare Chopinina right with him. Wake At Noon gained a clear lead after an initial quarter in a brisk 22.84 seconds. After a half in 45.38, Wake At Noon lost the lead to Chopinina to his inside. Meanwhile, favored Wando raced back in fourth early in good position, moving into contention on the turn.

Patrick Husbands got Wando to the front at the top of the stretch, after 3/4 in 1:09.38, but the quick early pace took its toll and his lead was short lived. Down the lane, Soaring Free put Wando away inside the 3/16 pole, and looked to be homefree. However, 5-1 shot Touch of the Blues with Kent Desormeaux aboard had plenty left after relaxing as far back as ninth early. Taking a wide route around the turn, he charged for the leaders out in the five path and blew right by both Wando and Soaring Free in the final furlong to win by 1/2 a length, in a time of 1:33.39 over the firm course. It was another 1 3/4 lengths back to Perfect Soul, who trailed in last until the top of the stretch but launched a tremendous late rally to just catch Wando by a head in the final strides. 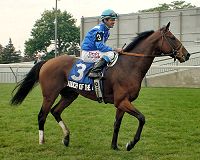 Touch of the Blues returns after the race. Winning jockey Kent Desormeaux, winning his second Atto Mile, said, "He was very quiet, very comfortable, a nice comfortable stride tearing along lightly, I wasn't concerned at all until it was the time to take the fight to him. I was able to give him a clear path at the leaders, and he just took off on his own, he knew it was time to go. This guy stuck to his task, grinding him out and inching to the leaders. I love this track. It has an eternity of stretch and class can prevail. If this were Del Mar I would have been beat 2 lengths." 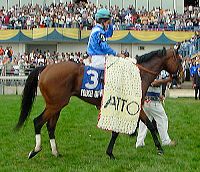 Touch of the Blues parades for the crowd with his Atto flowers. Comparing Touch of the Blues with his 1998 winner, Desormeaux said, "One of my greatest accomplishments in riding is never getting dropped by Labeeb. Labeeb was a little more explosive, you had to be careful when you pushed his button. I can present this horse much earlier." Asked about last year's Breeders' Cup Mile, Desormeaux added "My horse's chest bounced off the rump of [Landseer, who broke down at the top of the stretch at Arlington], so he was a very unlucky loser. I hope this year he gets his due." 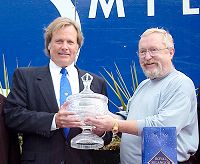 Race sponsor John Atto presents the trophy to Allen Kershaw, vice-president and general manager of Gainsborough Farm's North America operations. Kershaw said, "I love to come to Canada. Neil [trainer Drysdale] is going to train the horse up here [until the Shadwell Mile] He told me he loves this track, he loves to train on it, and this suits his horse perfectly." 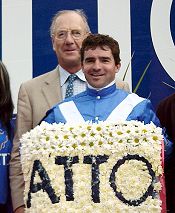 Trainer Neil Drysdale and jockey Kent Desormeaux were all smiles after the race. Drysdale said, "It was a lovely race to come up here and win and I'm very happy for Gainsborough and Sheikh Maktoum Al Maktoum. He's been very gracious, sending us lots of really nice horses and here's another one." Drysdale indicated that Touch of the Blues will go on to the Shadwell Mile at Keeneland on October 4 and from there decide if he will go on to the Breeders' Cup. The win was Drysdale's second in the Atto, his first being with Labeeb in 1998, also owned by Gainsborough and ridden by Desormeaux. 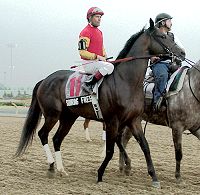 Second place finisher Soaring Free in the post parade. Jockey Todd Kabel said, "A world-class horse beat us just now. My horse ran a tremendous race. He dug in game and [Touch of the Blues] showed he was gutsy horse last year in the Atto Mile and this year he came back and did it this year." 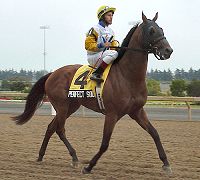 Third place finisher Perfect Soul in the post parade. His jockey Jose Santos said, "I just wished I had known this horse a little more, But he ran a good race. He tried hard. He closed good." 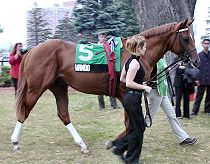 Fourth place finisher and fan favorite Wando in the paddock prior to the race. Jockey Patrick Husbands said, He had a perfect trip, Wando ran 110 per cent. You really got to take your hat off to Wando, after winning the Triple Crown. He's only three years old and tackling the best sprinters for which is a mile in the world, he ran a fantastic race." Trainer Mike Keogh added, "I think his effort was excellent, he was with some old pros and they just beat him, that is all." Asked if the Breeders' Cup is still a possibility, "We will see after the race, see how he'll come out of it, I hope we will, yes. But, give us a little time to digest it. He's a wonderful horse." 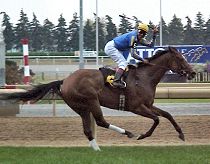 On the undercard were two Grade 2 events on the turf. The $309,000 Canadian Stakes featured older fillies and mares going 1 1/8 miles. 10-1 shot Inish Glora stalked the pace through a half in 47.08 then gained the lead turning for home, prevailing by 1 3/4 lengths over 5-4 favorite Volga in a final time of 1:44.56. It was another 1 3/4 lengths back to 2001 winner Diadella. Trainer Mac Benson said, "The trip in general was pretty much what Todd and I had talked about it. Todd couldn't have ridden her better."
Results chart Race 9 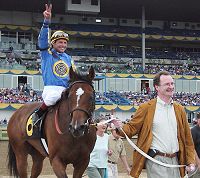 Todd Kabel celebrates while Inish Glora is led to the winner's circle. He said, "We just wanted a nice stalking trip and be right there turning for home and that's exactly what we did. I had all the horse I needed today." 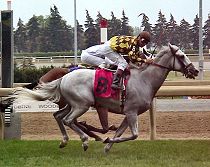 The $285,500 Summer Stakes featured the two-year-olds going a flat mile. Incidentally, Wando finished second in this event one year ago. In this edition, 13-1 longshot Bachelor Blues led every step of the way under Todd Kabel, holding off the late charge of Victory Light to win by a neck in 1:34.95. It was another 5 lengths back to Commendation, who was disqualified to tenth for interference with last place finisher Zakocity on the turn. Trainer Josie Carroll said, "We had a lot of concerns if this horse was on the lead, whether we would finish. He does tend to get a little lazy when he gets on the lead. We spent a lot of time trying to teach him to rate the last month. Clearly he has a mind of his own."
Results chart Race 9 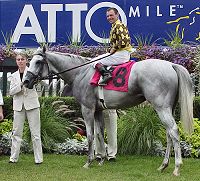 Bachelor Blues in the winner's circle. Jockey Todd Kabel said, "We wanted to get him to rate today, but he showed he was the speed. I just had to get him to relax as much as I could. I had so much horse underneath me turning for home. It was a matter of getting him to finish up strong because he's known to loaf. His head came up on me and he started running sideways with me down the lane. I had concerns. But he got the job done and I’m just very thankful. It's very satisfying, any victory is satisfying but a stakes race, there's always a little more to it."