Finally after so many failures over the last few years in both Canada and the United States, a new Triple Crown winner has been crowned. Wando came into the final leg of the Canadian Triple Crown as a dominant 1-2 favorite after crushing the competition in the first two legs and he did not disappoint his fans. Seven rivals were on hand to try and deny him, with Toronto Cup Handicap runner-up Strizzi as the 5-1 second choice and a powerful trio of runners from Sam-Son Farms getting support as well. The Breeders' Stakes not only is the furthest distance any of the field has ever run, it is run over turf. However, only one of the 8 contestants, 17-1 shot and Prince of Wales Stakes runner-up Arco's Gold, lacked race experience over the lawn.

When the gate opened, jockey Robert Landry sent Sam-Son representative Parasail to the front as expected to ensure an honest pace. He led the field for the first mile, rattling off respectable fractions of 23.94, 48.83, 1:13.44, and 1:38.93 over the firm E. P. Taylor Turf Course. Patrick Husbands kept Wando well to his outside, away from trouble, settling in second place a length or so back from the pacesetter, going four wide on the first turn and five wide on the second turn. 7-1 shot Shoal Water, also from Sam-Son Farm, pressed the pace in third while his stablemate, 17-1 shot Colorful Judgement, stalked the three leaders in fourth.

Turning for home, Shoal Water grabbed the lead as Parasail gave way. Wando, who had ducked inside of Parasail on that turn, dropped back slightly to get out of the pocket then suddenly swung out wide for his rally. With 3/16 of a mile to go, he took the lead from Shoal Water and drew clear by 1 1/2 lengths in the final furlong, holding that advantage to the finish under Husbands' left-handed whip. The final time for the 1 1/2 mile contest was 2:28.69, equaling Chief Bearhart for fourth-fastest in stakes history. It was another 3 1/4 lengths back from Shoal Water to Colorful Judgement in third. Second-choice Strizzi finished out of the money 5 lengths back of Colorful Judgement in fourth. 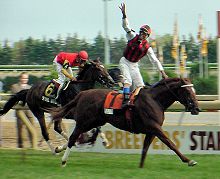 Another view of the finish from a bit farther up the stretch. Winning jockey Patrick Husbands said, "It's a great feeling, it is a blessing for any rider to get on a horse like him. He'll just do anything you want him to do and he responds when you want him to respond. I must say what a fantastic feeling it is. I achieved the three big races I really wanted to win in my whole riding career. I told [trainer] Mike [Keogh] I didn't want to disappoint this horse, but we were going so far, I just wanted him to relax. I was behind the whole way, trying to get him to relax." 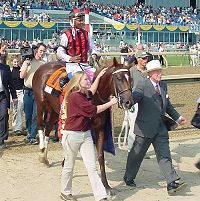 Gus Schickedanz, the 74-year-old owner and breeder of Triple Crown winner Wando, leads Wando and Patrick Husbands to the winner's circle. He said "[I feel] like a million bucks...actually I'm shy, $800,000. It was no problem[(going into the race]. This was a beautiful race. He just galloped for home. Amen. He had to take a few steps sideways but that's no problem. He's got all the extra steps." 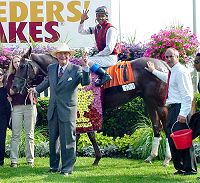 Wando in the winner's circle with Schickedanz and trainer Mike Keogh. Keogh said, "He kind of got ganged up on [by Sam-Son Farms] pretty good, but that is horse racing. I probably would have done the same thing if I had been in anyone else's shoes. I am always nervous, but especially going with the chance of winning the Triple Crown, I was even more nervous. Once I saw him [jockey Patrick Husbands] switching to the outside, I knew he had a lot of horse." 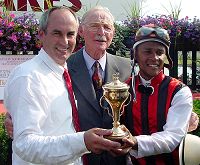 Keogh, Schickedanz, and Husbands pose with the Breeders' Stakes trophy. When asked about the future plans for Wando, trainer Mike Keogh said, "We've got options. He's nominated to the Super Derby [Louisiana Downs, Sept. 20], there's also the Pennsylvania Derby [Philadelphia Park, Sept. 1] coming up soon. There's lots of options for him. We've just got to sit down and kind of map out a plan for him." 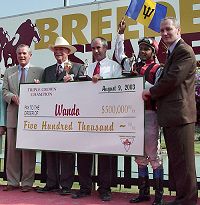 The Triple Crown bonus check presentation with Dave Willmot, Gus Schickedanz, Mike Keogh, Patrick Husbands, and an official. Husbands is waving the Barbados flag, which is his native country. Barbados was very excited about Husbands' success in the Triple Crown and even sent up a television crew to show the race live there. Husbands said, "In the Plate, he had to carry 126 pounds, but today we had a whole country (Barbados) along for the ride. This horse is a hero, he ain't finished yet" 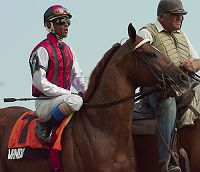 Patrick Husbands and Wando look toward the finish line in the post parade for the Breeders' Stakes. Husbands said, "This rated the toughest race in my whole entire life. You're riding the best horse and you've got people after you. Today they had a chance of beating him but there was no way [he was going to lose]. I was so happy to get to ride Wando. I knew two months ago this is the best horse in Canada." 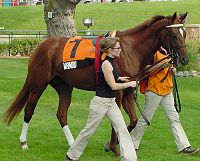 Wando in the walking ring prior to the race. You could tell he knew he was the star today by the way he was acting. Robert Landry, aboard Sam-Son rabbit and fifth place finisher Parasail, said, "My horse ran fantastic. My hat's off to Wando, though. He's an exceptional horse. He was inside of me, outside of me - we had him pinned at the top of the lane a little bit, but Patrick [jockey Husbands] tipped him out. He's a great horse and it's nice to see." 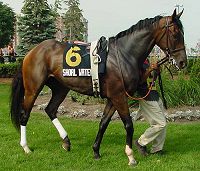 Second place finisher Shoal Water in the walking ring. His jockey Todd Kabel said, "My horse gave it all he had. He moved up on the lawn tremendously. I knew that coming into this race today. We tried. I had a great trip. I had the trip I wanted. We had Wando the whole race, you know. He [Wando] showed that he's the best horse today. I take my hat off to all of them [winning connections] and congratulate them on a Triple Crown winner. It is nice to see. I knew we couldn't beat them. My horse showed up today, he ran a big race, he improved a lot." 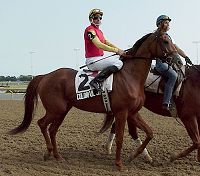 Third place finisher Colorful Judgement in the post parade. His jockey Slade Callaghan said, "My horse had a perfect trip and we saved every inch of ground. Today we just got beat by a better horse. It's as simple as that. My horse ran well. He's just learning. I think you'll see a lot from him as the season progresses, without a doubt." 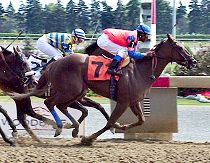 On the undercard was the Grade 3 Duchess Stakes for three year old fillies over seven furlongs. 7-1 shot Finally Here, shipping in from Kentucky for trainer Tom Amoss, outbattled 6-5 favorite Winter Garden down the stretch, winning by 1/2 a length in a time of 1:24.15 over a fast track. Winning jockey Patrick Husbands said, "She'd had four starts. This morning, Tommy [trainer Amoss] told me she's a very nice filly but she's a little bit stiff starting out. So I gave her a good warm-up. The race really unfolded as I expected. I was hoping that somebody would pressure Chantal [Sutherland, aboard Winter Garden]. I had to make sure that when I came to her, I can blow by her because I knew her filly's a real game filly. Her horse really dug in back down the lane but I just got there in time." Winter Garden was disqualified to third for interfering with third place finisher Miss Crissy in mid-stretch. 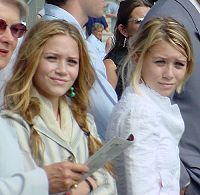