Woodbine's $1 million Atto Mile, in its short history, has become a major prep for the Breeders' Cup Mile. This year, the Grade 1 event around just one sweeping turn of Woodbine's E.P. Taylor Turf Course attracted a field of eleven, with local hero Soaring Free sent off as the lukewarm 2-1 favorite over 7-2 second choice and also locally-based Perfect Soul. Soaring Free was entering this race off of a 4 race winning streak, while Perfect Soul hadn't won since the Grade 2 Maker's Mark Mile at Keeneland in April. Among the American invaders in the race were 4-1 third choice Millennium Dragon, coming off three straight place finishes in graded stakes company, and 9-1 shot Christine's Outlaw, winner of the Grade 3 Poker Handicap at Belmont Park.

When the gate opened, as expected jockey Todd Kabel sent the favorite to the early lead, getting the initial quarter in an easy 23.48 over the very firm course, then he got Soaring Free to relax down the long backstretch run out in the 2 path allowing 7-1 shot Royal Regalia to inherit the lead along the hedge through a half in 46.01. The strategy worked perfectly, as Soaring Free showed he had plenty left in the tank for the stretch run. Turning for home he wrested the lead away from Royal Regalia, after 3/4 in 1:09.19, and then through the stretch, held off the late charge of Perfect Soul who rallied well after trailing the field early on. At the finish the margin of victory was just 3/4 length over Perfect Soul, in a stakes record time of 1:32.72. It was just a head back to Royal Regalia in third.

There were two additional graded stakes on the card which are covered here. 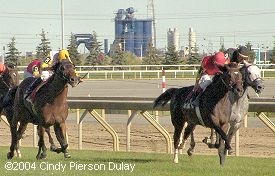 Down the stretch with Soaring Free leading with Royal Regalia on the rail and Perfect Soul coming up on the outside. Winning trainer Mark Frostad said, "Great race, great result. We didn't feel great about our (Frostad and owner Sam-Son Farm) first Atto Mile because it was by disqualification (in 1999), so it's nice to outright win these things and we've done that now and we're really happy about it. The horse that beat him last year (Touch of the Blues) is a world-class horse, so this horse is a world-class horse as well. He's more mature, he's settled down, he knows what this game is about and knows where the wire is. So he's quite willing to go along with whatever the rider wants." 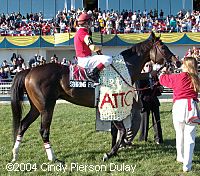 Soaring Free parades for the crowd with his Atto flowers. Asked about a possible start in the Breeders' Cup Mile, Frostad said, "Let's face it, a mile is probably the absolute maximum distance he wants to go. Seven furlongs is probably his best trip. On a smaller track like Lone Star with tight turns and a short stretch I think he'll be just as effective at the mile. We won't make the mistake we did last year by running again between the Atto Mile and the Breeders' Cup. It took too much out of him and he came up a little dull. He ran a great race, only beaten 3 lengths, but when you go into those races you have to be absolutely perfect." 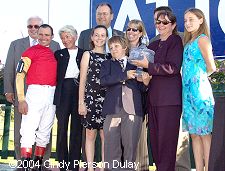 The happy connections with the trophy. Winning owner Tammy Samuel-Balaz of Sam-Son Farm was asked how special it is to have their homebred Smart Strike sire an Atto winner. She said, "Oh, well absolutely, Smart Strike was very special to us, and now he has really, really made a stamp in the breeding world, and we've always believed in him, so it is a great thrill. But this one is too. He is a sentimental favorite and a barn favorite and he gives you 110 % and you can't ask for anything more. Todd had it all, he still gave an awesome, awesome ride, and as Todd had said, Mark and the gang had him so ready for it. We can count on Soaring Free, he's one tough horse." 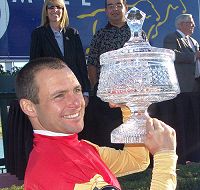 Winning jockey Todd Kabel, winning his first Atto Mile, said, "It's a tremendous feat, I've been trying to win this race for years, and I'm just very thankful to the connections for their contributions towards me. We had the outside post. If they wanted to go quicker up front we would have laid off of them but they didn't. He has been very relaxed this year, I don't know what (trainer) Mark (Frostad) did with him, that's why we call him the genius. Last time he broke in a bit of a tangle but today he was sharp and he was on his game. I let him settle into his own stride on the backside and left the rail open so if anybody wanted the lead they could have it. I was happy to let (Royal Regalia) have the lead on the turn and give Soaring Free something to run at. The horse I was worried about (Perfect Soul) came running at me down the lane. I could hear him coming and I was begging for the wire." 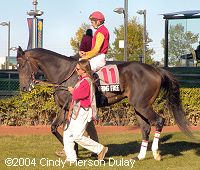 Soaring Free heads out to the track for the post parade. Jockey Todd Kabel said, "It is nice to be part of the Samuel team, I'm thankful to everyone back at the barn. (The late) Mr. (Ernie) Samuel and my father are above and they were kicking him in the butt down the lane, and I am sure that was what brought us this victory." 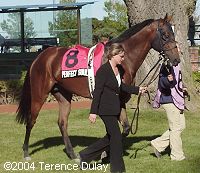 Second place finisher Perfect Soul in the walking ring. His jockey Corey Nakatani said, "Mr. (trainer Roger) Attfield did a great job with him. He fired. He did everything we wanted him to do today. The pace scenario didn't set up the way I wanted it to today. I thought there would be a little more pace in there to set it up for me. It didn't happen. I just let him make his run like you trust him to do. (The winner) just got away from further than I would have liked him." 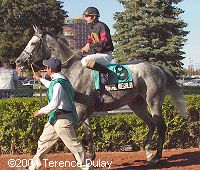 Back to the Summer Stakes and the Canadian Handicap results