The co-feature at Saratoga on Jim Dandy day is the $500,000 Diana Handicap (G1) for older fillies and mares at 1 1/8 miles on the Mellon Turf Course. A field of six went to the gate in this event, with Regret Stakes winner Lady of Venice sent off as the 6-5 favorite over 7-2 second choice Angara, second in the New York Breeders' Cup Handicap in her last start.

8-1 shot My Typhoon took over the lead first time past the stands and led the pack through fractions of 23.95, 47.94, and 1:12.22 while being chased by 9-2 Sweet Talker and 4-1 Argentina down the backstretch. Lady of Venice tracked the pace back in fourth while Angara settled in fifth. Rounding the far turn, jockey Ramon Dominguez asked Sweet Talker for her run, as the second choice went wide into the stretch and took over the lead with 3/16 of a mile to go. However, in the final furlong, Angara, who had to wait for room at the top of the stretch, split horses and was closing strongly to just get up by a head in the final stride to prevail by just a head in a time of 1:49.20 over the yielding course. It was just a nose back to Argentina in third, while favorite Lady of Venice was wide throughout and faded late, finishing fifth. 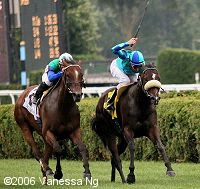 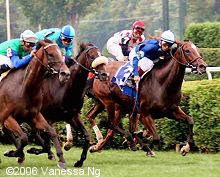 The close finish in the Diana with the top four horses all within a length of each other. Left to right are winner Angara, second place Sweet Talker, third place Argentina, and on the rail fourth place My Typhoon. It was only a head more back to fifth place Lady of Venice, the beaten favorite. 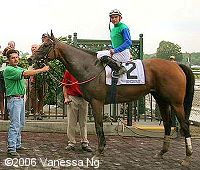 Angara in the winner's circle. Winning jockey Fernando Jara said, "I learned a little about her last time. I was happy where I was early. There really wasn't a lot of pace the first part, and she was right up there. She always does her best running at the end." 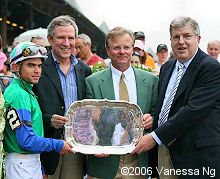 The trophy presentation for the Diana Handicap with jockey Fernando Jara (left) and trainer Bill Mott (green jacket). Mott, who was celebrating his 53rd birthday said, "I thought (Fernando Jara) did a good job. He was able to ride her last time, so he got to know her a little bit. I think he probably has a little confidence in her, so he waited for the proper time to make his run and he was able to wiggle his way through just outside the eighth-pole. She came running at the end when it counted. We had the right trip is all I could say." Mott had scratched stablemate Wend the morning of the race because of the soft going, opting to send her to the Beverly D at Arlington instead. 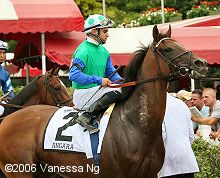 Angara in the post parade. This was the second straight win in the Diana for trainer Bill Mott who felt the yielding turf was a big factor in this win. "A lot depends on the ground, I guess," Mott said. "I've had mixed emotions about the rain. I think it cost us the Lake George with Quite a Bride. The rain took Wend's chance away and it probably hurt My Typhoon. It cost them, but it helped Angara." Her next start whould be the Flower Bowls at Belmont Park on October 7th. 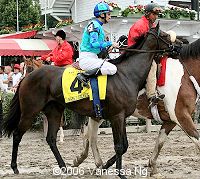 Second place finisher Sweet Talker in the post parade. Her trainer H. Graham Motion said, "It's tough to be disappointed when she ran so hard. She ran strictly on guts. I thought she ran a huge race. This race might have been longer than she wants to go against this caliber of fillies and mares, but we wanted to do this. This was a perfect opportunity for a Grade 1 race; now, we'll cut her back to a mile." Her jockey Ramon Dominguez added, "Turning for home, it seemed like she started struggling a little bit under a drive. It seems like she's getting tired, but she tries really hard down the lane. She really fought hard for that second." 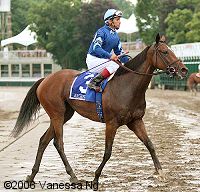 Third place finisher Argentina returns after the race. Her jockey Edgar Prado said, "We were in good position. We settled along the inside and saved ground. Once there was that opening, I thought we were home free. It was a good finish and it was close." 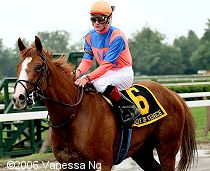 Beaten favorite and 5th place finisher Lady of Venice returns after the race. Her trainer Patrick Biancone said, "The turf was soft, so it made the race a little harder. She didn't get beat far; she got beat about three-quarters (of a length). She showed she's a contender with the best older fillies." Her jockey Julien Leparoux added, "Maybe she didn't handle the ground. The wide trip didn't hurt me. She's only three and they were older horses. She had never run on that type of ground before, but she'll be back."