The final opening weekend stakes at Saratoga was the $250,000 Go For Wand Handicap (G1) on Sunday featuring the top older fillies and mares on the east coast. A compact but contentious field of just 6 went to the gate, three from the powerful barn of trainer Todd Pletcher. Louisville Breeders' Cup Handicap winner Oonagh Maccool was sent off as the 3-2 favorite off her second place finish in the Fleur de Lis Handicap at Churchill Downs in her last start. 5-2 second choice Take D'Tour entered this race with 4 straight wins including the Shuvee and the Ogden Phipps, both at Belmont Park, while 5-1 third choice Pool Land won the Allaire du Pont Breeders' Cup Distaff on Preakness weekend in her last start.

Jockey Cornelio Velasquez sent Take D'Tour to the front right away and she battled for the lead with Pool Land to her inside, through quick fractions of 23.41, 46.49, and 1:10.50, while a length and a half clear of favorite Oonagh Maccool in third. The fast pace set the race up for the closers, as Take D'Tour yielded the lead to Pool Land on the far turn as 6-1 Spun Sugar made her run from a stalking position and 12-1 longest shot Balletto rallied from last early. Through the stretch, Spun Sugar took the lead inside the 3/16 pole, and through the final 1/16 of a mile, battled head to head with Balletto and refused to give in, getting the head bob victory in 1:49.93 for the 9 furlong trip over the fast track. It was a long 6 1/2 lengths back to Pool Land, and 3 1/2 more to Take D'Tour. Favorite Oonagh Maccool showed nothing through the stretch and faded to last. 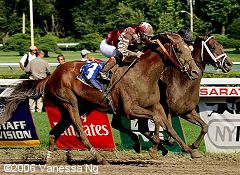 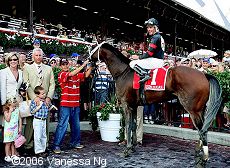 Spun Sugar in the winner's circle with trainer Todd Pletcher with his wife and two of his kids to the left. Winning trainer Todd Pletcher said, "That was a serious `bobblehead' there (Pletcher's bobblehead dolls were given away on Thursday). When I watched the replay, I knew it was super close. This filly is so game. She kind of did the same thing at Oaklawn Park when she ran against Happy Ticket (Apple Blossom on April 8). When she gets in that situation, she fights. She was never happy in her last race. I think she's a better filly around two turns and she showed what she's all about today." 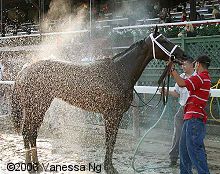 Spun Sugar gets cooled off with the hose before heading back to the barn. 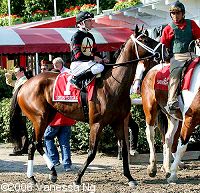 Spun Sugar in the post parade. Winning jockey Mike Luzzi said, "Todd (Pletcher) was a little concerned with the post, just because of the dirt. I knew in the first turn, she was taking the dirt. I got the chance to just sit and relax. Pool Land, I rode before, so I knew a little about her. It was like Oaklawn all over again. She's a fighter" 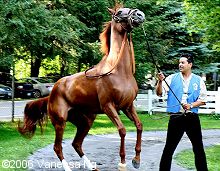 Second place finisher Balletto practices her dance moves in the paddock. Her trainer Tom Albertani said, "She came back like her old self and ran with a lot of determination. She ran her heart out. It just came down to the bob at the wire." Jockey Javier Castellano added, "It was a tough race. I didn't know if we had won, and I asked Mike (Luzzi) and he didn't know, either. It was a bob of the head. She tried real hard. Getting back to two turns really helped her today." 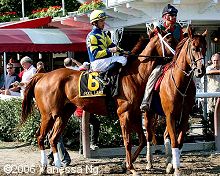 Third place finisher Pool Land gets friendly with her pony horse in the post parade. She is also trained by Todd Pletcher who said, "I thought Pool Land ran well. This was her first time at a mile and an eighth. We wanted to let her run to the first turn and see what the filly on the outside would do. The other filly seemed content to sit next to her and she never got in a situation where she could relax." 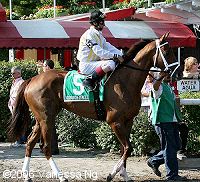 Last place finisher and beaten favorite Oonagh McCool in the post parade. Her jockey John Velazquez said, "She didn't fire at all. She went to her left lead down the backstretch. That was it." Trainer Todd Pletcher said, "(Oonagh Maccool's race) was disappointing. We'll check her over when she comes back. That wasn't her. She's a much better filly than that." Pletcher added that none of the 3 fillies he entered in this race would go in the Personal Ensign.