The $250,000 Black-Eyed Susan Stakes (G2) is the filly counterpart to the Preakness. Seven 3-year-old fillies went to the gate in this 1 1/8 mile trip over the main track, with California invader She's an Eleven sent off as the 11-10 favorite off her two race win streak, including the Melair Stakes at Hollywood Park last time out.

10-1 fifth choice Smart N Pretty assumed the lead first time past the stands, angling over to the rail to save ground around the clubhouse turn as 4-1 second choice Saratoga Drive stalked her just to her outside. The pair set a slow pace of 24.55, 48.96, and 1:13.33. At the top of the stretch, Saratoga Drive tired and dropped from contention, as 5-1 third choice Regal Engagement, who had settled in mid-pack early and wide around both turns, began her rally. Regal Engagement drew even with the pacesetter in mid-stretch but Smart N Pretty drifted out, bumping Regal Engagement before shaking her off to finish 3 1/2 lengths clear. The bumping incident drew a steward's inquiry and an objection by Regal Engagement's rider Ramon Dominguez. The stewards disqualified Smart N Pretty and placed her second, awarding the victory to Regal Engagement. It was 2 lengths back to Baghdaria in third, while favorite She's an Eleven failed to rally and finished fifth.

Also check out the results for the Pimlico Special which followed this race on the card. Farther down this page are the results of the three other stakes on the undercard. 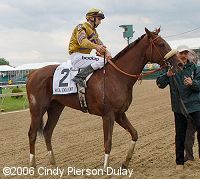 Regal Engagement returns after the race. At this point, she had not yet been moved up to the win by the DQ of Smart N Pretty. She never got to go to the winner's circle as she was already on her way back to the barn when the race was finally made official. Winning jockey Ramon Dominguez said, "She was tugging hard into the first turn, so I let her go. We had good position on the far turn and had a lot of horse coming into the stretch. Down the lane, the six horse came into me. So I had to move her out so we didn't clip heels." 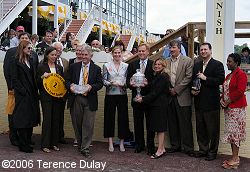 Regal Engagement's connections did get to pose for a shot with the trophies even though their horse was already gone. Winning trainer Thomas Bush said, "We'll take it. I do feel good about it, but I feel bad for the connections of the other filly. (Regal Engagement) ran terrific. We were asking a lot of her in this spot and she came through for us." 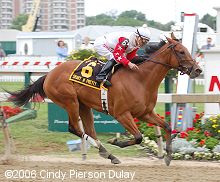 Smart N Pretty winning by 3 1/2 lengths before being moved to second for interference with Regal Engagement. Her jockey Norberto Arroyo Jr. said, "I was always aware of the horse to my outside and never thought I took the path away from the other horse. When we brushed, my horse switched leads and I thought she straightened out then. I don't think my filly should have been taken down. His horse bumped mine." 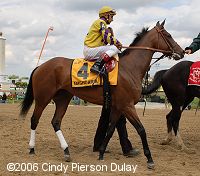 Third place finisher Baghdaria in the post parade. Her jockey Rafael Bejarano said, "I knew the pace was slow and I tried to make a move down the backstretch, but I was trapped all the way. I had to steady a couple times." 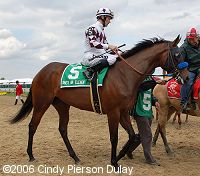 Fifth place finisher and beaten favorite She's an Eleven in the post parade. Her jockey Garrett Gomez said, "I had a gorgeous trip. I had no trouble at all. On the first turn, I moved to the outside, but she just never picked it up. She never seemed to be happy. I don't think she liked the track." 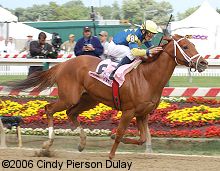 The $200,000 Allaire du Pont Breeders' Cup Distaff (G3) features older fillies and mares at 1 1/16 miles on the main track. Doubledogdare Stakes winner Pool Land was sent off as the 3-2 favorite in the field of nine, with Josh's Madelyn the 5-1 second choice.

10-1 shot Princess Pelona was quickest out of the gate and got to the rail right away to save ground on the lead, through a quarter in 23.86 and a half in 47.93. Garrett Gomez aboard favorite Pool Land stalked the pace just off the rail, settling just 2 lengths off. Down the badckstretch, Pool Land gradually closed the gap with the leader, and with 3 furlongs to go, took command and pulled away by 1 1/2 lengths in mid stretch. Pool Land easily held off the late charge of Josh's Madelyn to prevail by a length in a time of 1:42.71. It was 3 1/4 lengths back to 9-1 shot In The Gold in third. 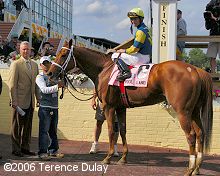 Pool Land in the winner's circle. Winning trainer Todd Pletcher said, "I thought she would rate. She has done everything right her whole life. It worked out good from an outside post. She was able to get some position in the first turn. She came away with a good rating spot down the backstretch. We thought she was capable of picking up a graded win. So today was good for everyone."

Winning jockey Garrett Gomez said, "Todd sent her over ready. My job is to put them in a good place. I did my part. The filly was there. She did everything absolutely perfect. I could not ask for more." 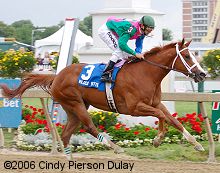 The $125,000 Miss Preakness Stakes (G3) saw seven 3-year-old fillies sprint 6 furlongs on the main track. G City Gal was the 6-5 favorite off an allowance win at Keeneland, with Wildcat Bettie B the 5-2 second choice off a third place finish in the Grade 2 Beaumont last time out.

Wildcat Bettie B stayed out wide early to take the lead right away, while being stalked by 64-1 longest shot Ardmore Prospect through a quarter in 22.82 and a half in 45.56. When that one dropped from contention at the 3/16 pole, Wildcat Bertie B shot ahead to a 3 1/2-length advantage over the onrushing 7-2 second choice Press Camp. However, Press Camp was left with too much ground to make up, as the favorite easily held her off to win by 2 lengths in a time of 1:10.05. It was a long 5-length gap to late-running favorite G City Gal in third. 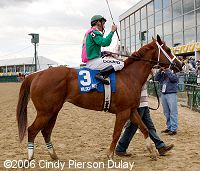 Wildcat Bettie B heads for the winner's circle. Winning trainer J. Larry Jones said, "She ran very well and Ramon rode a great race. She broke good and he went ahead and sent her on her way."

Winning jockey Ramon Dominguez said, "I really wasn't expecting to be on the lead. A couple of horses that were on the lead got shuffled. She was real game. She was comfortable on the lead and did as she pleased." 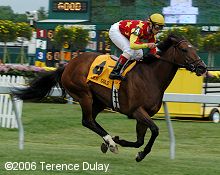 The $75,000 The Very One Stakes is a 5-furlong turf sprint for older fillies and mares. Even-money favorite Gilded Gold led every step of the way, turning away the late challenge of 4-1 third choice Bright Gold at the top of the stretch to win going away by 2 1/2 lengths, completing the distance in 57.37. Bright Gold just beat out 17-1 Kiss Me Katie at the line to take second money. 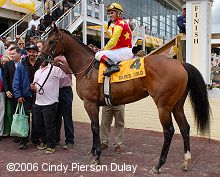 Gilded Gold in the winner's circle. Winning owner Barry Weisbord said, "Alan (trainer Goldberg) did a great job pointing the horse to the Giant's Causeway to Keeneland, and he just improved off that effort today. The horse broke beautifully. We figured she might be on the lead, although she prefers to have a target to run at. When the 13 horse came to her on the turn, we were a little concerned, but when Javier (jockey Castellano) clucked to her she had another gear and she won fairly comfortably."