Outside of Kentucky Derby week, the biggest raceday at Churchill Downs during the Spring Meet is Stephen Foster Super Saturday. A crowd of 12,056 was on hand for six graded stakes races, under sunny skies and very warm temperatures. Although the Stephen Foster Handicap is the main event, there were five other stakes worth over $1 million total. 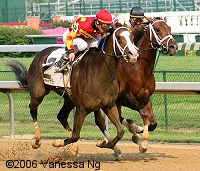 Winning jockey Julien Leparoux said, "When I asked her, it was a very good feeling. It was good that the leader (Oonagh Maccool) broke so sharp, because I could just sit and track the leader. That was good for me and my filly, too." 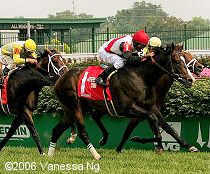 Kicking off the stakes action was the $219,200 Jefferson Cup (G2) at 1 1/8 miles on the Matt Winn Turf Course. A field of six 3-year-olds went to post in this event, with Brilliant sent off as the 9-10 favorite. Brilliant ran to expectation, stalking the pace of 7-2 second choice Tahoe Warrior and 8-1 Obi Wan Kenobi through a slow half in 49.10, and then closed well on the outside in late stretch to get up by half a length in a time of 1:48.47 over the firm going. It was just 1/2 a length more to 5-1 Storm Treasure in third, while Obi Wan Kenobi was fourth.
Full results chart from DRF 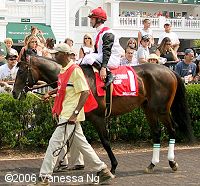 Brilliant in the paddock before the race. Winning trainer Robby Albarado said, "The best way to describe his performance is that he ran to his name, Brilliant. He does everything so well. He's such a classy horse. This horse is going to go on and do some bigger things. Hopefully, we'll see him here in the fall. I'm going to give credit where it's due and that's to Neil Howard and his team. They were really patient with him. I rode him with the utmost confidence. He's such a good horse." 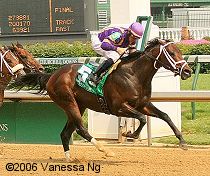 The $220,400 Northern Dancer Breeders' Cup Stakes (G3) featured a field of six 3-year-olds at 1 1/16 miles on the main track. 3-2 favorite High Cotton stalked the pacesetting 8-5 second choice Private Vow through slow fractions of 48.21 and 1:12.19, then took over the lead at the 1/16 pole and drew away under Garrett Gomez to win by 1 1/2 lengths over late-closing 5-1 Simon Pure in a time of 1:43.33. It was just a neck to 26-1 longest shot Sayhellotolarry in third, while Private Vow faded in late stretch to finish last.
Full results chart from DRF 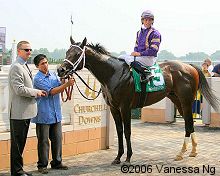 High Cotton in the winner's circle. Winning trainer Todd Pletcher said, "When he turned for home, I didn't know how much more he was going to find, but when Garrett got after him, he seemed to respond really gamely. You really had to see the start of the Arkansas Derby to really appreciate how bad of a trip he had that day. He got annihilated at the start and came back all cut up. Since then, he's put together two really good races." 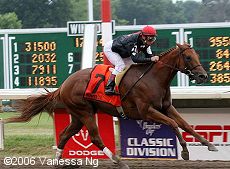 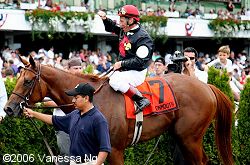 Lady of Venice in the winner's circle. Winning trainer Patrick Biancone said, "She's a lovely filly; really, really good. She won some stakes in France and we knew she was really good, and she just keeps proving it. We've taken our time with her and are going step by step. Hopefully she likes Churchill and will be back here for the Breeders' Cup." Jockey Julien Leparoux added, "When you've got a nice horse, you can go anywhere. My filly showed how good she is today, so we'll see where she goes from here. When she found her spot, no one was going to catch her." 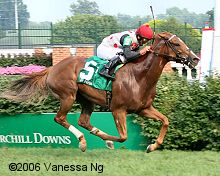 Closing out the afternoon was the $115,000 Mint Julep Handicap (G3) for older fillies and mares at 1 1/16 miles on the turf. 19-1 shot Ella Belle set an easy pace of 48.15 and 1:12.28 over the firm course. 5-2 favorite My Typhoon, who stalked the pace back in third while staying out four wide away from traffic, closed well at the top of the lane and took over inside the 70 yard pole, drawing away to win by 1 3/4 lengths over 3-1 second choice Rich in Spirit. It was just a neck back to 7-1 Louve Royale in third.
Full results chart from DRF 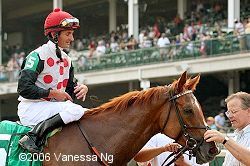 Trainer Bill Mott with jcokey Robby Albarado and My Typhoon after the race. Albarado said, "I went in with a lot of confidence. It was her second start back this year. Bill's (trainer Mott) done a great job with her to get her ready. She was a little more powerful today. She really turned it on. She finished it a lot nicer. She came back a little better this year than last year."