The Kentucky Oaks (G1) at Churchill Downs is the biggest race on Friday, but the undercard featured 5 additional stakes events, two of which are graded. A crowd of 108,065, the second largest in Oaks history, was on hand for the festivities. The record of 111,243 was set in 2005. Get the Oaks results and photos here.

The $300,000 Louisville Breeders' Cup Handicap (G2) featured older fillies and mares going 1 1/16 miles on the main track. Eight distaffers went to the post, with Irish-bred Oonagh Maccool sent off as the 8-5 favorite over 3-1 second choice Sweet Symphony. 6-1 shot Capeside Lady took over the lead from the innermost post position and set fractions of 24.25, 47.93, and 1:12.57 while 21-1 shot Private Gift stalked her for the backstretch run. The pair wore each other out, as they both faded out of contention rounding the far turn. Rafael Bejarano aboard the favorite took her out four wide on the turn after stalking the pace in fourth early on, and Oonagh Maccool found her best stride and easily powered clear at the 3/16 pole. She easily held off the late-running 7-1 shot La Reason to prevail by 3 1/4 lengths in a time of 1:42.96. Sweet Symphony was outrun the whole way and showed nothing in the stretch, finishing seventh.
Full results chart from DRF 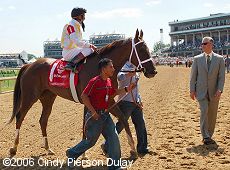 Trainer Todd Pletcher looks at his Louisville Breeders' Cup winner. He said, "She's a nice filly and both fillies ran really well. I'm very proud of both of them. She (Oonagh Maccool) acts like she's something special, she really does. She's been very, very good since we got her on the dirt. We'll run her back here on June 17 in the Fleur de Lis." 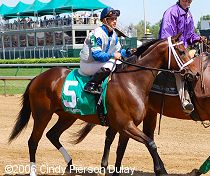 Second place finisher La Reason in the post parade. Her jockey Javier Castellano said, "She ran very, very good. She was second best today because the winner just ran away. We had a good trip. She settled good behind a fast pace, and when I asked her she finished great."

The $100,000 Crown Royal American Turf (G3) featured 3-year-olds going 1 1/16 miles on the turf. Only six entered the gate after 3 scratched. Go Between was sent off as the 7-5 favorite over 3-1 second choice Giant Basil. 10-1 shot Gaelic Storm was quickest out of the gate and he was 1 1/2 lengths clear of the field on the clubhouse turn after a quarter in 24.76. 7-2 third choice Tahoe Warrior hustled in to challenge halfway down the backstretch, getting the half in a slow 48.84. Go Between stayed right behind the pacesetters out four wide. Rounding the far turn, Edgar Prado asked the favorite to make his run and Go Between took over at the 3/16 pole and held the lead midstretch. However, 4-1 shot Stream Cat, who broke slowly and was outrun the whole way, closed strong through the stretch to just catch Go Between at the line, winning by a neck in a time of 1:42.27. It was 2 3/4 lengths back to Gaelic Storm in third, while Giant Basil was fourth.
Full results chart` 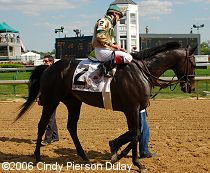 Stream Cat returns after the race. He jockey Julien Leparoux said, "Everybody wanted the lead and I just waited. When I asked my horse on the turn, he ran good for me. I know for myself that he was a very good horse because I rode him in the morning. Mr. Biancone worked hard with these horses, so it feels good to win." 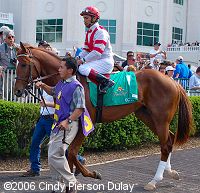 Second place finisher Go Between in the paddock before the race. His jockey Edgar Prado said, "My horse ran hard. He tried his best. Credit to the other colt. He ran a good race. We tried, but we were just second best today."

The $100,000 Alysheba Stakes featured older horses going 1 1/16 miles on the main track. A field of eight went to the gate, including two from last year's Kentucky Derby, 6-1 shot Andromeda's Hero and 9-1 Greater Good. As well, Queen's Plate winner Wild Desert was making his first start since losing the Prince of Wales Stakes at Fort Erie last year, and was sent off as 2-1 second choice. Longshots Artemus Surprise and Chippewa Trail battled on the front end for the first half-mile through quick fractions of 23.75 and 46.79, when Artemus Surprise dropped from contention. Chippewa Trail continued to hold the lead around the far turn, getting 3/4 in 1:11.59, but the fast fractions set the race up for the closers. Wild Desert, who had stalked the pace in third and out of trouble on the outside, made his move at the top of the stretch and had a short lead with a furlong to go. However, 3-2 favorite Goulding's Green, who was fifth early, was steadily closing the gap and got his head in front of Wild Desert in the final strides to get the win, completing the distance in 1:42.37 over the fast main track. It was a long 4 1/2 lengths back to late-running Andromeda's Hero in third, while Greater Good was sixth.
Full results chart 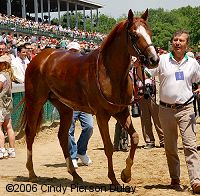 Gouldings Green leaves the winner's circle to go back to the barn. His jockey Corey Lanerie said, "I actually got by that other horse pretty easy. But my horse takes an aggressive ride and Tony (trainer Reinstedler) had warned me about that. About halfway through the stretch, I thought I may have been keeping the other horse running also, because he is so competitive, but I kept working and got to the wire first." 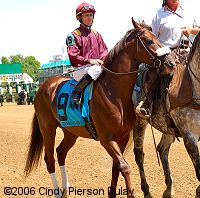 Second place finisher Wild Desert in the post parade. His jockey Rafael Bejarano said, "I might have waited too long to make my move. I was Sit, sit, sit, sitting until the quarter pole. I had a big hold on my horse. Then when I let him go the other horse had all the momentum. he was already running hard and my horse was just picking it up. He got the jump on me today."

A field of twelve older horses went to the gate in the $100,000 Aegon Turf Sprint (G3), a 5-furlong dash on the turf course. Jockey Rafael Bejarano hustled 5-1 third choice Western Kind to the lead right away and he battled with 28-1 outsider Lion And The Lamb through a first quarter of 24.90 and a half in 44.75 before the longshot faded from contention. Western Kind continued to hold the lead in mid-stretch, but 5-2 favorite Man of Illusion was closing well from fifth early, while 39-1 longest shot Justice of Auston, who had stalked the pace in third, was also making a late move. In the final sixteenth, Man of Illusion wore down Justice for Auston to prevail by just a neck, in a time of 56.28 for the 5 furlongs on firm turf. It was just 3/4 length back to 7-2 second choice Atticus Kristy in third, while Western Kind faded to fifth.
Full results chart 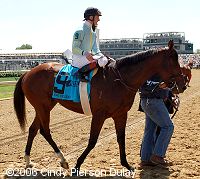 Man of Illusion heads for the winner's circle after the race. His trainer Patrick Biancone said, "I think the horse was much sharper today. The last time, he had not run for a long time, and we didn't know much about him. He was a bit surprised to have a handler in the gate. The don't have that over there (Australia). But he was not as shart as today." 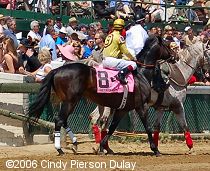 Second place finisher Justice for Auston in the post parade. His trainer Dale Romans said, "He ran as hard as he could. I couldn't see anything we'd have done diferent, just hang on the last jump. But he ran hard. He always runs good on this track."

Kicking off the stakes action on Oaks day was the $100,000 Edgewood for 3-year-old fillies going 1 1/16 miles over the turf course. A field of nine went to post with Kitty Hawk sent off as the lukewarm 2-1 favorite over 4-1 second choice May Night. 7-1 shot Beau Dare took the lead right away and led the field through fractions of 23.81, 47.91, and 1:11.88 while as many as 2 lengths clear of 9-1 shot Fiery Dancer in second. Turning for home, Beau Dare tired and dropped from contention as Beau Dare inherited the lead with a furlong to go. However, 6-1 shot Magnificent Song, who had raced in mid-pack down the backstretch, went five-wide around the far turn and wore down Fiery Dancer in the final 1/16 to prevail by just 1/2 a length in a time of 1:42.15 It was 3/4 length back to May Night in third, who just nosed out favored Kitty Hawk in fourth. The race was trainer Todd Pletcher's third on the card.
Full results chart 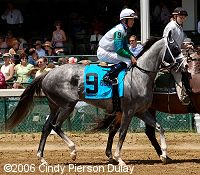 Magnificent Song in the post parade. Her jockey Garrett Gomez said, "The pace wasn't too rapid, so I just had to cover her up and find a spot to run in. This was my fist time on her and Todd gave me great information. The gate opened and we just took it from there. It just took her a little while to get in gear. It took me about an eighth of a mile to get her going, but she finally got going and it was enough." 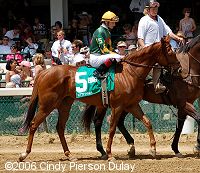 Second place finisher Fiery Dancer in the post parade. Her jockey Javier Castellano said, "I thought I'd win it around the quarter pole, that's where she really took off. I have to give a lot of credit to the winner, but my filly did finish very strong."