The $500,000 Jim Dandy Stakes (G2) at Saratoga is the major local prep for the $1 million Travers Stakes. Only 6 three-year-old colts went to the starting gate in this 1 1/8 mile event, with just five betting interests due to the common ownership of 4-1 third choices Dr. Pleasure and Minister's Bid, owned by John Oxley and trained by John Ward Jr. Preakness winner Bernardini was making his first start since that win at Pimlico, and he was sent off as the 3-5 favorite with Belmont Stakes third place finisher Sunriver the 3-1 second choice.

Bernardini took the lead right out of the gate, and under the careful handling of jockey Javier Castellano, set an easy pace of 23.89, 47.36, and 1:11.33 down the backstretch well off the rail while a length ahead of Minister's Bid and Sunriver. At the top of the stretch, Castellano asked Bernardini for his best and got it, as the favorite surged ahead to a 7-length lead with a furlong to go. The favorite drew away to a 9-length victory over Minister's Bid in a time of 1:50.50 for the 9-furlong trip over the sloppy, sealed main track. Minister's Bid was just a head in front of late-running 24-1 longest shot Hemingway's Key in third. Dr. Pleasure was fourth while Sunriver stalked the pace in third early, but faded in the stretch to finish last. 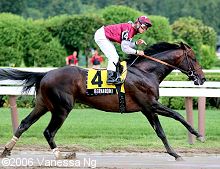 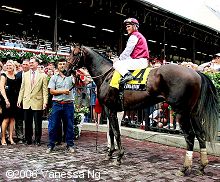 Bernardini in the winner's circle. His trainer Tom Albertrani said, "I was very pleased with his race today. He ran pretty much how I was hoping. He ran pretty easily and came back with something left. My concern was the track. I was worried all day how he would handle the sloppy track. He handled it with no problem and did it very easily today. He showed today what a really good horse he is. I wasn't surprised. I've been saying all along how good this horse is. I think we are going to see better things from this horse later on. I don't think we are going to be fearing anyone in the Travers. If he stays at this level, he is going to be a very tough horse all year." 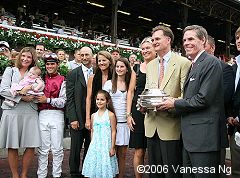 The trophy presentation with (left to right) jockey Javier Castellano with his wife and baby, trainer Tom Albertrani with his wife and two daughters, and Darley bloodstock manager John Ferguson (light jacket). 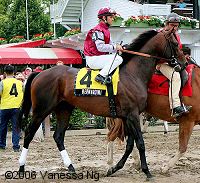 Bernardini in the post parade. Winning jockey Javier Castellano said, "He did it so easily. I have a lot of confidence in this horse. Looking at his workout and the way he looked in the paddock, I knew he was ready. I was worried about saving him for the Travers. I didn't want to beat him up. At the top of the stretch, I could hear everyone trying to come after me. I decided to wait as long as I could. It was just perfect. He is such a classy horse. He felt just like he did in the Preakness. After the race, he was so calm and he wasn't blowing." 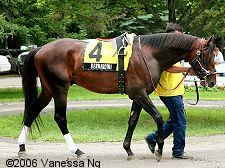 Bernardini in the paddock before the race. Sunday morning trainer Tom Albertrani said, "I think it was more impressive than when he ran in the Preakness. It was basically a public workout. He came out of it great. He came back as if he didn't even run. I wasn't expecting to see that type of performance, especially with the track being sloppy. I wasn't sure what to expect. Most A.P. Indy's handle an off track, but you never know until they run over it. I think this performance removed all doubt and convinced a lot of the non-believers. He's a special horse." 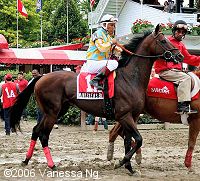 Second place finisher Minister's Bid in the post parade. John Ward, trainer of both Minister's Bid and fourth-place finisher Dr. Pleasure said, "We really liked Bernardini coming down the lane. He was balanced and his ears were pricked. My two horses were like fifth-graders in the detention barn or the study hall. They were not focused, and they have to get better with that. Dr. Pleasure ran a tactical race with a good move, he just didn't have the finish. That will come with development. It's too early to see if these two horses are considered for the Travers." His jockey Edgar Prado added, "You really can't take anything away from Bernardini. He got out there and we tried to stay with him through the far turn. But he just kept pulling away." 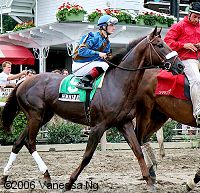 Third place finisher Hemingway's Key in the post parade. His trainer Nick Zito reported Sunday that he returned in good order and is likely to run back in the Travers. Zito said, "Bernardini was obviously sensational and it was great to see a horse like that for the game. If he has an off day, we're going to try him again." 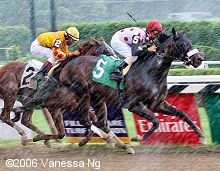 Hesanoldsalt winning the 3rd race, a 1 1/8 mile allowance for 3-year-olds and up, in the driving rain. He is also trained by Nick Zito who said he came back fine from the race and will go in the Travers along with Hemingway's Key next out. Also in this race was the nighly regarded Corinthian who finished third.