Despite not having the Derby or Preakness winner in the field, a decent crowd of 61,168 came out to Belmont Park on a windy Saturday afternoon for the 138th running of the $1 million Belmont Stakes (G1). Kentucky Derby winner Barbaro was injured in the Preakness, while Preakness winner Bernardini's connections opted to skip the race citing distance concerns. With those two out, twelve others went to the post in one of the most contentious Belmonts in recent history. The favorite and Wood Memorial winner Bob and John went off at odds of just over 9-2, with Bluegrass Cat and Steppenwolfer, the 2nd and 3rd place finishers in the Derby respectively, sent off at just short of 5-1 each. Surprisingly, only two horses came out of the Preakness: 15-1 Hemingway's Key and 38-1 Platinum Couple.

When the gate opened, 12-1 shot Oh So Awesome lunged in the air and was slowest to get into stride, while favorite Bob and John was rushed up to the front by jockey Garrett Gomez to set the pace. Bob and John stayed well off the rail away from trouble through a quick initial quarter of 23.02, then Gomez worked to slow the pace to 47.36 for the half and 1:12.14 for six furlongs, while 10-1 shot High Finance stalked the pace along the rail and 12-1 Deputy Glitters challenged out in the six path. Entering the far turn, Bob and John was showing fatigue after a mile in a very slow 1:37.53, dropping back through the turn and the stretch to finish eighth. 6.20-1 shot Jazil, who was unhurried at the back of the pack most of the way around after a poor start, was just hitting his best stride. At the top of the stretch, Jazil got the jump on Bluegrass Cat, and powered away through the final furlong to win by 1 1/4 lengths in a time of 2:27.86 over the fast main track. It was 2 1/4 lengths back to 6-1 Sunriver in third with Steppenwolfer closing for fourth. 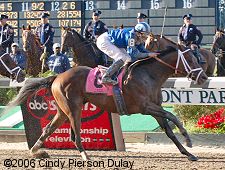 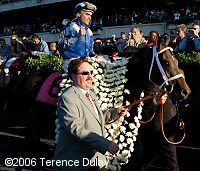 Jazil takes his walk down Victory Lane with trainer Kiaran McLaughlin leading. McLaughlin said, "He was moving easily. When he came next to Bluegrass Cat, it didn't look like anyone else was gaining quickly. I was happy to be there. That's what everybody talks about, deep closers can't win, so we had to be there with 3/8 left to go close. I thought we were going for the Triple Crown, the OTB Triple Crown: eight, eight and eight. Eight won every leg of the Triple Crown." 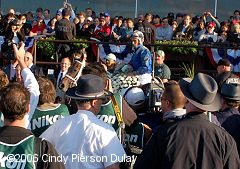 It was a mob scene in the winner's circle so I couldn't get anything better than this shot. Winning jockey Fernando Jara said, "The trainer and the owner believed in me. I thought I had the race won after a mile. I lost one of my irons leaving the gate, but it was no problem. I moved at the right time. It's amazing. I got clear, he got way and we win." 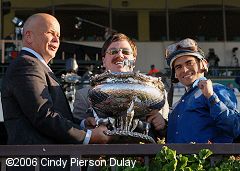 Rick Nichols, the vice president of Shadwell US, trainer Kiaran McLaughlin, and jockey Fernando Jara with the Belmont Trophy. Nichols said, "It's a great pedigree, especially for us, since we do a lot of running in Europe. He has some distance in his pedigree. That whole Raise a Native line has been a great line in our breeding program. You'll see him in our stallion barn in Shadwell in Lexington some day. Hopefully, won't be this year. Whenever he gets around to it. He'll be smiling like we are." 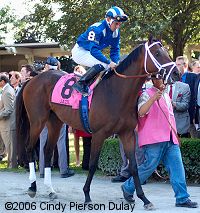 Jazil in the paddock before the race. When asked if they had considered taking Jara off Jazil for the Belmont, Rick Nichols said, "The way he rode him in the Wood, he fits the horse so well. The horse responds to him so well. Sheikh Hamdan believes when somebody is doing a good job, you don't try to fix it. We did discuss it with Sheikh Hamdan. He said, absolutely, he's the man to ride him. He's done a good job so far. Keep going." 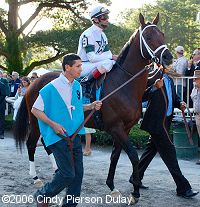 Second place finisher Bluegrass Cat heads out to the track before the race. His jockey John Velazquez said, "It cost me so much going so wide around the first turn. I was right on the other horse's heels, where I couldn't get him inside. I had two horses to think about - Jazil and Steppenwolfer. On the second turn, I dropped in and thought that when the other horses started coming to me, I would go. Jazil came to me much quicker than I thought he would. I was at the 3/8 pole and he was head and head with me. I got after him little by little. He fought the whole way and ran a huge race." 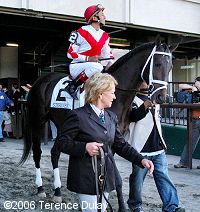 Third place finisher Sunriver heads out of the tunnel for the track before the race. His trainer Todd Pletcher said, "Sunriver had a good trip. He dug in and tried hard. He ran a big race. Fractions were about where I thought they would be. I know sometimes, the strategy on the first turn is to stay out in the middle of the track, but basically, every race has been won on the rail all day. So, it was kind of a strange tactic. If it were anyone besides me, I was rooting for Kiaran. He is one of my best friends, a great person, and I am very, very happy for him." 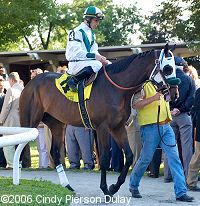 Eighth place finisher and beaten favorite Bob and John before the race. His trainer Bob Baffert said, "I thought my best chance was to steal the race. I didn't think anyone would want the lead. But that didn't work out. No one was going to let me do that. I told Garrett (Gomez) to let the horse gallop and get into his groove. Garrett said he felt like he was walking the dog. But I think that strong headwind took a lot out of him going down the backstretch. I also thought the race was too far for him. He still is an immature horse and needs more time to develop." 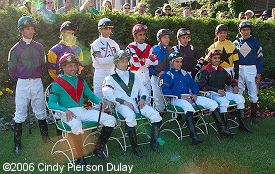 The Belmont jockeys pose for their traditional class photo before the race.

The Belmont field kicks up some dust at the start of the race.