The feature race on the opening Friday of the 2006 Saratoga meet was the $112,900 Lake George Stakes (G3). A field of eight 3-year-old fillies went to the gate in this 1 1/16 mile trip around the inner turf course which was rated yeilding due to heavy rains. Patrick Biancone trainee Pyramid Love was sent off as the 5-2 favorite, making her first American start after making her first three career starts in France. Also in the field were 3-1 second choice Quite a Bride, winner of the Boiling Springs at Monmouth in her last start, and 7-2 third choice Magnificent Song, winner of the Edgewood and 2nd in the Regret, both at Churchill Downs.

5-1 fourth choice Somethinboutbetty went to the front right away and was 1 1/2 lengths ahead of the field through fractions of 24.27, 49.70, and 1:14.58 over the yielding course, with Quite a Bride settling in behind her in second the whole way. In mid stretch, Somethinboutbetty was 2 1/2 lengths clear of the field and looked to be home free, but Magnificent Song, who had raced at the back of the pack most of the way on a ground-saving trip along the hedge, was gaining with every stride. In the final strides, Magnificent Song wore down the pacesetter to prevail by 3/4 length in a time of 1:45.88. It was 1 1/4 lengths back to Quite a Bride in third. Favorite Pyramid Love was slowest out of the gate, raced near the rear most of the way, and had no rally at the end finishing sixth. 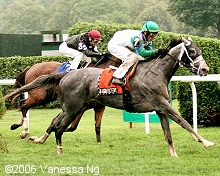 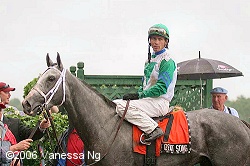 Magnificent Song in the winner's circle. Winning jockey Garrett Gomez said, "I had a great trip. I slid up the fence and actually hit my heels on the hedge a few times. In the past, she was real timid, but Todd has done a great job in getting her to relax. I thought the give in the ground would move her up a bit, and it definitely did." 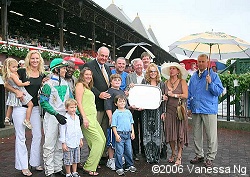 All the happy connections with the trophy. Trainer Todd Pletcher is on the right and Garret Gomez with his wife and two children are on the left. Pletcher said, "It seemed to make a difference putting blinkers on Magnificent Song. It was Johnny's (Velazquez, aboard Somethinboutbetty) recommendation that we do it back at Gulfstream. Maybe he was wishing he didn't say that at the 1/16 pole. We just let Magnificent Song settle. We didn't think she would be that far back, but she came with that big run late." Pletcher said Magnificent Song will likely go next in the Lake Placid on August 18. 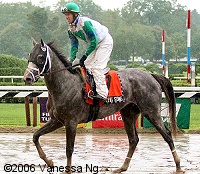 Magnificent Song returns after the race on the soggy main track. 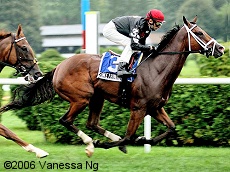 Second place finisher Somethinboutbetty leads as they go by for the first time. She was also trained by Todd Pletcher who said, "We've gotten off to a good start, as we had hoped. We chased Quite a Bride a few times in previous races. Magnificent Song and Somethinboutbetty make good entrymates; they keep an honest pace. I thought Somethinboutbetty ran a huge race; I thought she would run better on firmer ground. She handled the soft course well. She ran a winning race and never stopped trying." 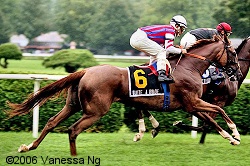 Third place finisher Quite a Bride goes by in second as they pass the stands for the first time. 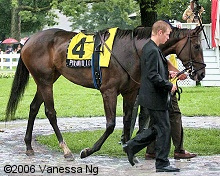 Sixth place finisher and beaten favorite Pyramid Love in the paddock before the race. Her trainer Patrick Biancone said, "She hadn't run in a long time. Julien (Leparoux, jockey) said the track was testing, she just got tired. That's all right, we needed to get a race into her."