The $600,000 Flower Bowl Invitational (G1) on Super Saturday at Belmont Park is a 1 1/4 mile trip over the inner turf course for older fillies and mares, a furlong shorter than the Breeders' Cup Filly and Mare Turf at Churchill Downs in four week's time. A compact field of five made the gate here, with Beverly D runner-up Film Maker sent off as the 3-2 favorite over 2-1 Honey Ryder, winner of the Orchid, the Sheepshead Bay, and the R.G. Dick for trainer Todd Pletcher, but comes off a disappointing fourth place finish in the Beverly D last out. 5-2 third choice Argentina was third in the Diana last time out for trainer Bobby Frankel.

17-1 longest shot Jade Queen made all the running early, setting slow fractions of 24.95, 50.36, 1:14.86, and 1:39.08 while as many as 1 1/2 lengths clear of Argentina who settled in second. The favored Film Maker and second choice Honey Ryder settled comfortably in third and fourth close together the whole way. Entering the stretch, the pair made their runs at the leader and a three-horse battle was set. After a protracted stretch battle, Honey Ryder got her nose down first to get the win in a time of 2:02.47 over Film Maker, who was just 1/2 a length in front of the pacesetting Jade Queen in third. Argentina tired at the end and finished last.

Check out the other races on the card: Jockey Club Gold Cup, The Beldame, Joe Hirsch Turf Classic Invitational, and The Vosburgh. 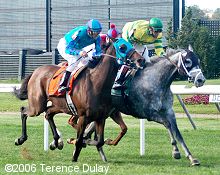 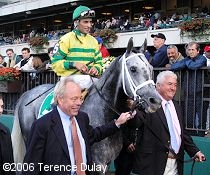 Two of the Greathouse brothers lead Honey Ryder down Victory Lane after the Flower Bowl. Winning jockey John Velazquez said, "It was not easy for her to do what she did. She got squeezed between horses and kept running. While the other horses had a clean trip coming to the quarter-pole, I had to squeeze my way out. I tried to do what was best for the horse by saving ground and waiting for our time. Luckily it worked out well, she put up a good fight." 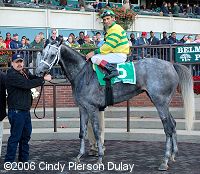 Honey Ryder in the winner's circle. Winning trainer Todd Pletcher said, "It was my fault that she didn't run better in her last race. Today I told Johnny not to get too far out of it because it was a paceless race on paper. He was where I told him I wanted her to be, which diminished her late kick a little. We were focused on getting her covered up today, regardless of what the pace was. She basically has one, small blemish on her record and, like I said, that was my fault. She's been awfully good all year." 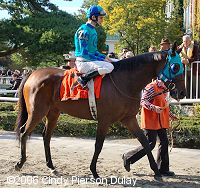 Second place finisher Film Maker leaves the paddock for the track before the race. Her trainer Graham Motion said, "She ran great. It's hard to be disappointed when they run like that. She just needs the race to be a little longer, like a mile and a half. She gets run off her feet a little in these shorter races. Hopefully, we can go back to the Breeders' Cup again and improve on her second and third there." Jockey Ramon Dominguez added, "We were very conscious of the slow pace that might develop. She broke running and I was happy. She laid closer today, but that didn't take anything out of her. I always have to get into her at the 3/8 pole, and then at the 1/4 pole, she kicks in. She tries so hard every time." 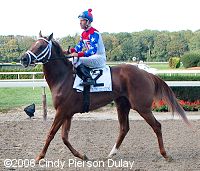 Third place finisher Jade Queen returns after the race. Her jockey Mike Luzzi said, "She was the speed in this race. Pretty much, we were allowed to go to the lead. We tried to steal it, and we almost did. She ran an unbelievable race." Trainer Todd Pletcher added, "Jade Queen ran huge. That's what we were hoping to do, take advantage of a slow pace. She ran a huge race for a 3-year-old filly running against the lineup that was in there today."