The Distaff division was represented on Super Saturday at Belmont Park in the $600,000 Beldame Stakes (G1) for older fillies and mares at 1 1/8 miles. Fleet Indian was the deserving 9-10 favorite off her seven straight victories including the Personal Ensign and the Delaware Handicap. In to challenge her were Personal Ensign runner-up Balletto, the 3-1 second choice, and 4-1 Round Pond, second in the Molly Pitcher last time out.

A three-horse battle ensued in front as 11-1 Take D'Tour, 10-1 Teammate, and Round Pond battled through a quick pace of 23.92, 46.39, and 1:10.36, while jockey Jose Santos got the heavy favorite Fleet Indian to settle just off the pace in fourth. Around the turn. Fleet Indian came out four wide to make her run at the leaders, with Balletto following her as well. As Take D'Tour faded from contention after the fast pace, Round Pond took over the lead on the turn, but this was short-lived as Fleet Indian ran by her and was 2 lengths clear with a furlong to go. Balletto put in a strong late rally but Fleet Indian dug in late to hold her off by just a head in 1:48.69. It was a long 7 lengths back to Round Pond in third. 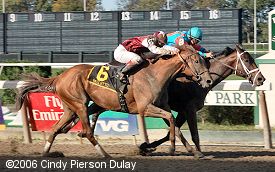 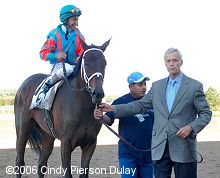 Owner Paul Saylor leads Fleet Indian toward Victory Lane. Winning jockey Jose Santos said, "I looked in the Racing Form and saw a lot of speed. My filly has such a long stride and she wants to be close to the pace. She didn't break that well today because she lunged leaving the gate. But by the quarter-pole, I was in good shape. It looked like Balletto was going to go by her, but we could go once more around and I don't think she was going to go by her. The way the race was shaping up, it was a lot better for a closer like Balletto, but I will say that this filly (Fleet Indian) will overpower this group. Even though she is a New York-bred, she's got the heart of a lion." 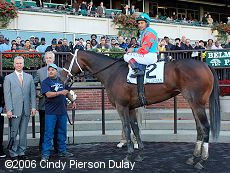 Fleet Indian in the winner's circle with trainer Todd Pletcher on the far left. Pletcher said, "She has been so dominant. What we were hoping to find out today, which will help us in the Breeders' Cup, is that she can sit off horses and dig in. She showed that today. We figured she wasn't going to get beyond the lead. She seems to adapt to it real well. She sat behind those horses and took dirt. It looked like she might be getting late when that other filly (Balletto) was getting to her, but she dug back in and galloped out strong." When asked about breaking his own single-season earnings record with the win, he added, "It's great that we were able to do it in a big race. It has been a great year." 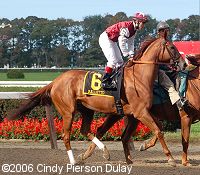 Second place finisher Balletto in the post parade. Her trainer Tom Albertrani, said, "It was another good effort from her. It was another close race for her. Fleet Indian just dug in again once Balletto got close to her. We're still going to head to the Breeders' Cup Distaff, if she comes out of it well." Jockey Javier Castellano added, "The race set up perfect for her, because she runs from behind. She gave me everything she had today. I think the winner picked it up a little when she saw me coming. She took off a little more, which cost me the race. There's nothing you can do, my filly gave a good effort and ran her race today." 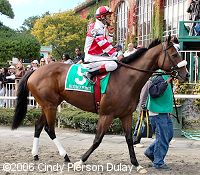 Third place finisher Round Pond in the paddock before the race. Her trainer Michael Matz said, "I didn't think we would be up there that close. She had a little bruise and we missed a work with her. I was happy; it was only her second start back. She should move forward next time out. She will get a lot out of this race." Jockey Edgar Prado added, "I didn't really want to be that close, but she kind of brought me up there. It definitely wasn't by choice. She ran hard, but just got a little tired at the end." that response or kick."