The $600,000 Joe Hirsch Turf Classic Invitational (G2) during Belmont Park's Super Saturday is a major prep for the Breeders' Cup Turf and is contested over the Widener turf course at the same distance of 1 1/2 miles. Seven were entered with only six betting interests, as the James Scatuorchio-owned entry of Icy Atlantic and English Channel were sent off as the 3-5 co-favorites for trainer Todd Pletcher. English Channel won the Woodford Reserve Turf Classic and the United Nations Handicap this year, while stablemate Icy Atlantic only has 1 win this year so far, obviously entered as a "rabbit". Four-year-old filly Fredonia was the 3-1 third choice, shipping in from Europe off a 4th in the Prix Vermeille at Longchamp. Another European, 6-1 Frost Giant, rounded out the top three betting interests on the board.

As expected, jockey Mike Luzzi and Icy Atlantic went to the front right away, and with 13-1 Dreadnaught and third choice Frost Giant stalking in behind, set a pace of 25.51, 51.37, 1:16.35, 1:39.92, and 2:03.93 over the firm course. English Channel raced in fourth early, relaxed out of traffic trouble in the four path. Entering the stretch, Icy Atlantic tired and dropped to last place, while English Channel was hitting his best stride and gaining fast. Running by the tiring pace, he took a 3 1/2 length lead with a furlong to go, and easily pulled away to a 4 1/2 length win over the late-closing Fredonia in a time of 2:28.69. The other European filly, 10-1 Royal Highness, put in a late run of her own but was left with too much to do, finishing a neck behind Fredonia in third. 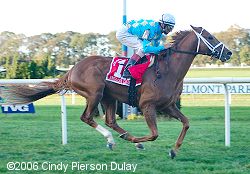 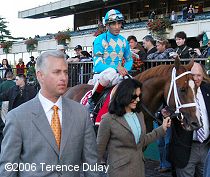 Trainer Todd Pletcher leads the way as English Channel takes his walk down Victory Lane. Pletcher said, "This was a dominating performance from English Channel. He settled beautifully and really responded. These are the important races. These are the days that you want to do well. This horse has a heavy argument for being champion turf horse. His record stacks up with anyone's in the division." Asked about his record-breaking season in wins, stakes wins, and earnings, he added, "We were in good position with horses that had been training well today. Now, you have to hope you can keep them in good form and reproduce the same effort four weeks from now. To me, the hardest two records are (D. Wayne Lukas') 92 stakes wins (in 1987) and (Bobby) Frankel's 25 Grade 1 wins (in 2003). Those are the ones that mean the most to the horses' value. We've had an incredible run." 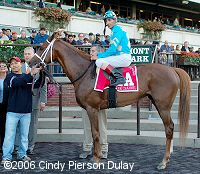 English Channel in the winner's circle. Winning jockey John Velazquez said, "He made it look a little more difficult than it was, but he went on and looked really good. There was just no pace in there. I was hoping (Icy Atlantic) would open up on them for me. I didn't want to get too close to him. From the quarter-pole home, it was real easy. It was a much better trip than last time at Arlington; he was just a little rank that day. He proved today that he can get 12 furlongs." 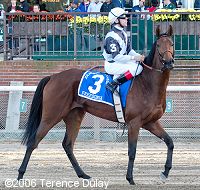 Second place finisher Freedonia checks out the photographers during the post parade. Her jockey Thierry Gillet said, "She was in good position. She ran well around the track. She was good enough for second." 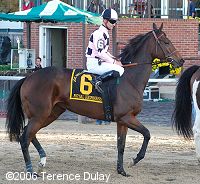 Third place finisher Royal Highness in the post parade. Her jockey Thierry Thulliez said, "My filly ran well. I could not catch the horse who won. I had a bit of a tough trip, but I was happy to be second."