Belmont Park's Super Saturday features five Grade 1 events, each a key prep for a corresponding Breeders' Cup race which is four weeks away. Only 16,959 were on hand for "Super Saturday", a figure inflated by the stadium blanket giveaway, to view some of the smallest fields in these races in recent memory. Three of the races were contested over the main track, with the $750,000 Jockey Club Gold Cup (G1) the premier race of the meet and a major prep for the Breeders' Cup Classic. However, just four showed up in this 1 1/4 mile feature, with many other contenders scared away by the presence of 1-10 favorite Bernardini, winner of the Withers, Preakness, Jim Dandy, and Travers Stakes so far this year. 9-2 second choice Dylan Thomas was making his first start on dirt having shipped over from Ireland, having won the Irish Derby and the Irish Champion Stakes so far during his 3-year-old campaign. The Nick Zito-trained pair of 9-1 Wanderin Boy and 18-1 Andromeda's Hero are the two older horses in the field and the two longest shots on the board.

Wanderin Boy set a pace of 25.03, 48.13, 1:11.81, and 1:35.86 while Bernardini sat just a length behind in perfect stalking position to his outside. Andromeda's Hero was 5 1/2 lengths back of the lead pair while Dylan Thomas was as many as 8 lengths behind him for the backstretch run. Turning for home, there was little doubt of the result as Bernardini easily collared Wanderin Boy at the 3/16 pole and under very little urging by jockey Javier Castellano, pulled away to win by 6 3/4 lengths in 2:01.02 over the "fast" main track. It was 6 more lengths back from Wanderin Boy to Andromeda's Hero in third, and 19 1/2 more to the tired Dylan Thomas in last, who clearly did not handle the dirt. 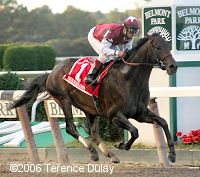 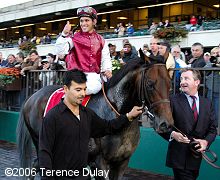 Jockey Javier Castellano gives the thumbs-up as Bernardini takes his walk down Victory Lane. Castellano said, "I had so much horse today. I never asked him. It looked pretty easy. I liked the way he did it today. He settled down perfectly behind the speed horse. I wanted him to settle down today. I didn't want him on the lead because I want him to be focused for his next race, the Breeders' Cup. In the Breeders' Cup, someone may want to go for the lead. There is more pressure and more pace in that kind of a race. He's a special horse, and that kind of a horse is hard to find. He's my spoiled baby." 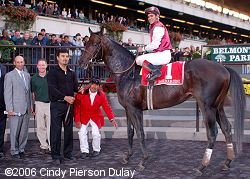 Bernardini in the winner's circle with trainer Tom Albertrani on the far left. Albertrani said, "That was exactly what I was hoping for. I was hoping to see him run as easy as he did in the Jim Dandy. I've got a fresh horse for the Breeders' Cup now. He does things so easily, I don't know if anyone can give him the kind of race where he was to fight. Look at the hold Javier had on him. It looked like Javier could take the lead at any time. It worked out very, very well. He'll probably stay here until a few days before the race. I think it will come down to Lava Man, Invasor and us for Horse of the Year. We'll train as we always have and look forward to the next one. He showed up like he always does today." 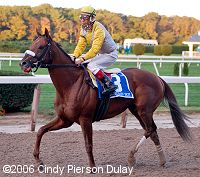 Second place finisher Wanderin Boy returns after the race. His jockey Edgar Prado said, "I tried to slow it down. My horse runs best on the lead. I tried to let him get away, but (Bernardini) had me any time. I was running at the end. My horse didn't quit at all. When he came to me, I just wanted to hold on for second." Trainer Nick Zito was gracious in defeat, saying "It was a good day for me. I'm really happy about our horses, no question. This horse (Bernardini) has superstar credentials. If he wins the Breeders' Cup, he'll certainly solidify that. It's the first time I almost clapped for a horse that beat me. That was pretty cool. That was a tremendous horse. Javy (Castellano) rode him with tremendous confidence. He'll be getting a lot of accolades now. He doesn't need me." 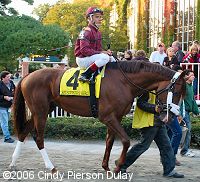 Third place finisher Andromeda's Hero in the paddock before the race. His jockey Cornelio Velasquez said, "My horse ran okay today, but that Bernardini is a great horse. I was hoping for more pace in there. My horse just doesn't have any speed to keep up, but he ran okay." 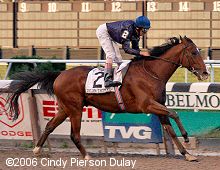 Badly beaten last place finisher Dylan Thomas crosses the finish line some 32 lengths behind Bernardini, proving he doesn't care one bit for racing on dirt. Will they now decide to send him to the Breeders' Cup Turf instead of the Classic? 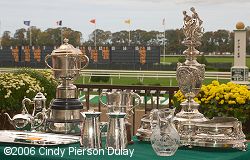 The table of trophies waiting for the winners earlier in the day.