The richest race in Canada is the $2 million Pattison Canadian International (G1). A field of twelve older horses from North America and Europe contested the 1 1/2 miles of Woodbine's E.P. Taylor Turf Course on Sunday afternoon. English colt Ask was sent off as the lukewarm 5-2 favorite coming into the race off two straight stakes wins in the Ormonde (G3) at Chester and then the Cumberland Lodge (G2) at Ascot. German entrant Quijano was the 4-1 second choice on the board, also coming to Woodbine off a two-race win streak, including the Ittlingen-Pokal at Cologne and the Grosser Preis von Baden (G1) at Baden-Baden. Top local hope Sky Conqueror was the 5-1 third choice, winner of the Woodford Reserve Turf Classic (G1) at Churchill Downs as well as the Northern Dancer Breeders' Cup Turf (G2) at home. The top American entrant on the board was Todd Pletcher trainee Sunriver, winner of the Bowling Green (G2) at Belmont Park in July, followed by a fourth in the Arlington Million (G1) and a close second in the Man O'War (G1). Conditions were ideal for racing, with unseasonably warm temperatures in the high 70's and the turf course very firm despite rains earlier in the week.

Jockey Emma-Jayne Wilson took the 45-1 longest shot Marsh Side to the front right after the start, and opened up a 1 1/2 length lead on the clubhouse turn getting the initial quarter in 25.18. Entering the backstretch Sunriver moved alongside Marsh Side to stalk the pacesetter, and the pair got easy fractions of 50.89, 1:15.60, and 1:40.02 with 34-1 Linda's Lad and 18-1 Cloudy's Knight staying close. Favorite Ask was unhurried under jockey Ryan Moore after breaking slowly, setting back in ninth. Entering the stretch, Marsh Side faded from contention as Sunriver inherited the lead at the 1/4 pole, getting 1 1/4 miles in a slow 2:04.36, but the race had set up for the closers. Jockey Ramsey Zimmerman aboard Cloudy's Knight came out three wide on the turn to pass the tiring Marsh Side and then ducked him to the inside for firmer ground for the rally. Moore aboard Ask came out four wide into the lane and was closing with every stride. Cloudy's Knight opened up a 1 length lead with a furlong to go, and was all out late to hold off the late charge of Ask by a nose in a final time of 2:27.71 over the firm course. It was just a length back to late-running Quijano in third. 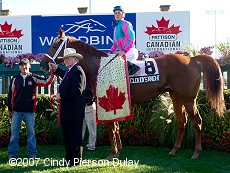 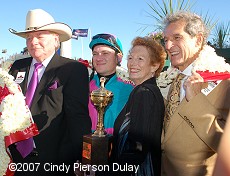 Left: Cloudy's Knight in the winner's circle. His trainer Frank Kirby said, "What a great race he ran. Great race the jockey rode. He fits this horse like a glove. Most people pull on him and this kid throws the reigns away, kind of. I would like to thank the Schwartz’s for letting me train this good horse. These owners have great patience for all their horses, he had a little thing on the back of his ankle. We were going to bring him back earlier, but we ran out of time, we just decided to give him more time. It was the right thing when we brought him back, he really got good. Of course our plans are to run him again next year, this will possibly be his last race this year. We are planning a big campaign for him, if everything is good." 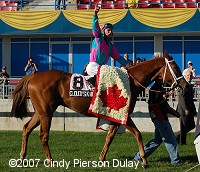 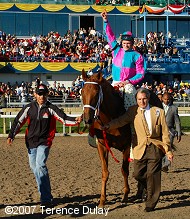 Cloudy's Knight parades after the races. His jockey Ramsey Zimmerman said, "He has a lot of guts. He has never not tried for me. It just set up perfectly. He broke exactly how I would have wanted him to. He was able to just relax off those speed horses. If you get in his mouth, he might want to go fast, so I just threw the reins at him, he was perfect right where he was. I was able to bide my time, I took a look over my shoulder to see if anybody was challenging from the outside, but nobody was. With the wind, I couldn't hear anything and usually when it goes silent that means you're well in front. He took a couple of steps in real late, then here's this horse (Ask). I put my head down and drove as hard as I could for the last couple of strides. I actually thought he had got me because when I stood up he was in front, which is not a good sign. Just a brilliant performance by Cloudy’s Knight. I am so grateful to be here at Woodbine in Canada today and part of this big day representing America. And thanks to Frank Kirby for doing a great job." 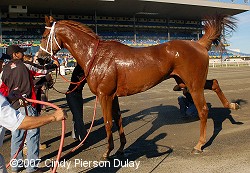 Cloudy's Knight kicks up his heels as he gets hosed down after the race. It was an unusually hot day in Toronto for late October, quite sunny and warm. 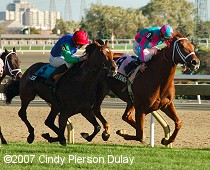 Cloudy's Knight and second place finisher and beaten favorite Ask duel down the stretch. Ask's jockey Ryan Moore said, "We could've gone with a bit faster pace. The ground was too quick for him." 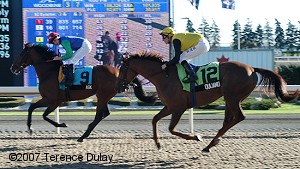 Second place finisher Ask and third place finisher Quijano run off together after the post parade. Quijano's jockey Andrasch Starke said, "He ran a good race. I left some good horses behind me. And to finish third in a race like this is terrific. He was not beaten that far."