The $2 million Canadian International (G1) at Woodbine is the richest stakes race in Canada and the last Grade 1 event in the country. The race has seen some greats win including Singspiel, All Along, Dahlia, Electrocutionist, Chief Bearhart, Sky Classic, and of course Secretariat winning his final race. A steady rain that began overnight and continued until race time rendered the course soft, with temperatures in the low 50's.

In this year's edition, a field of ten older turf specialists went to the gate in this 1 1/2 mile trip, one lap of the E.P. Taylor Turf Course. The 5-2 favorite was 5-year-old mare Kastoria, shipping in from Ireland for owner The Aga Khan and trainer John Oxx, trying to become the sixth distaffer to win since the race moved to turf in 1958. She has faced males exclusively this year, and came into the International off a 3-race winning streak including the Curragh Cup and the Irish St. Leger. Todd Pletcher trains the New York-based 7-2 second choice Go Deputy, who has finished in the money in all 8 of his starts this year, including wins in the Sword Dancer and the Bowling Green. Last year's winner Relaxed Gesture was back to defend his title and was sent off as the 5-1 third choice. However, he has not won since that start, with his best race being a close second in the Manhattan in June.

31-1 outsider and local hope Last Answer was loose on the lead around the clubhouse turn and down the backstretch, setting slow fractions of 26.86, 52.95, 1:19.06, and 1:45.93 over the rain-soaked course. 11-1 shot Collier Hill sat in the pocket in second, with 26-1 shot The Last Drop saying with him in third. Favorite Kastoria was slowest out of the starting gate and raced near the back of the field early. Around the far turn, Last Answer continued to hold the lead but Collier Hill was quickly closing the gap. After 1 1/4 miles in 2:12.33, Collier Hill took over the lead at the top of the stretch but John Velazquez and Go Deputy, who raced in mid-pack early, was just 1 1/2 lengths back with a furlong to go and was gaining with every stride. The pair battled it out through the final 1/16, with Go Deputy poking his head in front briefly, but Collier Hill dug in late to just hold him off by a nose in a photo finish, completing the 12-furlong trip in 2:37.34. It was a long 3 1/2 lengths back to 8-1 local hope Sky Conqueror in third. Kastoria came out four wide on the turn but showing no response when asked by jockey Mick Kinane, finishing a disappointing eighth. 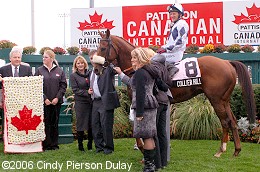 Collier Hill in the winner's circle. At 8-years-old, he is the oldest horse to ever win the International by a full two years. Jockey Dean McKeown, winning in his first career start in North America, said, "He has been all over the world, my horse doesn't know defeat. We have been to Dubai, Germany, Sweden, and he has won everywhere, and as an eight year old, he is just an incredible, very talented horse, that doesn't get the recognition that he deserves. My plan was to ride him handily because if he gets buried in the pack he doesn't use his action and the best way to ride him is to switch him into daylight as soon as you can. (Go Deputy) headed me two strides before the line but he came back gamely and I knew I had won. My horse put his nose out right where it mattered. He started off his career as a jumper of hurdles. He just got better and better, he is just a pleasure to do anything with." 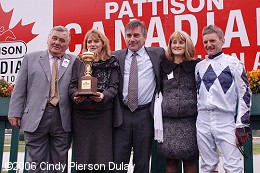 The trophy presentation with owners Russell Hall on the left and Richard Crowe in the center. Majority owner Hall said, "He's done very, very well, as he always does. He's an honest genuine horse. Wherever he goes, he's proud of himself and presents himself as a star. I imagine the Hong Kong Vase at Sha Tin will be the next stop and the plan will be to go back to Dubai in March for another shot at the Sheema Classic." Crowe added, "All options are open for him and I am sure he will be running abroad before the end of the year. I only bought my share a year ago and things couldn't have worked out better for me." 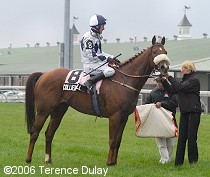 Collier Hill poses for the cameras after the race. They never did put the flower blanket on him. Winning trainer Alan Swinbank was interviewed by telephone from England after the race. He said, "I could see as they turned into the straight, I thought we had every chance. Dean had him on the inside. He had that rail to help him. And he just got up in the dying strides. He was headed about 50 metres out and he got back to him again. He's a very, very brave horse. He's a very good horse. I always thought that he'd beat Kastoria, the favorite. He was on better terms than when he met her at The Curragh Cup in Ireland. That was back in June." 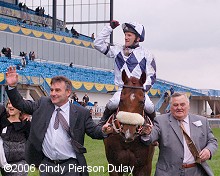 Jockey Dean McKeown celebrates while owners Richard Crowe and Russell Hall lead Collier Hill while parading for the fans after the race. Winning trainer Alan Swinbank said, "It's too early to say where he'll go. If he didn't run again until next year, it wouldn't bother us really. Let's see how he comes out of it. If he's fit to go to Hong Kong we'll have a go. If he's not, we'll go back to Dubai next year." 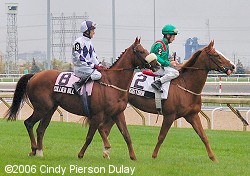 Collier Hill and post time favorite Kastoria circle behind the gate before loading. The European horses stayed fairly segregated from the North American horses before the race, taking off and bypassing the post parade and then circling separately behind the gate. 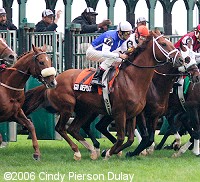 Second place finisher Go Deputy breaks from the gate. His jockey John Velazquez said, "I pulled him out of there when he went to the first turn. I wanted to get in position where I was close enough not too far back, I had a little hard time to go through the first turn, put him through the outside, the backside, he seemed to go a lot better. The second turn he kind of hit a few soft spots again, and he kind of backed off a little bit. He picked him up a couple of times on the turn, he kind of started to get his momentum back. And down the lane, I asked him, and he ran, and I actually thought I was going to go by the other horse, but the other horse beat us. He handled it well, but, like I said, he had a couple of soft spots on the turn that he hit pretty deep, but, he came out all right." 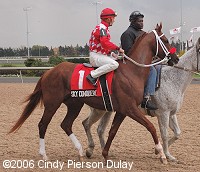 Third place finisher Sky Conqueror in the post parade. His jockey Todd Kabel said, "My horse had some trouble handling the turf down the backside and when he finally got a hold of it turning for home, I had a chance to split horses, but by the time I got there, it closed. I had to check and come around." 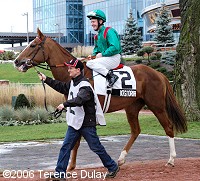 Eighth place finisher and beaten favorite Kastoria in the paddock before the race with jockey Mick Kinane aboard. Kinane said, "We missed the break and I bided my time. I was happy with her one minute but the next I wasn't and she faded out of it." 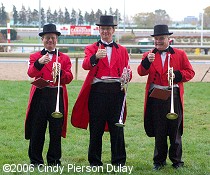 The Woodbine Bugle Boys pose for a shot before calling the Nearctic Stakes to the post. 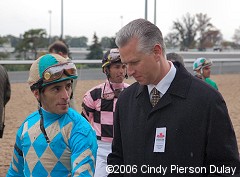 Trainer Todd Pletcher had two shots at tying the record for most graded stakes wins in a year with Ready's Gal in the E.P. Taylor and Go Deputy in the Canadian International. They finished 7th and 2nd, so he will have to wait for another day to get the record.