The top turf race of the Saratoga meet is the $500,000 Sword Dancer Invitational (G1), a 1 1/2 mile marathon over the inner course for older horses. A field of eight went to post before a crowd of 31,692, with last year's Canadian International winner Relaxed Gesture sent off as the 7-10 favorite off his third place finish in the United Nations last out. 6-1 second choice and Bowling Green Handicap winner Go Deputy was scratched out of the Arlington Million by trainer Todd Pletcher and entered here instead rather than face stablemate English Channel. Wild Desert was the 7-1 third choice, despite finishing second in his last two starts including the Suburban Handicap, and making his turf debut here.

Relaxed Gesture battled on the front with 30-1 outsider Ramazutti down the backstretch and around the far turn first time, through slow fractions of 24.68 and 49.27 over the firm going, with 8-1 Grand Couturier stalking the pace in third. Ramazutti took over the lead after a mile in 1:39.84, as Relaxed Gesture dropped out of contention, and he fought for the lead with Grand Couturier into the final turn of the 3-turn affair. Through the stretch, Go Deputy, who had raced back in seventh early, closed well and took over the lead inside the 3/16 pole. In the final furlong he held off the late charge of 10-1 Silver Whistle to win by 1 3/4 lengths in a time of 2:26.78 for the 1 1/2 miles. It was another 1 3/4 lengths back to Grand Couturier in third. Wild Desert finished last. 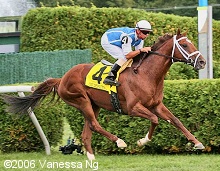 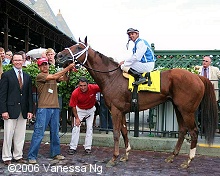 Go Deputy in the winner's circle. Winning jockey Eibar Coa said, "My main concern was saving ground; that's what Todd (Pletcher) wanted me to do. They broke kind of slow, so I let him stay back there. Everything worked out in the first two turns. Going down the backside, I realized we were going slow and we were in traffic. I got outside and clear from traffic. In the stretch, he gave me something extra. This horse has a big heart." 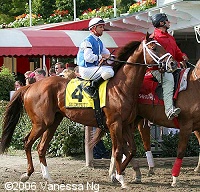 Go Deputy heads out for the post parade. Seth Benzel, assistant to winning trainer Todd Pletcher said, "In the first part of the race, I was a little surprised not to see (stablemate) Ramazutti up there to take charge. Go Deputy is a developing horse, and what can I say? He's put together back-to-back big efforts. Today was another feather in his cap." 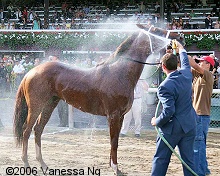 Go Deputy gets hosed off before heading back to the barn. 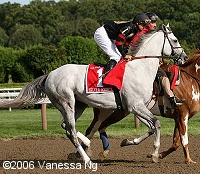 Second place finisher Silver Whistle in the post parade. His jockey Mike Smith said, "I had a dynamite trip. The horse ran very well. My horse will run two miles, but the winner just had a better turn of foot than we did." On Sunday morning, trainer Bill Mott said, "I thought we were good enough to beat the winner, but we weren't. Still, we were pleased. He's still a young horse who's still developing. He's improving a little bit at a time. It looks like he can always have a piece of it." 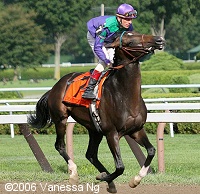 Third place finisher Grand Couturier acts up a bit in the post parade. 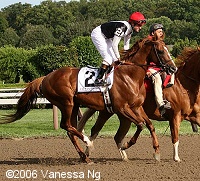 Fifth place finisher and beaten favorite Relaxed Gesture in the post parade. His jockey Kent Desormeaux said, "I had (Ramazutti) eye-balling me the whole way. I wasn't enjoying my position. I tried to get away from him and open up and get him to settle, but he kept engaging me. I was never comfortable at any point. When I finally got out, he had nothing left."