After a week without racing in New Jersey thanks to a state budget impasse, Monmouth Park finally reopened on Saturday, just in time for the $750,000 United Nations Stakes (G1) for older horses. Only seven went to the gate in this 1 3/8 mile event over the newly rebuilt turf course, with Canadian International winner Relaxed Gesture sent off as the 2-1 favorite over Woodford Reserve Turf Classic winner English Channel at 5-2. Also in the field were the Manhattan winner Cacique at 3-1 and Dixie Handicap winner Better Talk Now at 7-2.

As expected, Better Talk Now's stablemate and "rabbit" Shake the Bank, the 85-1 longest shot, went to the front and set a respectable pace of 24.37, 47.66, 1:11.92, and 1:36.00 while as many as 3 1/2 lengths clear of the field. Cacique and 47-1 shot Ramazutti settled off the pace for the first lap of the course, while English Channel was just behind them, saving ground along the hedge for all three turns. Rounding the far turn for the last time, Shake the Bank tired and dropped from contention, but Better Talk Now, who had raced wide throughout, lacked his usual late kick and finished fifth just ahead of the pacesetter. English Channel came out three wide into the late, drew even with Cacique inside the 3/16 pole and after a prolonged drive, finally pulled ahead to win by 1/2 a length at the line, in a course record time of 2:13.24 over "good" going. It was another 1 3/4 lengths back to favorite Relaxed Gesture in third. 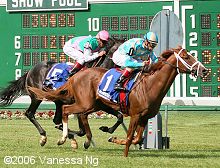 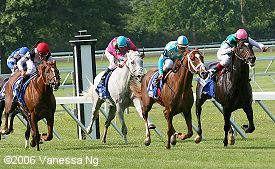 English Channel and Cacique duel down the stretch followed by Relaxed Gesture on the outside and Silverfoot in the center. Winning trainer Todd Pletcher said, "I was concerned on the first turn when he looked a little rank. But then he got it together and dropped his head, and I knew he was fine. It was his first time around three turns today. He had run the distance before and was checking out new ground that way, but once he finally settled in after the first 3/8 of a mile, it was all good from that point. This is as good as it gets, at least on the East Coast. You won't run against many fields as tough as this." 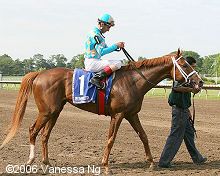 English Channel circles after winning the United Nations. Winning jockey John Velazquez said, "Today he was more relaxed, and saved some energy. When I asked him, he kicked in. He handled the footing fine. I wanted to rate him behind horses and he was able to do that. I knew once that happened that he'd be tough. Once he was able to settle, I had no doubt he'd kick on in the lane, and he did just that." 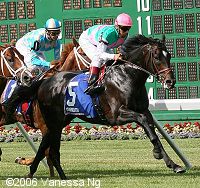 Second place finishe Cacique leads the pack chasing the rabbit first time by. Edgar Prado said, "He ran a huge race. He's been knocking heads with the winner all season long, and he just got the best of us today." 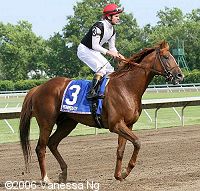 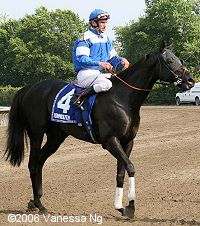 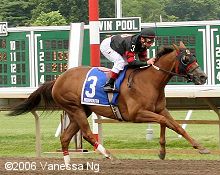 On the undercard was the $65,000 Mr. Prospector Stakes for older horses sprinting 6 furlongs. 2-1 favorite High Blitz took over the lead after 3 furlongs, then drew away in the stretch, easily holding off the late charging 9-2 Wild Jam to prevail by 2 lengths in a time of 1:09.14 over the fast track. It was a long 4 1/4 lengths to 4-1 shot Razor in third. Winning jockey Chuck Lopez said, "I learned how to ride him last out. Justin (trainer Nixon) told me not to get in a speed duel. He was running easily early, and we put away Razor. After that, Wild Jam was running on in the stretch, but I got my horse to switch leads and he leveled off very nicely. It was a great race from him."
Results chart from Equibase