The undercard of the 2006 Preakness Stakes included three stakes races on the turf course. The highlight of these was the $250,000 Dixie Stakes (G2), a 1 1/8 mile trip around the infield oval for older horses. This race matched up two Breeders' Cup winners, as 1-2 favorite Artie Schiller, winner of the 2005 Mile, took on 7-2 second choice Better Talk Now, winner of the 2004 Turf, who was coupled with stablemate and rabbit Shake the Bank. Check here for the dirt undercard stakes. 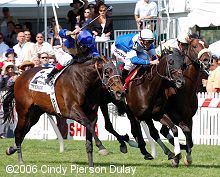 As expected, Shake the Bank opened a clear lead right away, but did control the pace through slow fractions of 25.14, 48.38, and 1:12.03 while as many as 3 1/2 lengths ahead of Artie Schiller in second. Turning for home, Shake the Bank was through and dropped out of contention, relinquishing the lead to Artie Schiller who was 2 lengths clear with a furlong to go. However, the rabbit did his job as Better Talk Now, who was at the back of the pack down the backstretch, closed strongly through the lane to just head his head in front of another closer, 12-1 shot Dreadnaught, It was just another neck back to the tiring Artie Schiller in third. 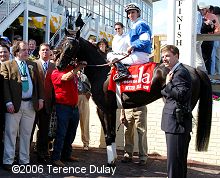 Better Talk Now in the winner's circle. Winning trainer H. Graham Motion said, "Better Talk Now is so honest. I mean, what more can I say about him. It amazes me he went off at 7-2. This isn't his distance, don't forget. I felt about as confident today as I've felt for a while. Tommy (Turner, the rider of rabbit Shake the Bank) did a great job. He stumbled out of the gate. What a job he did to compensate. I told him to go a half in 47 (seconds) and he went in 48 (seconds). They both ran great races." 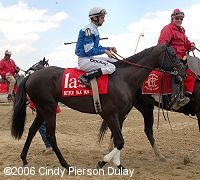 Better Talk Now in the post parade. Winning jockey Ramon Dominguez said, "He was feeling excellent, relaxed and ready to go. He split horses very gamely. He did everything he did before. There wasn't a whole lot of room. He was pretty game getting in there. He certainly ran a huge race, especially off the layoff." 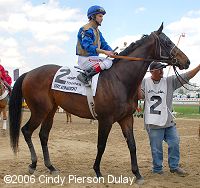 Second place finisher Dreadnaught in the post parade. His jockey Alex Solis said, "I'm very disappointed that he didn't win. He broke great, sitting in the position I wanted and had a good clean trip. He finished up strong." 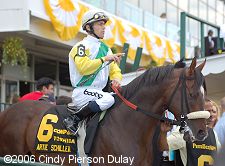 Third place finisher and beaten favorite Artie Schiller comes on to the track for the race. Last year he was second in this race as the beaten favorite. 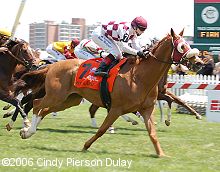 The $100,000 Baltimore Breeders' Cup Turf Sprint saw 9 older horses go 5 furlongs on the turf. 7-1 shot My Lord was unhurried early, but came out 7 wide around the turn to circle the field and get up by 3/4 length over 8-5 favorite Souhern Missile in a time of 57.40. It was just a nose back to Spring Kitten in third.
Full results chart from DRF 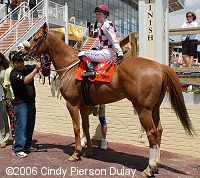 My Lord in the winner's circle. Winning jockey Rosie Napravnik said, "She really doesn't have a lot of speed early. She always seems to come on strong at the end. In races like this, sometimes they go fast early and you can't catch them. Sometimes they go fast early and stop. Luckily that's the way it turned out. I kind of got stuck behind somebody, but I did not worry. She really got the job done. It feels terrific winning on Preakness Day. My whole family is here." Rosie is currently the leading apprentice rider in the US. 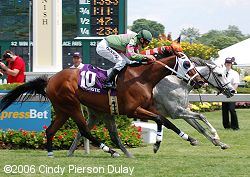 The $100,000 Gallorette Handicap (G3) featured older fillies and mares at 1 1/16 miles on turf. 8-1 shot Ozone Bere closed from seventh early on to prevail by a head over 6-1 shot Humoristic, who had stalked the fast pace of 59-1 outsider Queen Supreme early. It was just a length back to Art Fan in third, a nose in front of 9-5 favorite My Typhoon in fourth.
Full results chart from DRF 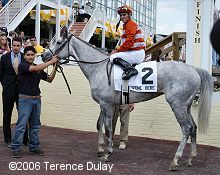 Ozone Bere in the winner's circle. Nicholas Bachalard, assistant to winning trainer Chistophe Clement, said, "We had a good draw and there was quite a bit of speed in the race. So we just wanted to keep our good position. Our jockey gets all the credit for winning this race. He timed it perfectly and was able to get through on the inside when he needed to. This is our first race in this country and we were not sure how well we would do, so we have not determined where she will run next."