Along with the Preakness Stakes, there were four other stakes races on the Pimlico main track on Saturday afternoon making for a total of eight stakes on the card when you include the three turf stakes. Although the Preakness was the main attraction, these seven races were worth a total of $950,000. 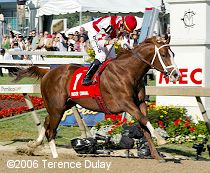 The $100,000 William Donald Shaefer Handicap (G3) featured older horses at 1 1/8 miles. 8-5 second choice Funny Cide was originally entered to run in Friday's Pimlico Special (G1) but trainer Barclay Tagg opted for what should have been the easier spot. Master Command was sent off the 6-5 favorite while Andromeda's Hero was the 7-2 third choice.

Jockey Garrett Gomez sent the favorite to the front right away and he set an easy pace of 23.80, 47.63, and 1:12.34 while being stalked by 16-1 shot Summer Book most of the way. Andromeda's Hero made his move on the far turn and drew even with the pacesetter with a furlong to go, but Master Command found another gear and powered away to win by 2 3/4 length in a time of 1:49.42 over the fast track. It was another 4 3/4 lengths back to Funny Cide in third.
Full results chart from DRF 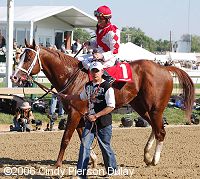 Master Command heads for the winner's circle after the race. Winning jockey Garrett Gomez said, "The plan wasn't to go for the lead early. He was in the gate really keyed up. He just took off like a rocket ship. I kept looking to find out where Funny Cide and he never came up on the outside. At the half, I wanted to sneak away, and my horse wouldn't help me, until (Andromeda's Hero) came alongside of him. When that happened he got real game. He actually got by us by a half length, but this horse is a fighter." 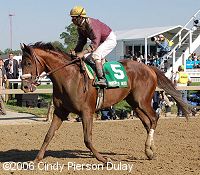 Second place finisher Andromeda's Hero returns after the races. His jockey Edgar Prado said,"He made a big move and was game down the stretch, but we hooked a horse that had an answer." 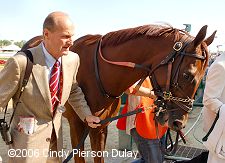 Third place finisher Funny Cide and trainer Barclay Tagg head for the paddock before the race. Richard Migliore aboard third place finisher Funny Cide said, "He ran an OK race, but there were a number of game runners in here. The top two ran real big. The first eighth he was a little quiet. Then I tucked him in and he got really strong inside of horses. He pulled me up in behind them and I didn't have a place to go down the backstretch when he had a lot of run. I think he got a little discouraged." 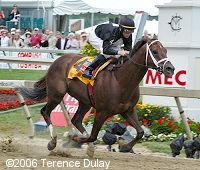 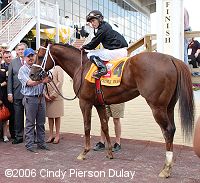 Friendly Island in the winner's circle. Winning jockey Garrett Gomez said, "I actually got in front of (Gaff) and I didn't think I would, early. Once I cleared over, I was loving my trip. Kazoo got the lead, but I wasn't going to let him away too soft. This horse was push-button all the way home. I was just a passenger. I had all the confidence in the world in Todd. They're all good horses, and it makes my job easy." 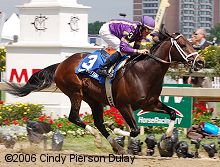 The $100,000 Sir Barton Stakes has been used as a Belmont Stakes prep in the past, as it features 3-year-olds skipping the Preakness. Ah Day, who had been considered for the Preakness earlier in the week, was the 11-10 favorite in the field of seven, with Ultimate Goal the 7-2 second choice. However, 4-1 third choice High Cotton got to the front right away and set a brisk pace of 46.83 and 1:10.98 while being stalked by Ultimate Goal. Garrett Gomez asked High Cotton for run at the top of the stretch and got it, as he switched leads and drew away to win by 5 1/2 lengths in a time of 1:42.95 for the 1 1/16 mile distance. It was another 5 2/4 lengths back to 6-1 Little Cliff in third. Favorite Ah Day failed to fire, racing in fourth most of the way and then fading to fifth at the end.
Full results chart from DRF 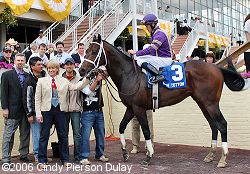 High Cotton in the winner's circle. Ginny DePasquale, assistant to winning trainer Todd Pletcher said, "I think (High Cotton) pretty much ran the way he wants to run. Apparently, he likes to run loose on the lead. He won at Turfway like that. He was in a bit of trouble at Oaklawn and broke in a little bit of a tangle coming out of the gate. He had a clean trip this time." 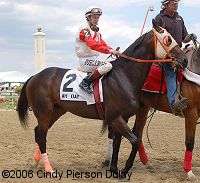 Fifth place finisher and beaten favorite Ah Day in the post parade. He passed on the Preakness in favor of this easier spot. His trainer King Leatherbury said, "(Jockey Ryan Fogelsonger) said he had no horse at the half-mile pole. He said he wasn't firing. I don't know. He threw in a bad race. That's the first bad race he's thrown in. It happens." 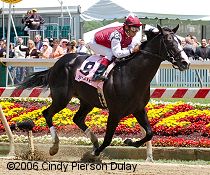 The $100,000 Hirsch Jacobs Stakes (G3) saw six 3-year-olds sprint 6 furlongs on the main track. 3-5 favorite Songster ran to expectation, leading every step of the way and drawing off to a 10-length victory in a time of 1:09.72.
Full results chart from DRF 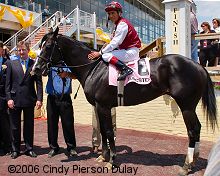 Songster in the winner's circle. Winning trainer Tom Albertrani said, "That was impressive, very impressive. He was training a little better going into this race than the Bay Shore. Cutting back in distance wasn't going to be a problem. He's got a lot of speed, so we weren't concerned about that at all. I just told Edgar, 'Let him run where he's comfortable.' Edgar said he didn't handle the slop in his last start." Albertrani would go on to win the Preakness with Bernardini later in the day.