The Belmont Stakes undercard featured two handicap races on the turf, the Manhattan (G1) at 1 1/4 miles and the Just a Game (G2) for the fillies at a mile. After rain most of the week, including the evening before, the turf course was rated yielding but felt a lot softer than that when I walked on it.

The $400,000 Manhattan Handicap (G1) featured top older horses going 1 1/4 miles over the inner turf course and is the traditional undercard feature on Belmont Stakes day. Seven went to post in this event with Cacique sent off as the 2-1 favorite over 5-2 English Channel and European shipper Grey Swallow at 7-2. 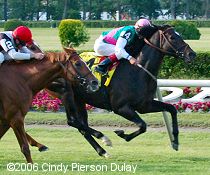 Cacique and English Channel battled it out on the front end around the clubhouse turn and through the backstretch through slow fractions of 24.71 and 51.30 due to the soft going and the stiff headwind. Grey Swallow sat near the back of the pack early on after getting shuffled back at the start. The pair held the lead around the far turn, but the closers were just hitting their best strides. Grey Swallow and 4-1 Relaxed Gesture were closing well, but Cacique stubbornly held on through the stretch. In a blanket finish, Cacique just held off Relaxed Gesture, whose jockey Kent Desormeaux lost his whip at the sixteenth pole, by a head in a time of 2:04.10 for the 10 furlong trip, and it was a neck back to Grey Swallow in third, who was a head in front of English Channel in fourth.
Full results chart from DRF 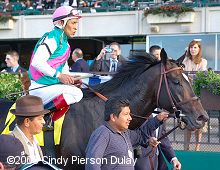 Cacique takes his walk down Victory Lane after the Manhattan. Winning jockey Edgar Prado said, "We wanted for him to be placed where he was comfortable. Once he took the lead, he relaxed pretty good. I didn't have pressure, so that helped a lot. I know the horse had been training well in the mornings; I had worked him a couple of times. I think Bobby did a great job in getting this horse to go a mile and quarter. He was a little late switching leads. I had to bounce him around a little, but once he did, he had another gear. He didn't see that horse way outside." 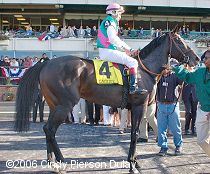 Cacique was a bit antsy in the winner's circle and kept having to be circled. Winning trainer Bobby Frankel said, "He's the kind of horse that waits on horses. He's a real fighter. I don't know that he ever saw Relaxed Gesture. I was okay with him on the lead. If you look at his form, he went wire to wire with some good horses in Europe. The family seems to love racing in the U.S. I just hope they keep sending me these kind of horses. We'll probably look at the Arlington Million [Grade 1, August 12, 10 furlongs, turf, Arlington]." 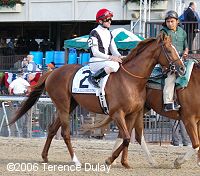 Second place finisher Relaxed Gesture in the post parade before the race. His jockey Kent Desormeaux said, "It sure looked like I had it. I just saw the replay, and obviously, I missed the head bob. I was in front before the wire and after it. He handled the yielding turf okay. We just got beat." Relaxed Gesture was second in this race last year as well. 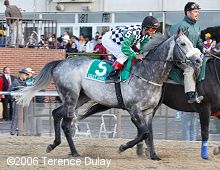 Third place finisher Grey Swallow in the post parade. His jockey Alex Solis said, "He broke a step slow and I had to be patient with him. He ran a brilliant race. He came running and did everything I hoped he would do." 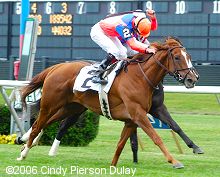 The $285,000 Just a Game Handicap (G2) originally had six older fillies and mares entered, but two were scratched because of the soft going, so a short field of four entered the 1 mile event over the Widener turf course with Gorella sent off as the 3-5 favorite over 3-1 Pommes Frites. Pommes Frites took off on the field right away and was as many as eight lengths clear through easy fractions of 24.94 and 48.89 as jockey Cornelio Velasquez tried to steal the race on the front end. Pommes Frites still had a five-length advantage with a furlong to go but was tiring late because of the slow course and the strong headwind on the backstretch. Gorella, who sat in fourth early, closed with every stride through the stretch to just get up for the win, in a time of 1:37.14. It was a long 7 1/4 lengths back to 7-1 longest shot Ozone Bere in third, and 6 more to 4-1 third choice Mirabilis in last.
Full results chart from DRF 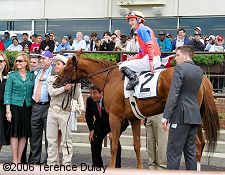 Gorella in the winner's circle with trainer Patrick Biancone peeking out from under her neck. Biancone said, "Julien (Leparoux aboard Gorella) ran a great race. With only four runners, it was a little harder for us. We knew Pommes Frites would be in front. If we chased her and went too fast early carrying top weight, that could have hurt us. She needs to be ridden covered up. She needs to see daylight as late as possible. To me, she is the best grass filly in the country. The Beverly D (August 12, $750,000, Arlington Park, 9 ˝ furlongs) is out next goal." 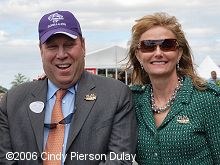 Gorella's owners Mr. and Mrs. Martin B. Schwartz. Mr. Schwartz seemed ecstatic over the win and declared "Vive La France" after the race. Gorella is French-bred as are her jockey Julien Leparoux and her trainer Patrick Bianone.