A crowd of 157,532 converged on Churchill Downs under sunny skies and mild temperatures for the Grade 1 Kentucky Derby on Saturday. Before the main event, they were treated to 5 more graded stakes races, two of which are Grade 1. These races may be a preview of the Breeders' Cup World Championships which will be held at Churchill Downs in November. 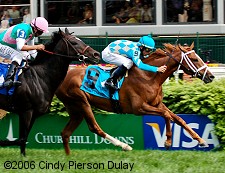 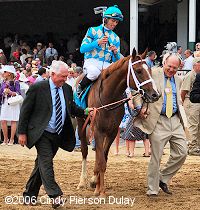 English Channel going to the winner's circle of the Woodford Reserve Turf Classic. Jockey Garrett Gomez said, "I was very confident just before I turned (for home) and when I asked him, I've gotten to see all kinds of videos and watched him run, his heart makes three of him. He's a talented horse and he's got a huge heart." Trainer Todd Pletcher added, "We had a perfect trip. I was a little concerned, because on paper, it didn't look like there was very much speed in there. I was hoping that we could follow somebody and fortunately a couple went out there and we got the perfect trip." He said English Channel will go next in the Manhattan at Belmont Park. 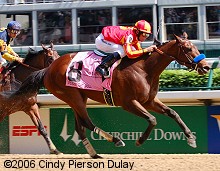 The $291,000 Humana Distaff Handicap (G1), the first of three Grade 1 events on Saturday, featured a field of six older fillies and mares sprinting 7 furlongs on the main track. 9-10 favorite Behaving Badly battled on the front end with 14-1 shot Bending Strings through a quarter in 23.05 and a half in 45.89. The favorite had the lead at the 1/8 pole, but 4-1 third choice Pussycat Doll and jockey Garrett Gomez was closing late from fourth along the rail to collar the favorite with a sixteenth to go to win by just a length in a time of 1:21.62 over the fast track. It was 1 1/4 lengths back to Bending Strings in third, while 7-2 second choice Splendid Blended had a poor start and disappointed in sixth.
Full results chart from DRF 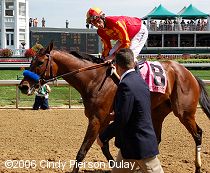 Pussycat Doll and Garret Gomez return after winning the Humana Distaff. Jockey Garrett Gomez, winner of two Grade 1's on the afternoon, said, "She got stirred up a little today. Stirred up in the post parade. Maybe it was the big crowd. So I had to get after her some when the running came, had to get her mind where it needed to be. I hit her on the shoulder, though. Not so much behind. She responded well. She ran great and now she's a Grade I winner." Trainer Bob Baffert added, "I'm glad she won this one for Mike (Pegram). He's got himself a Grade I winner and he bred her himself." 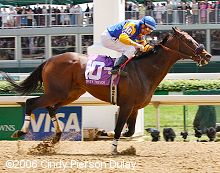 The first stakes race on Derby Day is the $229,000 Churchill Downs Handicap (G2) for older horses sprinting 7 furlongs on the main track. Battle Won was sent off as the 5-2 favorite with Charging Indian the 3-1 second choice. Battle Won set a brisk pace of 22.52 and 45.21 down the backstretch, but turning for home, 10-1 shot Trickey Trevor, who had stalked the pace in third out of trouble four wide, made his move to the front for jockey Russell Baze, took over inside the 3/16 pole and drew away to win by 3 lengths over 7-2 With Distinction. The running time was 1:21.68 over the fast track. Battle Won faded to fifth while Charging Indian had nothing in the stretch and was last.
Full results chart from DRF 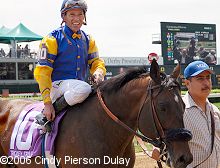 Jockey Russell Baze and Trickey Trevor after winning the Churchill Downs Handicap. Winning trainer Jerry Hollendorfer said, "It looks like even a veteran horse can run a little bit differently. I wasn't real confident about that horse running with that style (from off the pace). I thought we might jump out of there and get a soft lead, but usually around here, that doesn't happen. Russell (Baze) didn't really hustle him away from there and make him go off on the lead. He could have done that, but he just rode him relaxed and laid where he wanted to." 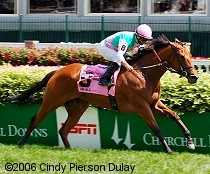 The $115,100 Churchill Downs Distaff Turf Mile (G3) is for older fillies and mares traveling 1 mile on the Matt Winn Turf Course. Wend was sent off as the 11-10 favorite off her 2 race winning streak. 10-1 shot Sis City took over the lead right out of the gate and slowed the pace down through fractions of 24.54, 48.80, and 1:12.79 over the firm going. Turning for home, 5-1 third choice Mirabilis, who had stalked the pace in third early while wide, accelerated to the front and was 2 1/2 lengths clear with a furlong to go. 28-1 outsider Special Grayce made a strong late rally from ninth but was left with too much to do, as Mirabilis prevailed by just a length in a time of 1:35.93. Wend stalked the pace in fourth the whole way but was flat through the lane and finished fourth.
Full results chart from DRF 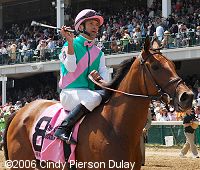 Jockey Patrick Valenzuela celebrates his win aboard Mirabilis in the Churchill Downs Distaff Turf Mile. Winning trainer Bobby Frankel said, "Patrick (Valenzuela) told me because this filly is so one-paced, that he was thinking about opening up around the turn with her to try to get a jump. But I told him no. I told him that since this stretch is so long, you need to wait. I told him to take a hold for as long as he could. He saw that he had that favorite (Wend) down inside and he did wait. She's a nice filly and now she's a graded stakes winner." Frankel said she would make her next start in New York. 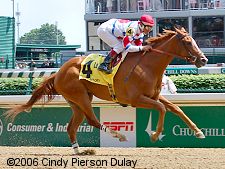 The $119,600 La Troienne Stakes (G3) featured nine 3-year-old fillies sprinting 7 1/2 furlongs on the main track. Adieu was sent off as the 8-5 favorite. 15-1 shot Morner set a quick pace of 22.59 and 45.68 over the hard and fast main track with 7-1 shot Joint Effort stalking her to the inside, while Adieu sat back in fifth but in close contention. Turning for home, jockey Edgar Prado sent Joint Effort to the lead and she never looked back, drawing away to win by 3 1/4 lengths, easily holding off the late-charging Adieu, in a time of 1:28.18. It was 2 3/4 lengths back to 7-2 second choice Smart N Pretty in third.
Full results chart from DRF 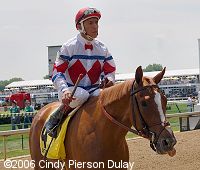 Joint Effort and jockey Edgar Prado after winning the La Troienne Stakes. Trainer Dale Romans said, "I thought she would run big today. The race at Keeneland you can just throw out because she's never run good on that surface. The Gulfstream race wasn't that bad; it was a tough race. And her race before that she won a stake. So she got on a track she likes and she put it all together. She's been running in good company. Adieu was coming off a layoff, so it was a good time to take her on." Jockey Edgar Prado added, "She was doing everything so easy, when the horse on the lead drifted out, I took the chance and sent her, and she went on. I just encouraged her a little bit, and she took off like a rocket."