The undercard feature for the Sword Dancer Invitational card was the $200,000 Alfred G. Vanderbilt Breeders' Cup Handicap (G3) for older horses sprinting 6 furlongs on the main track. War Front was sent off as the 9-5 favorite off of runner-up finishes in the Tom Fool and the Deputy Minister, over undefeated 2-1 second choice Afrashad making his stakes debut. Metropolitan Handicap third place finisher Mass Media was the 3-1 third choice.

Afrashad and 11-1 shot Bishop Court Hill battled for the first quarter mile down the backstretch in a brisk 21.90 seconds, before Afrashad dropped from contention and favorite War Front moved out to the front along the outside to take over the lead entering the far turn through a half in 45.01. War Front pulled away to a 3 length lead with a furlong to go, and easily held off the late charge of 6-1 Judith's Wild Rush to win by 2 1/2 lengths in a time of 1:10.21 over the fast track. It was another 1 1/2 lengths back to Mass Media in third, while Afrashad was fourth. 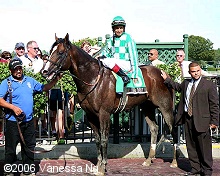 War Front in the winner's circle. Winning trainer Allen Jerkens said, "The fact that the track wasn't lightning fast helped him. The longer he runs, if he stays sound, the more he'll rate. Hopefully, he'll be sound enough for the Forego (September 2). He won't need much work for that, but it's going to be a tougher field. That's the next plan, if everything goes okay." 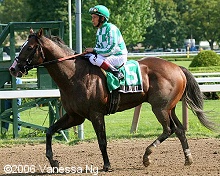 War Front returns after the race. Winning jockey Jose Santos said, "I was reading the Racing Form last night, and I could see myself about a length behind the pace. I didn't want to be too far back because he has a lot of speed. I was surprised to see Bishop Court Hill tire so quickly. Turning for home, I asked my horse for run and he really kicked in. He finished well. The track is a little slow today. They should have finished in 1:09, but it is a pretty good time considering the track is slow." 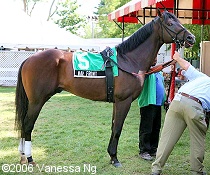 War Front being saddled in the paddock. 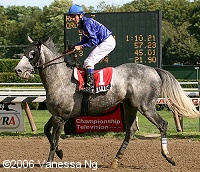 Second place finisher Judiths Wild Rush returns after the race. His jockey Kent Desormeaux said, "He's a fighter. When the competition came to him from the outside, he sunk his ears and put his head down as if to say, `I'm ready for a fight.' He won the battle for second, but he couldn't win the war against the winner." Trainer Reade Baker added, "I can't complain about his effort, that's for sure. We'll have to come back to the Forego, he paid for the trip today. I've always felt that seven furlongs around one turn was his best game." 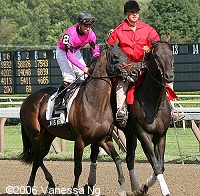