The highlight of Memorial Day weekend is the $600,000 Metropolitan Handicap (G1) at Belmont Park. In the 113th edition of this prestigious event before a crowd of 14,864, a field of seven went to post with Breeders' Cup Sprint winner Silver Train sent off as the 2-1 favorite. Also in the field were 5-2 second choice Bandini, coming off a win in the Skip Away at Gulfstream, and 7-2 third choice Sir Greeley, winner of the Westchester at Belmont last out. 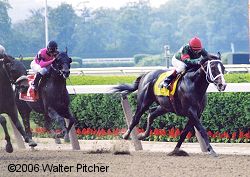 When the gate opened, jockey Javier Castellano sent 6-1 fourth choice Mass Media to the front and over to the rail to save ground, while Edgar Prado aboard the favorite stalked him close behind and just to the outside through a brisk pace of 22.78, 44.84, and 1:08.90 over the fast main track. At the top of the stretch, Mass Media began to tire and Silver Train eased alongside him, poking his head in front with a furlong to go. Silver Train held off the late charge of 7-1 shot Sun King, who had raced at the back of the pack early, to prevail by a head in a time of 1:34.27. It was 2 3/4 lengths back to Mass Media in third, and a long 4 1/2 back to Bandini in fourth. Sir Greeley disappointed in sixth. 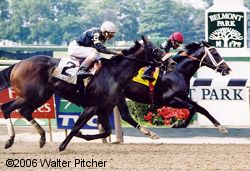 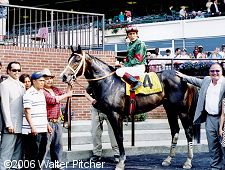 Silver Train in the winner's circle. Winning trainer Richard Dutrow Jr. said, "I haven't seen a horse of this caliber love a track so much, and that's great for us. He can do anything, and Edgar (Prado) has such a knack for knowing what to do and when to do it . That's why we got the job donetoday. If this race were run at Aqueduct or anywhere else in the world, I'm sure he would have gotten beat. I was sweating, but he dug down and got it done. It was beautiful." When asked when he would start next, Dutrow said, "I have to look at the Suburban (G1, July 1, 1 1/4 miles) - I have to look for as many good races for him here as possible. He's not going to go up to Saratoga. I don't know why he wouldn't get a mile and a quarter. I guess I'll find out at the eighth pole." 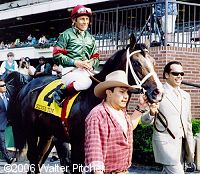 Silver Train and Edgar Prado take their walk down Victory Lane after winning the Met Mile. Prado said, "I wasn't surprised that Mass Media went from his post (1). My horse was going nice and easy. He just loves this track; he proved that last year in the Breeders' Cup. He tries so hard. I was still running at the end. I knew it was going to be close, but my horse was still running." 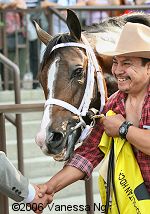 Silver Train's very happy groom gets a handshake from trainer Richard Dutrow after the race. 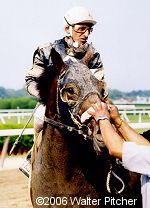 Second place finisher Sun King returns after the race. His trainer Nick Zito said, "It's a little frustrating. In the Donn, we finished second. In the Pimlico Special, we finished second. In the Met Mile we finished second, and we beat Pletcher all three times. It's like the freakiest thing ever. The horse ran great. He ran his guts out. This was a tough beat. We lost to the horse that won the Breeders' Cup Sprint over this track. We're there all year in these Grade 1s, we need to win one. I'm grateful to these horses for trying so hard. This race just adds to Sun King's legacy. I guess if we had to lose, we lost to the right horse. I love Sun King." Jockey Rafael Bejarano added, "He finished so strong. No. 4 (Silver Train) just never stopped. My horse was trying all the time. I thought I had the 4-horse, but he just kept coming back." 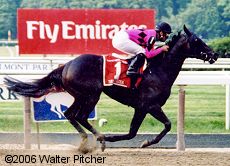 Third place finisher Mass Media. His jockey Javier Castellano said, "He had the inside post going a mile, I had to go. He fought all the way, and I think he ran a great race." 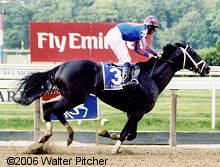 Fourth place finisher Bandini. His jockey Garrett Gomez said, "He's probably just a little better at two turns or a mile and an eighth. The other horses are more sprinters. When we left there, he kind of got shuffled back. From then on, I was in everyone else's pocket. He had every chance to get it done, but they just kicked on."