The $1 million Arlington Million (G1) was the world's first million-dollar race when John Henry won the inaugural edition in 1981, and to this day continues to attract top older turf horses to ship in to Arlington Park in suburban Chicago for this prestigious 1 1/4 mile trip on the turf course. In this year's edition, a crowd of 29,979 came out on a warm sunny Saturday afternoon to see a field of ten enter the starting gate in the 24th renewal of the Million.

Todd Pletcher trainee English Channel was sent off as the 2-1 favorite off his wins in the Woodford Reserve Turf Classic at Churchill Downs and the United Nations at Monmouth. Pletcher had entered Go Deputy as well but scratched him the day of the race, opting to run him at Saratoga in the Sword Dancer instead. Also in the field were Coolmore representative and 7-2 second choice Ace who was second in the Ladbrokes International at the Curragh in his last start, and 4-1 third choice Cacique, winner of the Manhattan Handicap at Belmont Park.

When the field was sent on its way, 5-1 fourth choice The Tin Man went right to the front, with 39-1 longest shot Major Rhythm and Cacique close behind. Jockey Victor Espinoza aboard The Tin Man sat chilly and slowed the pace down the backstretch, through easy fractions of 24.75, 50.37, and 1:15.18 over the firm going. Entering the stretch, Cacique pulled up alongside the pacesetter after a slow mile in 1:38.64, but The Tin Man fought him off and pulled away to a 2-length lead at the 1/8 pole. Cacique fought back but could not get past The Tin Man, who held him off to win by a length in a time of 2:01.35 for the ten-furlong feature. It was another 1 1/4 lengths back to 14-1 Soldier Hollow, who held off favored English Channel for the show spot. Ace failed to rally after racing midpack early, finishing sixth. Eight-year-old The Tin Man is the second-oldest horse to win the Arlington Million behind John Henry's second win in 1984 at age 9. 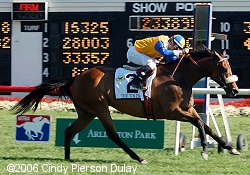 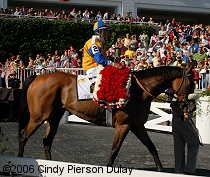 The Tin Man in the winner's circle with his flowers. Winning jockey Victor Espinoza said, "On the first turn I knew the pace was slow. Then, turning for home when no one was coming to me, I knew we were going to win the race. Any time there's a slow pace, he's hard to catch. This was the second easiest win I've ever had, the first was the (2002) Kentucky Derby on War Emblem." When asked about why his boots did not match, Espinoza explained, "When I unpacked my things, I had only one boot so I had to borrow one from Rene Douglas. You can see one has a red top and the other a black top." 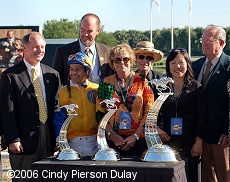 The trophy presentation with trainer Richard Mandella on the left and owners Ralph and Aury Todd in the center and far right. Winning owner-breeder Aury Todd said, "He's simply cool. He's just a classy guy, that's all. You can't really describe that (the feeling of winning the Arlington Million)." 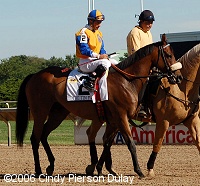 The Tin Man in the post parade. Trainer Richard Mandella, winning his first Arlington Million said, "I couldn't believe they let him do that (a half in 50.37). I had it in my mind that someone will press him a little bit. We could take him back if we had to, but Victor put him in the right place and did the right thing. (The Tin Man) has been around a long time. He's a pretty cool guy. I've been trying to win this race for a long time and it's nice to finally win it. It was a great show in running and a great feeling of accomplishment to finally one." 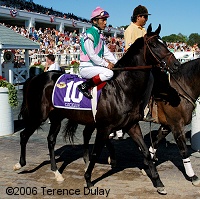 Second place finisher Cacique heads out to the track before the race. His jockey Edgar Prado said, "He broke well and got good position. I was exactly where I wanted to be. When I asked him for more he gave it to me, but we couldn't catch the winner." 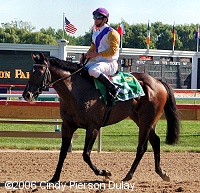 Third place finisher Soldier Hollow returns after the race. His jockey Rene Douglas said, "The horse really tried for me but the pace was too slow. I was hoping Prado (Cacique) would go after him but he didn't. My horse was a nice horse and he gave me a good ride. He ran absolutely a good race, I have no excuses." 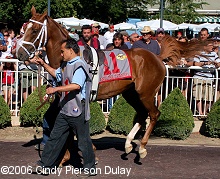 Fourth place finisher and beaten favorite English Channel acts up in the paddock. His trainer Todd Pletcher said, "It was a ridiculously slow pace. Hats off to The Tin Man. He slowed it down enough and stayed. End of story." Jockey John Velazquez added, "He didn't close anything. He didn't make any movement at all. He was there the whole time but he didn't put in any effort at all - just enough to be there but not enough to run."