The final stakes race on the Arlington International Festival of Racing card is the $400,000 Secretariat Stakes (G1) for three-year-olds going the Arlington Million distance of 1 1/4 miles on the turf. Only 6 entered this event, with Colonial Turf Cup and Coolmore Lexington winner Showing Up sent off as the prohibitive 1-2 favorite for owners Roy and Gretchen Jackson and trainer Barclay Tagg. Virginia Derby and Palm Beach Stakes winner Go Between was the 7-2 second choice, with European invader Ivan Denisovich the 6-1 third choice off a third place finish in the St. James's Palace Stakes at Royal Ascot.

When the gate opened, Showing Up broke quickest from the inside stall and battled with Go Between first time past the stands and around the clubhouse turn through a quarter in 24.32 and a half in 47.83. Down the backstretch, jockey Cornelio Velasquez loosened the reins on the favorite and he pulled ahead to a 1 3/4-length lead after 3/4 in 1:11.19. Entering the stretch, Go Between faded out of contention to eventually finish last of all, while Ivan Denisovich, who had raced fifth early, was moving up on the outside to challenge. Showing Up opened up to a 4 length advantage at the 1/8 pole, and easily held off the on-rushing Ivan Denisovich to win by 1 1/2 lengths in a time of 2:00.09, which was 1.24 seconds faster than The Tin Man's Arlington Million win earlier on the card. It was a long 4 1/2 lengths back to 10-1 Primary in third. 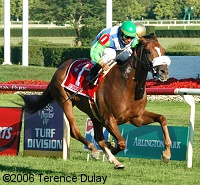 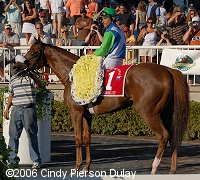 Showing up in the winner's circle. Winning trainer Barclay Tagg said, "I was impressed with him. He ran even better than I thought he would. I knew he'd run well but I never expected this. He has shown versatility in all of his races. Everything that happened to him, gotten in the way of him or anything like that, he's managed to work his way around it." 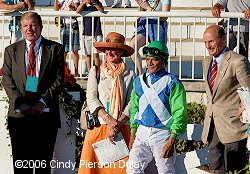 The connections in the winner's circle. From left to right, owners Roy and Gretchen Jackson, jockey Cornelio Velasquez, and trainer Barclay Tagg. 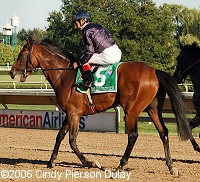 Second place finisher Ivan Denisovich returns after the race. His jockey John Velazquez said, "I bided my time and then I had to go 4-wide at the 1/4 pole. It was just too much to make up. He ran hard and if he didn't have to go around those three horses in front of me, I might have won it but that's part of racing." 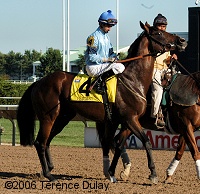 Third place finisher Primary in the post parade. His jockey Robby Albarado said, "He didn't negotiate the second turn really well but he straightened out turning for home and he kept coming. He ran a big race to be up for third." 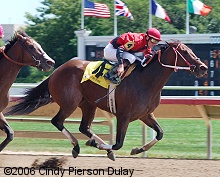 Along with the three Grade 1 turf races, there were three other stakes races on the Festival undercard. Each of these overnight events were run under allowance conditions with purses of $45,000-added. The first of these was the Smart Deb Stakes for 3-year-old fillies sprinting 6 furlongs on the main track. 3-1 second choice Morner rallied from fourth to get up for a 1/2 length victory over 4-1 Unreal Rocket in 1:10.56. 6-5 favorite Ada's Dream was sixth.
Results chart from Equibase 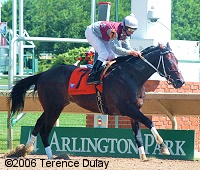 The Cigar Stakes featured older horses at 1 mile on the main track. 9-1 shot Sampson's Son stalked the pace of 33-1 Connections, then took over in upper stretch and drew away to win by 3 1/2 lengths over late-running 9-5 favorite Straight Line in a time of 1:36.78. 10-1 shot Tap Dancing Mauk was third.
Results chart from Equibase 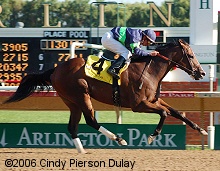 The Forward Pass Stakes featured 3-year-olds sprinting 7 furlongs on the main track. 2-1 favorite Off Duty took over the lead entering the turn after a half in 45.36, then turned away all challengers through the stretch to win going away by 1 1/2 lengths over 29-1 longshot Tally Up in a time of 1:23.08. It was just a nose back to 17-1 Hallowed Flag in third.
Results chart from Equibase