The $2 million Pattison Canadian International (G1) is the richest horse race in Canada, and is a Breeders' Cup Challenge "Win and You're In" event in the Turf division. A field of 8 older horses went 1 1/2 miles on Saturday, one complete lap of Woodbine's E.P. Taylor Turf Course, on a sunny but chilly afternoon with the temperature in the mid 40's. Champs Elysees, 3rd in this event last year, was sent off as the 5-2 favorite in his final career start, exiting a third place finish in the Northern Dancer Turf, the major local prep for the International. In to challenge the Juddmonte Farms homebred included 3-1 second choice Just As Well, winner of the Northern Dancer after finishing second to Gio Ponti in the Arlington Million, and 7-2 third choice and top European hope Jukebox Jury, the only 3-year-old in the field, exiting two straight wins in the Grand Prix de Deauville in France and the Preis von Europa in Germany.

When the gate opened, jockey Javier Castellano sent 5-1 fourth choice and defending champion Marsh Side to the front, and he set a reserved pace of 26.32, 51.35, 1:15.76, and 1:39.74 over the firm course, while as many as 3 1/2 lengths in front of Jukebox Jury and regular rider Royston Ffrench who stalked him in second. Jockey Garrett Gomez kept favorite Champs Elysees well off the pace in 7th and on the outside away from traffic trouble. Entering the stretch, Marsh Side held onto a short lead through 1 1/4 miles in 2:04.08, but the race set up for the closers. Jukebox Jury steadily gained on the pacesetter and gained a 1 length lead in midstretch, but Champs Elysees, who angled out to the center of the course, had a clear run at him. Under a steady drive, Champs Elysees passed Jukebox Jury in the final strides to get the win by 1/2 a length in 2:28.36. It was another 2 lengths back to 9-1 Buccellati third. 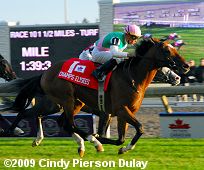 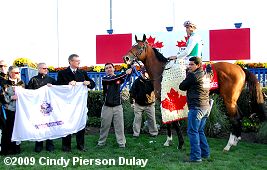 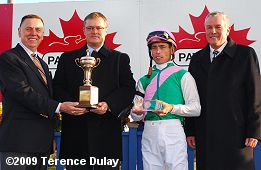 Right: Trophy presentation for the Canadian International with Randy Otto the president of Pattison Outdoor Advertising, racing manager for Juddmonte Farms Garrett O'Rourke, jockey Garrett Gomez, and Woodbine CEO David Willmot. O'Rourke said, "I just started looking at Garrett's body language, and he wasn't getting too excited so I think he had him measured all the way. At that stage when I saw how confident he was riding him, I was confident he was going to get up. There was no hint of panic at any stage in the way he was riding him so I had a fair idea he knew what he had underneath him. The jockeys are the ones on board and they can feel what they have underneath them and because he wasn't anywhere panicked he had a fair confidence that he had plenty of horse when he needed it." 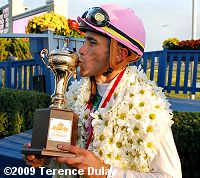 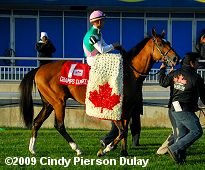 Left: Jockey Garrett Gomez kisses the trophy, a tradition at Woodbine. Gomez said, "As soon as we headed for the backside, they all started quickening a little bit. Champs Elysees quickened for a minute, and I thought, 'Let them go.' I'll just sit in here and wait on him, give him some confidence and see what happens. I just try to ride him with all the confidence in the world. He is probably one of the most talented horses I have seen. But he finds ways to get himself beaten.  He seems to never end up in the winner's circle on the big days.  I am glad to see him get a big one."

Right: Champs Elysees parades with his flower blanket after the race. 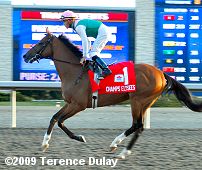 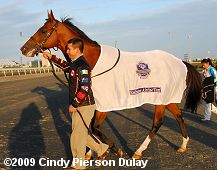 Left: Champs Elysees takes off after the post parade.

Right: Champs Elysees heads back to the barn after the race. Garrett O'Rourke, racing manager for winning owner-breeder Juddmonte Farms confirmed that Champs Elysees would be retired and will stand at stud at Banstead Manor in England. "It makes it all the sweeter (that his last start is a win). And to go out on such a huge win like this, is obviously a huge boost to his stallion career as well.  He deserves it. He has been a tremendous servant. He is very game, he is very talented. We have too many arrangements already made for the horse's future and some of those were made even on the assumption he could win. I spoke to Bobby (Frankel, trainer) and he's especially delighted. This is a plan Bobby hatched months ago. That makes it all the more enjoyable, something so well planned and it all comes to fruition." 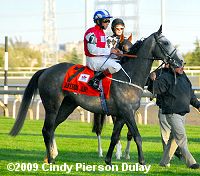 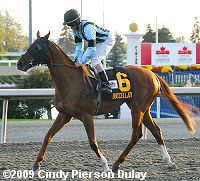 Left: Second place finsher Jukebox Jury heads for the starting gate before the race. His jockey Royston Ffrench said, "We came over here to win but it wasn't to be. Even still, taking nothing away from the horse, he held his own." The Mark Johnston-trained son of Montjeu improved his record to 5 wins, 2 seconds, and 1 third in 12 starts, earning $1,059,815 for owner Alan D. Spence.

Right: Third place finisher Buccellati in the post parade. His jockey William Buick said, "I think if the ground comes up a little softer he can definitely find another gear. He's very tough and enjoys the mile and a half. He tries." The Andrew Balding-trained son of Soviet Star improved his record to 8 wins, 1 second, and 2 thirds in 24 starts, earning $669,812 for owners Peter and Jennifer McMahon and Rex and Wendy Gorrell. 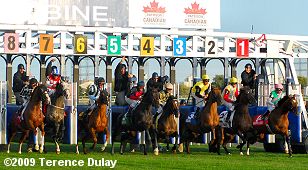 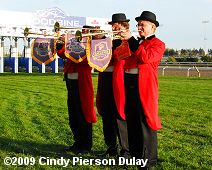 Left: The horses break from the gate for the 72nd running of the Canadian International.

Right: The Woodbine Bugle Boys call the horses to the post for the Canadian International.