The Canadian International was one of three Breeders' Cup Challenge "Win and You're In" races that were run on Saturday at Woodbine. The distaff counterpart to the International is the $1 million E.P. Taylor Stakes (G1) Presented by Emirates Airline, with a field of 8 older fillies and mares going 1 1/4 miles on the turf course looking for an automatic entry into the Breeders' Cup Filly and Mare Turf. Rainbow View was sent off as the 9-4 favorite exiting a 2 length score in the Matron Stakes at Leopardstown after finishing second in the Nassau at Glorious Goodwood, both Group 1 events. In to challenge the John Gosden trainee included 5-2 second choice Treat Gently, winner of an allowance event at Belmont Park in her first North American start after starting her career in France, and 3-1 third choice Look Here, a close second in the Arc Trial at Newbury against males last out.

Jockey Chantal Sutherland sent 22-1 Roses 'n' Wine to the front soon after the start, and she set slow early fractions of 26.21 and 50.50 while being stalked by Rainbow View and Treat Gently for the first 5/8 mile. Down the backstretch, Treat Gently took over the lead through 3/4 in 1:14.61 and 1 mile in 1:38.88. Entering the stretch, 44-1 longest shot Lahaleeb, who was 6th for 7 furlongs, came out wide for room to pass the tiring leader Treat Gently at the 3/16 pole, drawing clear through the final furlong to win going away by 1 3/4 lengths over favorite Rainbow View in 2:02.89 over the firm going. It was another 2 1/4 lengths back to 8-1 Princess Haya third. 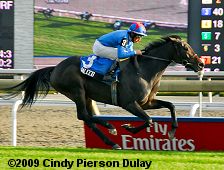 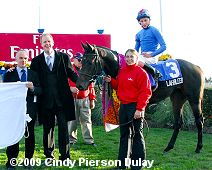 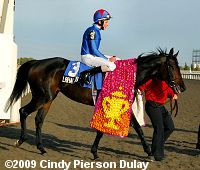 Left: Lahaleeb in the winner's circle.

Right: Lahaleeb parades with her flowers after the race. Her trainer Mick Channon said, "We kept it very simple.  We just did exactly what we did at home. We didn't do anything different. We didn't treat her with anything (Lahaleeb was the only horse in the field not racing on Lasix). She came very fresh. If you'd seen her in the paddock beforehand, she did throw a few bucks and kicks in.  We got it spot on. We can't believe it, especially for (owners) Mohammed Al Qatami and Khalid Al Mudhaf, who are watching in Kuwait. The Breeders' Cup would be a lovely thing, but, we do think she needs a little bit of a cut in the ground, which is why we came here really. So, we are not too sure really, It's a question of one race at a time." 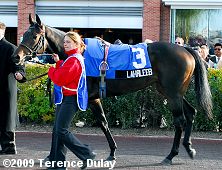 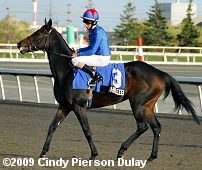 Left: Lahaleeb in the paddock before the race.

Right: Lahaleeb in the post parade. Her jockey William Buick said, "It's my first Group 1 win, so it's very special. She had to step over what she's done.  She'd had a long year back home but she was in top form. I rode her on this track only two days ago, and I knew she was in great form." 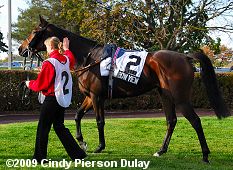 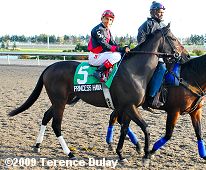 Left: Second place finisher and beaten favorite Rainbow View in the paddock before the race. The 9-4 favorite stalked the pacesetter early under new jockey Julien Leparoux, gained a short lead at the top of the stretch but was easily passed by the eventual winner, finishing 2nd beaten 1 3/4 lengths. The John Gosden-trained daughter of Dynaformer improved her record to 5 wins, 2 seconds, and 1 third in 11 starts, earning $937,205 for owner-breeder Augustin Stable.

Right: Third place finisher Princess Haya in the post parade. The 8-1 fifth choice raced in 7th early under jockey Rafael Bejarano as many as 8 1/2 lengths off the pace, then came out for room and rallied well late to get third, beaten 4 lengths at the line. The Michael Matz-trained daughter of Street Cry improved her record to 4 wins, 4 seconds, and 3 thirds in 14 starts, earning $428,631 for owner-breeder Eileen Hartis.


Kicking off the stakes action on Saturday was the $500,000 Nearctic Stakes (G2), a "Win and You're In" race for the Breeders' Cup Turf Sprint. A field of 11 older horses sprinted 6 furlongs on the firm turf, with local hope Jungle Wave sent off as the 2-1 choice on the board, exiting a 4th place finish in the Woodbine Mile last out after winning the Play The King Stakes. In to challenge him included 3-1 second choice Chamberlain Bridge, exiting a win in the Turf Monster Handicap at Philadelphia Park, and 6-1 third choice Field Commission, 6th in the Woodbine Mile after finishing second to Jungle Wave in the Play The King.

53-1 longest shot Silver Z was quickest out of the gate under jockey Robert Landry through an opening quarter mile in 22.45, before Chamberlain Bridge moved 1/2 a length in front on the outside through a half in 45.84. Chamberlain Bridge led to the 1/8 pole through 5/8 in 57.33, but he tired late setting the race up for the closers. Field Commission, who was as far back as 9th early, came through an opening at the 1/8 pole and gained the lead at the 1/16, drawing off to win by 1 1/2 lengths over 21-1 Bogue Chitto in 1:09.23. It was just a head back to late-running favorite Jungle Wave third. 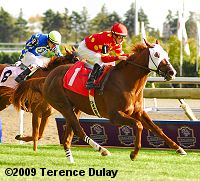 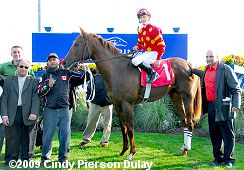 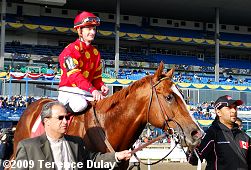 Right: Field Commission being led to the winner's circle. His jockey Julien Leparoux said, "The trainer told me to wait on the rail and be patient. I think he deserves (to go on to the Breeders' Cup Turf Sprint). We were in a very good position.  He was very relaxed on the rail.  I was able to get out and he finished well.  He's a nice horse.  He ran very big today." 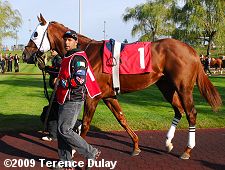 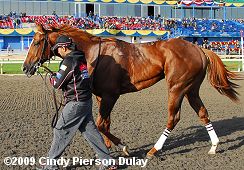 Left: Field Commission in the paddock before the race.

Right: Field Commission heads back to the barn after the race. His trainer and co-owner Dan Vella said, "(The Woodbine Mile) probably wasn't his best race of all time. Going a little shorter, he seems to have more of a kick. The one-hole, you don't really like it when you first get it, but we decided to use it to our advantage, try to save a little ground and rely on the jock to get him out when it was time." 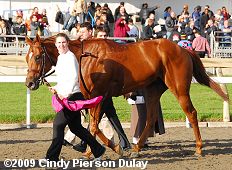 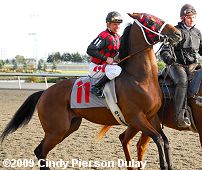 Left: Second place finisher Bogue Chitto heads back to the barn after the race. The 21-1 longshot stalked the pace 3 wide early under regular rider Gerry Olguin just 1 1/2 lengths off the pace in 4th, then put in a strong drive late to get second money beaten 1 1/2 lengths. The Ian Howard-trained son of Crafty Prospector improved his record to 4 wins, 5 seconds, and 1 third in 10 starts, earning $286,363 for owner-breeder Luis de Hechavarria.

Right: Third place finisher and beaten favorite Jungle Wave acts up in the post parade. The 2-1 favorite raced in midpack 6th about 2 lengths off the lead under regular rider Todd Kabel, came out 6 wide into the lane but failed to sustain a rally late, finishing third beaten 1 1/2 lengths, just a head back of second money. The Sid Attard-trained son of Hold That Tiger improved his record to 7 wins, 1 second, and 2 thirds in 13 starts, earning $494,176 for owner Tucci Stables.