The $2 million Pattison Canadian International (G1) at Woodbine Racetrack in Toronto is the richest horse race in Canada. Celebrating its 71st renewal this year, this 1 1/2 mile trip around the E.P. Taylor Turf Course attracts top turf horses from North America and Europe, and for the first time, the International is part of the Breeders' Cup Challenge "Win and You're In" promotion, with the winner earning a spot in the Breeders' Cup Turf field at Santa Anita in 3 weeks' time. Racing conditions were ideal given the time of year, with an officially "firm" turf course, mostly cloudy skies, a light breeze, and temperatures in the high 50's. A field of 10 older horses were entered, with Doctor Dino sent off as the 7-5 favorite exiting a runner-up finish in the Grand Prix de Deauville in France. In to challenge the Richard Gibson trainee include 7-2 second choice Champs Elysees, winner of the Northern Dancer Turf, the main local prep for the International, and 4-1 third choice Quijano, who finished second in the Northern Dancer.

When the gate opened, jockey Jimmy Fortune sent 8-1 fourth choice Lucarno to the lead, and he opened up a 3 length advantage on the clubhouse turn getting the initial quarter mile in 24.91. Jockey Richard Dos Ramos aboard 12-1 Marlang joined Lucarno entering the backstretch and the pair battled for the lead through fractions of 50.63, 1:15.61, 1:40.10, and 2:04.60, with 30-1 Marsh Side stalking them in third the whole way. The pace duel took its toll on both as they tired badly entering the stretch to eventually finish well back. Jockey Javier Castellano aboard Marsh Side, who had saved ground on the rail the whole way, passed the tiring pacesetters at the 3/16 pole and opened up a 1 1/2 length advantage in mid stretch. 39-1 Spice Route, as far back as ninth early, closed with a rush down the center of the course but was left with too much ground to make up, as Marsh Side cruised under the line 1 3/4 lengths in front in a time of 2:28.73. It was just a neck back to another closer, Champs Elysees third. Favorite Doctor Dino rated in last early, came seven wide into the stretch to pass tiring runners but could only manage a fifth place finish. 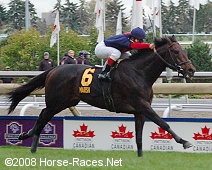 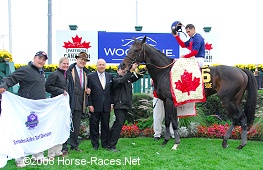 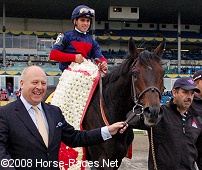 Left: Marsh Side in the winner's circle. Winnin trainer Neil Drysdale said of the horse's poor performances earlier in the year, "We looked at his form and said, 'Look, this horse loves Canada so let's just take him back to where he belongs,' and that's how it happened. I thought his Northern Dancer run tipped his hand. Obviously, tactically we changed things around a bit. We had him up closer today. In the Northern Dancer he sort of got sucked back into last going into the first turn. Today, he broke well and was able to get position straight away."

Right: Patrick Lawley-Wakelin, racing manager for owner Robert Evans, leads Marsh Side and Javier Castellano to the winner's circle. When asked about if he will enter in the Breeders' Cup Turf, Lawley-Wakelin said, "Obviously we will take a look at it. (Marsh Side) has lived in California for almost 11 months now and has acclimated very well. The ground here is totally different to what he's going to get in California. However he has trained on it and has trained on it very well." 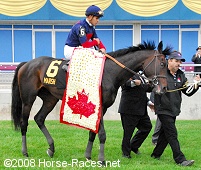 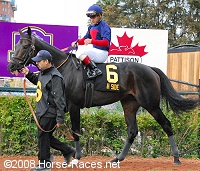 Left: Marsh Side parades with his flower blanket.

Right: Marsh Side in the paddock before the race. Winning jockey Javier Castellano said, "That's the first time I rode the horse. But I had been watching him in his last couple of races. He was up near the pace all the way and that's a long way to go, a mile and a half. Every time I asked him at the top of the stretch, he responded. Frankie Dettori won the E.P. Taylor coming through inside on the rail and (Folk Opera) never got tired and kept going. Turning for home I kept dropping my horse inside on the rail and tried to keep riding and the horse responded very well." 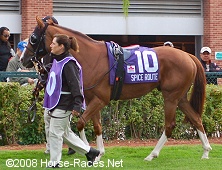 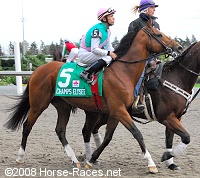 Left: Second place finsher Spice Route in the paddock before the race. His jockey Jim McAleney said, "Kudos and hats off to Roger (Attfield, trainer).Like I said before the race, he didn't stumble into the Hall of Fame. I was really excited at the 3/16 pole. I'm watching Marsh Side and he looks like the horse to beat and I felt like we had enough horse to catch him. The winner ran a brilliant race but my horse did, too."

Right: Third place finisher Champs Elysees in the post parade. The 7-2 second choice was unhurried at the back of the field for the first 10 furlongs under regular rider Garrett Gomez, then came out wide into the stretch for an impressive rally from dead last at the 1/4 pole to get third, beaten 2 lengths at the line. The Bobby Frankel trainee improved his record to 4 wins, 6 seconds, and 5 thirds in 19 starts, earning $1,248,147 for owner-breeder Juddmonte Farms. 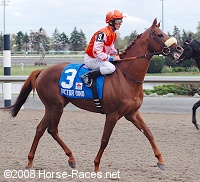 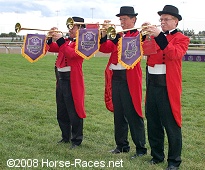 Left: Fifth place finisher and beaten favorite Doctor Dino in the post parade. The 7-5 favorite was well back early under new jockey Frankie Dettori, passed tiring horses on the turn, then unleashed a 7-wide rally through the stretch to get fifth place, beaten just 4 lengths. The Richard Gibson-trained son of Muhtathir has a record of 8 wins, 5 seconds, and 8 thirds in 27 starts, earning $2,816,980 for owner Javier Martinez Salmean.

Right: The Woodbine Bugle Boys perform the call to the post.