The $500,000 Nearctic Stakes (G2) is a 6 furlong turf sprint for older horses looking to gain entry into the new Breeders' Cup Turf Sprint. Hellvelyn, third in the Quick Call Stakes at Saratoga last time out, was sent off as the 2-1 favorite in the field of 12 over 3-1 second choice Heros Reward, winner of this race last year but second in the Turf Monster at Philadelphia last out, and 7-1 third choice Just Rushing, the main local hope, winner of the Play the King before finishing third in the Woodbine Mile.

11-1 Starticus battled for the lead with 8-1 True to Tradition down the backstretch and around the turn, getting the quarter in 22.63 and the half in 44.99. Starticus stubbornly lead the lead to mid stretch, getting 5/8 in 56.43, with 52-1 longshot Rouse the Cat, steadily closing on the leaders. In the final yards, True To Tradition dug in to prevail by just a nose over Rouse the Cat, who in turn was just 3/4 length ahead of pacesetter Starticus. The running time was 1:09.11 over the firm course. Favorite Hellvelyn raced in 6th early but could not improve position through the stretch and finished 6th beaten just 2 3/4 lengths. 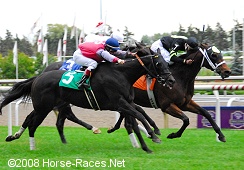 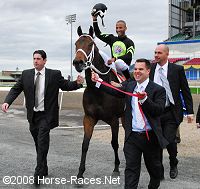 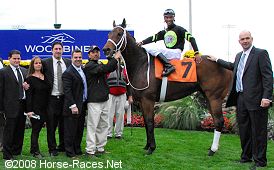 Left: True to Tradition is led to the winner's circle by his happy connections.

Right: True to Tradition in the winner's circle with trainer Scott Lake by his hip. Lake said, We got him up here on Wednesday morning and he settled in good. He was happy and ready to go. When he ran in Maryland and got beat a head by (Heros Reward), he kind of hung a little bit at the end, so we decided to put the blinkers on him and he's just really responded to it and he's been very focused since then. We're very excited about the Breeders' Cup. I've been dying to get back there." 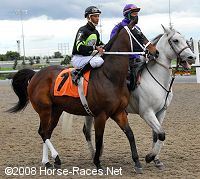 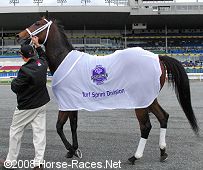 Left: True to Tradition in the post parade. Winning jockey Kendrick Carmouche said, "I just know that you have to sit a little longer with the long stretch here. Scott Lake just told me to ride him the way he wanted to go and I just broke and let him sit nice and comfortable. When I asked him he responded."

Right: True to Tradition heads back to the barn with his new winner's blanket. Winning owner Ben Mondello said, "This is my biggest win as an owner. My feet won't hit the ground until we hit Santa Anita. California here we come. We book the ticket tomorrow." 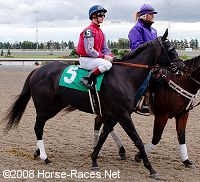 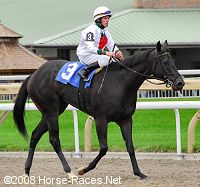 Left: Second place finisher Rouse the Cat in the post parade. The 52-1 second-longest shot on the board saved ground on the rail in fourth just 2 lengths off the pace under regular rider Chris Van Hassel, then rallied well, just missing by a nose. The Ollie Figgins trainee improved his record to 7 wins, 2 seconds, and 3 thirds in 16 starts, earning $281,300 for owner Ray M. Pennington III. 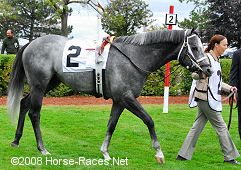 Sixth place finisher and beaten favorite Hellvelyn in the paddock before the race. The 2-1 favorite raced in midpack about 4 lengths off the lead early under new jockey Joe Bravo, put in a mild rally early in the stretch but evened out late to finish 6th beaten 2 3/4 lengths at the line. The Kiaran McLaughlin trainee has a record of 3 wins, 1 second, and 1 third in 10 starts, earning $241,847 for owner Zabeel Racing International.

Kicking off the stakes action on Canadian International day was the $300,000 Summer Stakes (G3) for 2-year-olds going 1 mile on the turf, looking for entry in the Breeders' Cup Juvenile Turf. Local hope Utterly Cool, undefeated in his two career starts, both on the turf, was the 9-10 favorite over 3-1 second choice Skipadate, second in the With Anticipation at Saratoga last out, and 7-2 third choice Jess Not Jesse, winner of his debut on the Saratoga turf last time out.

Regular rider David Clark sent 18-1 Win And Reign to the front immediately and he set fractions of 23.50, 47.30, and 1:11.71 over the firm course while being stalked by Jess Not Jesse a length behind and to his outside. Entering the stretch, the pacesetters tired setting the race up for the closers. 8-1 Grand Adventure, 5th early, came into the lane 7 wide, and despite jockey Eurico Rosa da Silva losing his whip at the 1/8 pole, prevailed under a strong drive, holding off late-running Skipadate by a head in 1:35.86. It was a long 5 lengths back to 38-1 Star of David third, who in turn was 4 1/4 lengths in front of favorite Utterly Cool in fourth. 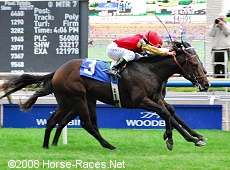 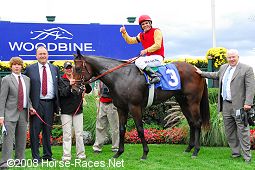 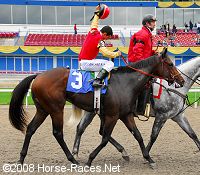 Left: Grand Adventure in the winner's circle with trainer Mark Frostad at his hip. Frostad said, "He's very good mind-wise and he's been training very well. We got a couple of good works into him. He was happy to see the wire today, but he'll get a lot out of this race today. We bought this guy from the Fasig-Tipton Sale in July and he's turned into a very nice horse. We really like him." Asked about going to the Breeders' Cup, he added, "Absolutely. If he comes out of the race in good shape, sure."

Right: Grand Adventure parades for the fans after the race. 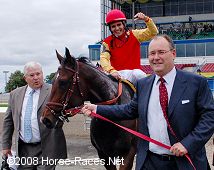 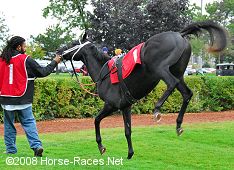 Left: Trainer Mark Frostad and Rick Balaz lead Grand Adventure to the winner's circle while jockey Eurico Rosa Da Silva celebrates. Da Silva said, "He was very relaxed where he was and when I asked him he gave me a big kick, just like he did in his first race."

Right: Second place finisher Skipadate kicks up his heels in the paddock before the race. He kicked like this every time he reached this spot while circling. The 3-1 second choice raced about 5 lengths off the pace early under new jockey Patrick Husbands, closed two wide into the stretch, briefly took the lead at the 3/16 pole but still finished well when headed by the winner. The Mark Casse trainee improved his record to 1 win, 2 seconds, and 0 thirds in 3 starts, earning $101,680 for owner Heiligbrodt Racing Stable. 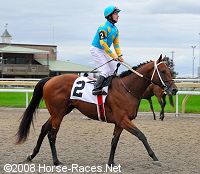 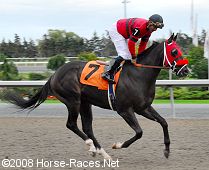 Left: Third place finisher Star of David returns after the race. The 38-1 second-longest shot on the board stalked the pace in fourth early under jockey Jim McAleney, then put in his bid at the 1/4 pole but failed to sustain his drive, finishing third beaten 5 lengths. The Steve Asmussen trainee improved his record to 1 win, 0 seconds, and 2 thirds in 4 starts, earning $68,154 for owner Zayat Stables LLC.

Right: Fourth place finisher and beaten favorite Utterly Cool in the post parade. The 9-10 favorite was close to the pace most of the way under regular jockey Richard Dos Ramos, closed three-wide on the turn and came out 6 wide in the stretch, but evened out through the stretch to finish fourth beaten 9 1/4 lengths. The Sid Attard trainee has a record of 2 wins in 3 starts, earning $112,140 for owner Jim Dandy Stable.