There were 2 other graded stakes races contested on Woodbine Mile day. The $750,000 Northern Dancer Turf - Presented by VTech (G1) was run in late July during its first three editions, but this year was moved to September, setting it up as the major local prep for the $2 million Canadian International. A field of nine older horses went one full lap of the 1 1/2 mile E.P. Taylor Turf Course, with German invader Quijano sent off as the 2-1 favorite. Third in the Canadian International over this same course and distance last year, he is exiting a runner-up finish in the Deutchland Preis after winning the Gran Premio di Milano. In to challenge the Peter Shiergen trainee include 3-1 second choice Better Talk Now, winner of the 2004 Breeders' Cup Turf and exiting a runner-up finish in the Sword Dancer at Saratoga, and 7-2 third choice Champs Elysees, sixth in his last 2 starts, the United Nations at Monmouth and the Charlie Whittingham at Hollywood.

16-1 Cloudy's Knight went to the lead immediately under new jockey Emile Ramsammy, and set a slow pace of 25.46, 52.09, 1:17.86, and 1:43.24 over the yielding turf while being stalked by 23-1 French Beret to his outside. On the far turn, Cloudy's Knight tired badly to eventually finish seventh, allowing French Beret to take over the lead at the top of the lane, getting 10 furlongs in 2:07.80. However, he too would tire from the pace battle up front. Top local hope, 6-1 Seaside Retreat, who stalked the pace in fourth early, came out three wide for the drive and took over the lead at the 1/8 pole. Favorite Quijano, who stalked the pace in third, came on late to get the lead at the 1/16 pole, but Champs Elysees, seventh early, closed with a rush on the outside to prevail in a photo finish, completing the 1 1/2 mile journey in 2:32.02. It was just 1/2 a length back to Seaside Retreat third. 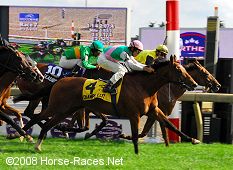 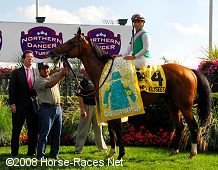 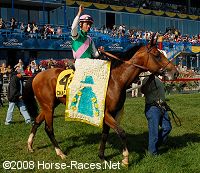 Left: Champs Elysees in the winner's circle with Lord Grimthorpe, racing manager for winner owner-breeder Juddmonte Farms, on the left. Lord Grimthorpe said, "I don't see why not (run back in the Canadian International). Obviously, Bobby (Frankel, trainer) will want to see how he comes out of the race (first) but he goes well on this turf course." 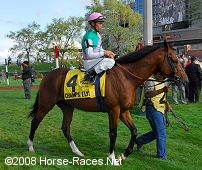 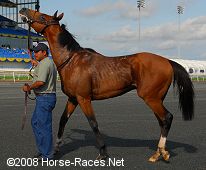 Left: Champs Elysees in the paddock before the race. Winning jockey Garrett Gomez said, "We were out on it (the turf) a little while ago and it (the turf) was on the soft to yielding side. But this horse, coming from over in Europe, he'd been on something like this, so I knew it wouldn't bother him too much. It was just a matter of time, get a good trip with him and get him traveling well."

Right: Champs Elysees heads to the barn after the race. 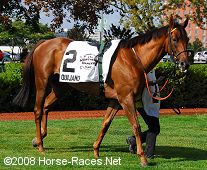 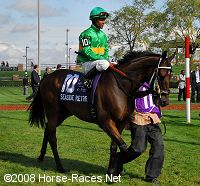 Left: Second place finisher and beaten favorite Quijano in the paddock. The 2-1 favorite stalked the pace in third along the hedge the whole way under regular rider Andrasch Starke, took over the lead late in the stretch but was just beaten at the line. The Peter Schiergen trainee improved his record to 13 wins, 3 seconds, and 1 third in 23 starts, earning $1,920,264 for owner-breeder Stiftung Gestut Fahrof.

Right: Third place finisher Seaside Retreat after riders up. The 6-1 fourth choice stalked the pace three wide in fourth early under regular rider Patrick Husbands, split horses at the top of the lane, but was outfinished late. The Mark Casse trainee improved his record to 7 wins, 3 seconds, and 3 thirds in 28 starts, earning $689,925 for owner and co-breeder William S. Farish Jr. 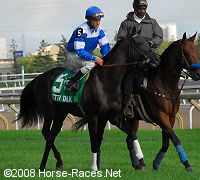 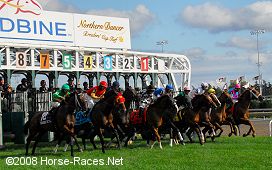 Left: 7th place finisher and winner of the 2004 Breeders' Cup Turf Better Talk Now behind the starting gate before the race. The 3-1 second choice raced at the back of the field early under regular rider Ramon Dominguez, came out for the drive but did not quicken, passing tiring horses late to finish 7th beaten 5 1/4 lengths. The H. Graham Motion trainee has a career record of 14 wins, 7 seconds, and 4 thirds in 47 starts, earning $4,235,624 for owner Bushwood Stables.

Right: The field breaks from the gate for the Northern Dancer Turf (G1). 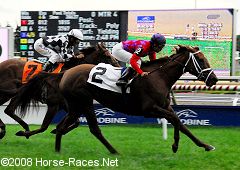 The first stakes race on Woodbine Mile day is the $300,000 Canadian Stakes (G2), a 1 1/8 mile trip on the turf for older fillies and mares. A field of eleven went to post here, with Diana Stakes winner Forever Together sent off as the 4-5 favorite over 6-1 second choice and local hope Sealy Hill, winner of the 2007 Canadian Triple Tiara exiting an allowance win last time out. 7-1 J'ray, winner of the Matchmaker at Monmouth last out, completed the top three on the toteboard.

68-1 longest shot Stroke the Tiger battled on the pace with 12-1 Quiet Jungle and 13-1 The Niagara Queen through fractions of 25.24, 49.83, and 1:14.05 over the yielding course. Through the stretch, the pace collapsed, setting the race up for the closers. 16-1 Callwood Dancer, who was fifth early, took over the lead at the 1/8 pole after a mile n 1:38.86, but J'ray, who was at the back of the field after 6 furlongs, came out three wide for the drive and closed with a rush, taking over at the 70 yard pole and drawing off to a 1 length victory in 1:51.86. It was another 2 lengths back from Callwood Dancer to late-running favorite Forever Together third.
Results Chart 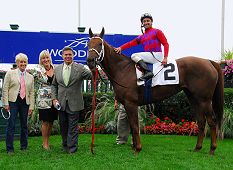 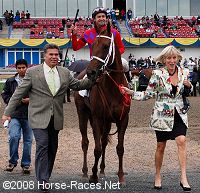 Left: J'Ray in the winner's circle with Ginny DePasquale, assistant to winning trainer Todd Pletcher, on the far left. DePasquale said, "This filly gives 110 per cent every time she runs. I knew she was going to run well. Joe gave her the perfect trip. She relaxed nicely on the backside. At first, I thought she was a little bit far back. She likes to be a little bit closer, but it worked out absolutely perfectly." 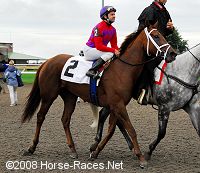 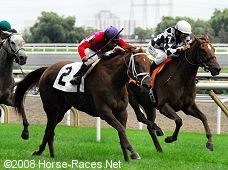 Left: J'Ray returns after the race. Her jockey Joe Bravo said, "I'd say this filly has really got good. This little filly relaxed back there. She saved all her energy until the turn for home. She exploded and really showed her true colors." 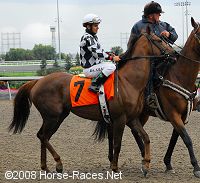 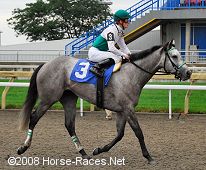 Left: Second place finisher Callwood Dancer in the post parade. The 16-1 shot raced in fourth early while off the rail under regular rider Eurico Rosa da Silva, took over the lead in midstretch but failed to hold off the winner. The Roger Attfield trainee improved her record to 6 wins, 2 seconds, and 5 thirds in 17 starts, earning $516,449 for owner Harlequin Ranches.

Right: Third place finisher and beaten favorite Forever Together returns after the race. The 4-5 favorite raced off the pace near the back of the field early under jockey Julien Leparoux, was asked at the top of the lane and launched a good rally but tired late to finish third beaten 3 lengths. The Jonathan Sheppard trainee improved her record to 5 wins, 1 second, and 3 thirds in 12 starts, earning $608,300 for owner Augustin Stable.