The $1 million Woodbine Mile (G1) is one of the most prestigious races in Canada. This 1 mile trip over the E.P. Taylor Turf Course at Woodbine Racetrack in Toronto is a key prep for the Breeders' Cup Mile, and this year is part of the Breeders' Cup Challenge "Win and You're In" program, with the winner earning a spot in the Mile field. Rains overnight and during the first half of the card rendered the course yielding, but the clouds lifted after the fifth race allowing for sunny weather for the two Grade 1 events on the card.

As expected, 2007 Breeders' Cup Mile winner Kip Deville, who was second in this race last year, was sent off as the prohibitive 1-2 favorite in the field of eight. The Oklahoma-bred came to Woodbine off three straight victories, in the BC Mile at Monmouth, the Maker's Mark Mile at Keeneland, and the Poker Handicap at Belmont. In to challenge him included 5-2 second choice Ventura, a 4-year-old filly coming off a nose defeat in the CashCall Mile at Hollywood and a win in the Just A Game at Belmont, and 13-1 third choice and local hope Rahy's Attorney, exiting a fourth place finish in the Nijinsky Stakes and winless since the Connaught Cup in May.

16-1 Just Rushing broke alertly and was joined by Kip Deville to his outside as the pair battled through a quarter in 24.47 and a half in 48.25, with 23-1 Ice Bear and Rahy's Attorney stalking them in third and fourth respectively. Turning for home, jockey Slade Callaghan moved Rahy's Attorney off the rail for room and made his move for the lead, opening up a 1 1/2 length advantage over Kip Deville at the 1/4 pole, getting 6 furlongs in a quick 1:11.93. Through the stretch, Kip Deville tired, while Ventura, who raced back in sixth early, came out wide for the drive and rallied well, but had too much ground to make up. Rahy's Attorney cruised under the line 1 1/4 lengths in front, completing the trip in 1:36.14. It was another 1 3/4 lengths back to pacesetter Just Rushing third, while favorite Kip Deville tired late to finish fifth beaten 5 lengths. The final time was the second slowest winning time in Woodbine Mile history, with only the inaugural running in 1997 run slower (1:36.20 by Geri). 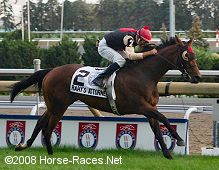 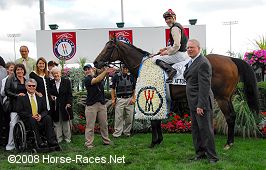 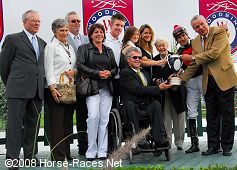 Left: Winning co-owner Jim MacLellan said, "When we bred (Rahy's Attorney), our goal was to make the cut at Woodbine. We wanted to stay here with our horses, that's all. We never dreamed of something like this. It's just unbelievable. We've got a guardian angel, my father, watching over us. It's been an unbelievable ride." Rahy's Attorney, the fourth Ontario-bred to win the Woodbine Mile, will require a 9% supplement ($180,000) in order to enter the $2 million Breeders' Cup Mile. When asked about entering the Breeders' Cup given the supplement, MacLellan added, "We'll have to talk to the trainer. I'm not going to make that call right now. We'd love to be there. He showed that he belongs. We'll talk with Ian and see where he belongs."

Right: The trophy presentation for the Woodbine Mile with trainer Ian Black on the far left and Woodbine CEO Dave Willmot on the far right. 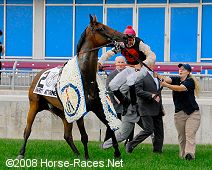 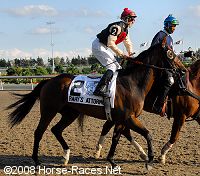 Left: Rahy's Attorney got a bit spooked by the cheers of the fans and jockey Slade Callaghan had to jump off for a minute before they could start parading again.

Right: Rahy's Attorney in the post parade. Winning trainer Ian Black said, "I think he must be (a miler). I was trying to make him something else. Well, I was always happy where he was. He heeled up so much, he ran huge down the lane. I thought he went too soon when he turned for home, but it turned out to be a great ride. Unfortunately he's not a Breeders' Cup (eligible) horse, which makes it very prohibitive. Kip Deville and the filly (Ventura) are very good horses, so I was hoping we could at least get a piece (of the purse)." 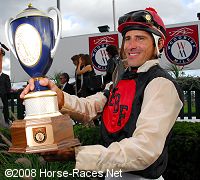 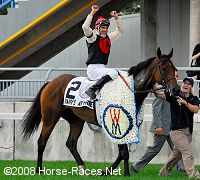 Left: Winning jockey Slade Callaghan celebrates as they parade for the fans.

Right: Callaghan with the Woodbine Mile Trophy. He said, "I was just off the pace going around the turn. I knew my horse could last the distance. So I made an early move with him. To be honest, I wanted to be right on the fence. I had to swing him out a little bit to get by Just Rushing, then back to the rail. This horse loves the rail. This is a tremendous effort against Kip Deville. I thought (Kip Deville) was heads and tails above the rest of the field in here. But my horse had home advantage." 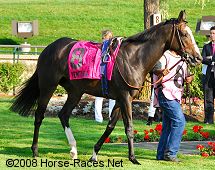 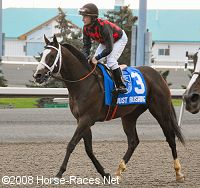 Left: Second place finisher Ventura in the paddock before the race. The daughter of Chester House rated off the pace in sixth early under regular rider Garrett Gomez, came out three wide for the drive and was all out through the lane but could not catch the winner. The Bobby Frankel trainee improved her record to 6 wins, 5 seconds, and 1 third in 14 starts, earning $831,235 for owner-breeder Juddmonte Farms.

Right: Third place finisher Just Rushing returns after the race. His jockey Jim McAleney said, "He ran a great race. I thought we had a nice controlled pace. He ran his eyeballs out. In the stretch he dug in and kept on fighting. We were along the hedge which was a great spot to be. He was beautiful today." 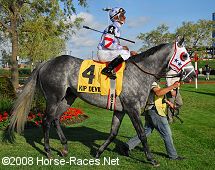 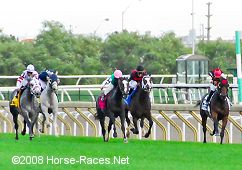 Right: Fifth place finisher and beaten favorite Kip Deville in the paddock. His trainer Richard Dutrow Jr. said, "It was disappointing. I don't know. Maybe he didn't like (the yielding course). I'm not going to cry and complain about it. He's using run good on soft courses. I don't know if he didn't like the grass or not today. We can't explain anything why he didn't fire. He had everything go his way. I didn't see him go to the lead. He just broke so good and let the other horses come up on the inside of him. That was OK. I'll try to figure out what his excuse is, as I'm sure he's got one."

Left: Near the top of the stretch with Rahy's Attorney out front, Just Rushing second in the center, Kip Deville third on the outside, and Ventura fourth behind Just Rushing starting her run, and fourth place finisher Ice Bear behind them. Kip Deville's jockey Cornelio Velasquez said, "He broke good. He did not try today. He wasn't running today. Whether or not he didn't like the track, I don't know. The position was fine."