The $1 million Woodbine Mile Presented by Bell (G1) is the September feature event at Woodbine Racetrack. A field of fourteen older horses entered the gate in this 1 mile trip around 1 turn of the E.P. Taylor Turf Course, under cool but sunny conditions in the Toronto area. Dell Ridge Farm homebred Shakespeare was sent off as the 2-1 favorite, coming off an allowance victory at Saratoga after a 21-month layoff due to an injury suffered in the 2005 Breeders' Cup Turf. In to challenge the Kiaran McLaughlin trainee were 5-1 second choice Remarkable News, a Venezuelan-bred coming into the Mile off two straight Grade 2 victories, the Dixie at Pimlico and then the Firecracker at Churchill Downs, and 6-1 third choice Kip Deville, trained by Richard Dutrow Jr., who was third in the Oceanport at Monmouth Park last time out.

When the gate opened, jockey Ramon Dominguez sent Remarkable News to the lead and he was stalked by 26-1 Le Cinquieme Essai and Kip Deville through an opening quarter of 23.82. Garrett Gomez aboard Shakespeare was in no hurry for the long backstretch run, as he angled the favorite over to the hedge to save ground over the firmer part of the course, racing in ninth. Remarkable News continued to lead down the backstretch, as 21-1 Galantas moved up to join the pace battle through a half in 46.71, and the pair battled on the pace around the turn through 3/4 in 1:09.98. At the top of the stretch, Kip Deville, who had stalked the pace the whole way, angled out for running room and when asked by jockey Cornelio Velasquez, surged past Remarkable News to take the lead a furlong out. However, Shakespeare, who hugged the inside hedge and rail the whole way, had moved up on the field and was fourth at the 3/16 pole. Switching leads, Shakespeare found another gear and ran right by Kip Deville with 1/16 of a mile to go, and finishing 1 length clear in a time of 1:33.58 over the firm turf course. It was another 1 1/2 lengths back to Galantas in third, a neck ahead of pacesetter Remarkable News in fourth. 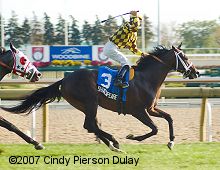 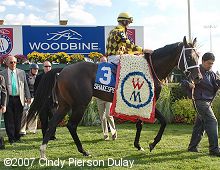 Shakespeare in the winner's circle. He was a bit excited and did not want to settle down and pose nicely. Art Magnuson, assistant to trainer Kiaran McLaughlin said, "He is a very classy horse. We are very lucky to have him in the barn. He is very special. We could tell early that he was very special. (Owner) Mr. Justice gets all the credit for all the time off and bringing him back slowly and it paid off. I would say that he went into this race about the same as Saratoga. He always trains well. We thought he ran well the first time out. We were surprised he ran as well as he did and he made us seem more confident coming into today." 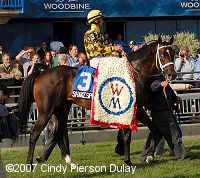 Shakespeare parades for the fans after the race. His jockey Garrett Gomez said, "He actually showed me a little more speed earlier on in the race then I expected to him. When he was showing it to me, I let him to show it. A couple (of horses) gave me a little coverage and as the race progressed, he was there for me. When I turned for home, I was hoping be able find a way through there, Becrux came off the fence a little bit and gave me a chance to get on through there. Once he had seen the daylight, he hit overdrive for us, he got us home. He ran a really good race, I thought the mile might be a little too short for him, but he proved me wrong, he is a very talented horse." 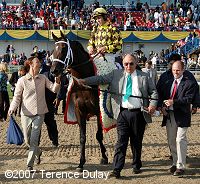 Owner Frank Justice of Dell Ridge Farm (green tie) leads Shakespeare to the winner's circle. Justice said, "Never had a horse this good before. He is just a fantastic horse. We had him off a year and nine months. We always thought about bringing him back. He just has a presence about him that you'd like to see him race. I was watching the horses and I didn't know where he was really. But when I saw him coming down the rail, I knew he was going to win. It was a tremendous ride. I've never seen anybody ride a horse that good." 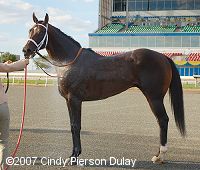 Shakespeare strikes a pose while being hosed down after the race. Jockey Garrett Gomez said, "Congratulations to Kiaran McLaughlin. He did a tremendous job on this horse bringing him back. He is just a beautiful animal and I glad to be part of it. He's a talented horse and talented horses make you look good." 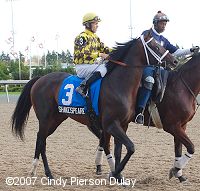 Shakespeare in the post parade. Garrett Gomez won the 1991 E.P. Taylor Stakes at Woodbine aboard Lady Shirl, Shakespeare's dam. He added, "The first time I rode him, I didn't realize that's the way he was bred. It was kind of neat because she wasn't very big and to see what she threw is just unbelievable. She was very, very talented and so is he." 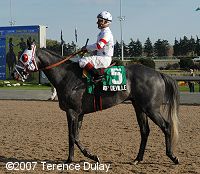 Second place finisher Kip Deville returns after the race. 6-1 third choice Kip Deville stalked the pace from the 2 path under jockey Cornelio Velasquez,, gained the lead at the 1/16 pole, but was no match for the late charge of Shakespeare. The Richard Dutrow trainee improved his record to 8 wins, 3 seconds, and 2 thirds with earnings of $1,014,222 for owners IEAH Stables. 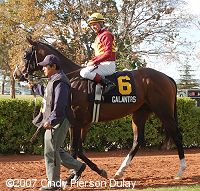 Third place finisher Galantas in the paddock before the race. Jockey Todd Kabel said, "I had my horse nice and settled at one point, then he got rank and just took off with me. That cost us a chance of getting the big piece of the pie. He wasn't giving up. He ran a tremendous race. My hat goes off to (trainer) Graham Motion and (owner) Earle Mack for bringing him up here. This was a big race today and he showed up."