The $700,000 Northern Dancer Breeders' Cup Turf (G2) at Woodbine, contested at 1 1/2 miles on the E.P. Taylor Turf Course, is one of the newest additions to the Toronto oval's rich stakes schedule, and is an early prep for the Canadian International (G1) run in October. A field of eight older horses went to post with defending champion Sky Conqueror sent off as the 5-4 favorite coming off a second in the King Edward and a win in the Woodford Reserve Turf Classic on the Kentucky Derby undercard. In to challenge him were 5-2 second choice Jambalaya, winner of the Gulfstream Park Breeders' Cup and the Pan American Handicap both at Gulfstream, but third in the King Edward last out, and 3-1 third choice Obrigado, shipping in from California for trainer Neil Drysdale off a third place finish in the Charlie Whittingham at Hollywood Park.

16-1 longshot French Beret led the field around the clubhouse turn and partway down the backstretch, and set a slow pace of 25.45, 50.75, and 1:14.79 while as many as 1 1/2 lengths clear of 28-1 Last Answer, who in turn was 2 lengths clear of the balance of the field. Nearing the end of the backstretch run, Last Answer took over the lead through a mile in 1:38.68, as French Beret faded to eventually finish last. Last Answer pulled away to a 1 1/2 length lead at the top of the stretch, getting 1 1/4 miles in 2:03.04, but the closers were making headway. Favorite Sky Conqueror, who had raced off the pace in sixth under patient handling by new jockey Edgar Prado, came out wide entering the lane and closed strongly down the center of the course, taking over the lead with a furlong to go. Through the final 1/8 of a mile Sky Conqueror pulled away to win by 1 1/2 lengths at the line over 12-1 Marsh Side who had stalked the pacesetters the whole way in third and rallied well to get second money. The running time was a respectable 2:27.45 over the firm going, and it was just 1/2 a length back to Jambalaya in third. Last Answer faded to fourth while Obrigado was fifth. 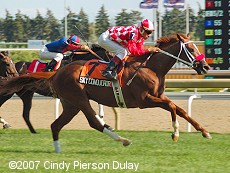 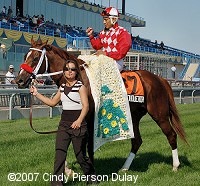 Sky Conqueror parades for the fans after the race. His jockey Edgar Prado said, "He knows the course; I was a very lucky passenger the whole way around. He broke running out of the gate, I saw a couple for horses go on early, so I was letting him do his own thing, he was very happy in the back of the pack, but every time, I asked him for something, he responded right away. That gave me a great feeling. I didn't have to hit him today, I kind of showed him the stick in the stretch, and he took off." 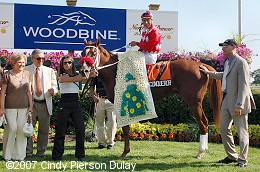 Sky Conqueror in the winner's circle. His trainer Darwin Banach (far right) said, "I was happy to see him sitting just a little bit closer, he made a nice move, he got to the front, and once he made front, I was pretty happy where we were at early. It was not quite heart skipping time. There is nothing like it, it is what racing all about, to have your horse make a move like that, and to try to get the time, it is what it is all about." Banach said he could go next in either the Sword Dancer at Saratoga or the Arlington Million at Arlington Park. 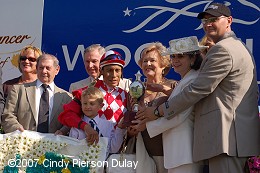 The trophy presentation with Northern Dancer's jockey Bill Hartack on the far left and Noreen Taylor, vice-president of Windfields Farm which raced and stood Northern Dancer at stud, in the white hat. His owner and breeder William Sorokolit said, "It always makes me nervous to be the favorite. You have all the pressure on you, he came through. He is a very honest horse, the best I ever had. I just liked the idea he laid a little closer today. But, a little nervous that the Jockey was not very familiar with him, but, that worked out well, he ran a hell of a race. The nick of Mr. Prospector and Northern Dancer really seemed to work, that was my motivation. The mare was just kind of an ordinary mare, was nothing special. But, her half sister Ballerina Queen was a special one, but, we lost her very early in her career." 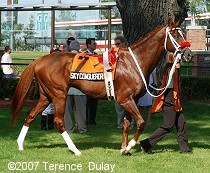 Sky Conqueror in the paddock. His jockey Edgar Prado said, "I would love to stay on, as long as I can. I hope that he stays healthy. I watched the DVD of his races and they told me that he is nice horse and that he has a nice kick in the stretch and that's exactly what he did. I stayed at the back of the pack and bided my time and when I asked him, he kicked in strong." 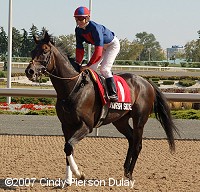 Second place finisher Marsh Side returns after the race. His jockey Emma-Jayne Wilson said, "He ran a great little race, everything played out the way we wanted it. We had a nice stalking trip; he is endless, a bit of a bottomless pit, in terms of pace. He won the Valedictory, it is too bad we didn't have a couple of more furlongs, I believe we would have had him. I walked the turf course this morning, I spoke to Mr. Dickinson by phone, that was our plan based on the assessment we had, the rail is in beautiful shape, the turf course is in great condition, we were out there walking with the maintenance guys to make sure that all was copasetic, it was a great race, it all turned out very well. Sky Conqueror is a really nice horse. He is a very big horse, he was about this size when he was three, he is only four against these top turf horses. I mean is just starting to mature." 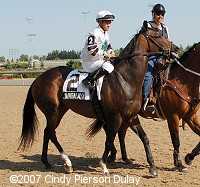 Third place finisher Jambalaya in the post parade. His jockey Javier Castellano said, "I had a beautiful trip. I really liked our trip. There was a pretty good pace. He settled down beautifully. Turning for home, he really tried hard and gave me everything he had. I give a lot of credit to (Sky Conqueror). He showed up today. We can compete against each other. They're two really nice horses. They can beat each other all of the time." 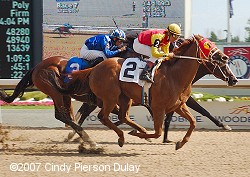 Earlier in the card, a field of six older sprinters took to the main Polytrack in the $125,000 Bold Venture Stakes at 6 1/2 furlongs. 5-2 second choice Gangster sat at the back of the field for the first half mile, well off the quick pace of 45.44 set by 8-5 favorite Just Rushing. Through the stretch, Gangster closed three wide to just get up by a neck in 1:16.02. It was another neck back from Just Rushing to 5-1 fourth choice Museeb in third.
Results Chart

Winning trainer Sid Attard, who trains both Gangster and runner-up Just Rushing, said, "I want both to win for both owners I hate to run two horses together because I want both to win. (Gangster) always tries. He deserved to win a stake." Jockey Todd Kabel added, "I had a lot of horse underneath me, I was comfortable. I know this horse always shows up with a big run down the lane and it was just a matter if they were going to stop or not."