The distaff counterpart to the Northern Dancer Breeders' Cup Turf at Woodbine is the $300,000 Dance Smartly Stakes (G2) for older fillies and mares going "about" 1 1/8 miles around one turn of the E.P. Taylor Turf Course. Just six entered, with reigning Canadian Horse of the Year Arravale sent off as the 4-5 favorite, making her first start of the year, having been unraced since winning the E.P. Taylor Stakes last October. In to challenge her was 2-1 second choice Masseuse, shipping in from Belmont Park for trainer James Toner off a second place finish in the New York Handicap at Belmont and a win in the Beaugay at Aqueduct.

Arravale and jockey Jose Valdivia Jr. took the lead soon after the start and battled with 8-1 Essential Edge down the backstretch through a quarter in 23.96 and a half in 47.52, while Masseuse settled a length and a half more behind them, hugging the hedge on a ground-saving path under Edgar Prado. Arravale continued to lead rounding the far turn and entering the lane, but when asked by Valdivia, came up empty and uncharacteristically stopped at the 3/16 pole. Masseuse angled out 3 wide at the top of the stretch and pulled away to a 1/2 length lead over the tiring Essential Edge with a furlong to go. 14-1 May Night, who was last throughout, rallied down the center of the course but Masseuse held her off in the final strides to win by a nose in a photo finish in 1:45.55 over the firm course. It was just a neck back to 9-1 Elle Runaway in third, while Arravale finished last. 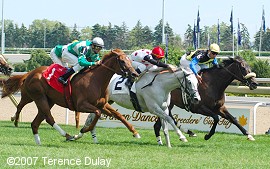 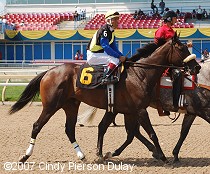 Masseuse returns after the race. Her jockey Edgar Prado said, "Every time my horse saw the horse outside, she would keep trying a little more. (Mr. Toner) told me to sit behind the speed and wait. It's a long stretch. When you press the pedal she will be there for you. That's exactly what happened." Prado swept the two graded stakes races on Sunday afternoon, coming back to win aboard Sky Conqueror in the main event. 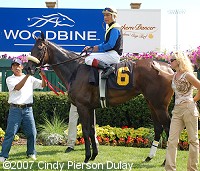 Masseuse in the winner's circle. Her trainer James Toner said, "If you'd had seen what she looked like last year, as compared to what she looks like now. She went off on a van at Monmouth Park. To have her come back at the same level shows you what kind of horse she is. She fights and lays it on the line for you. She's very competitive and she's a very tough mare." 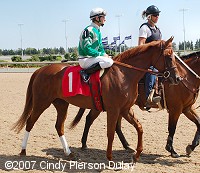 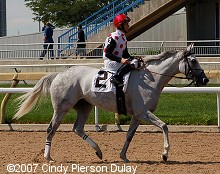 Left: Second place finisher May Night in the post parade. 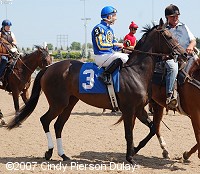 Last place finisher and beaten favorite Arravale in the post parade. 2006 Canadian Horse of the Year and Champion Turf Female Arravale set the pace but tired in mid-stretch to finish last under regular rider Jose Valdivia Jr. Her record is now 5 wins, 1 second, and 1 third in 9 career starts with earnings of $1,190,480 for owner Robert Costigan and trainer Mac Benson. 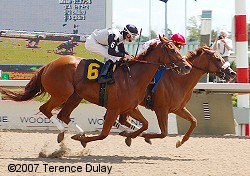 The other distaff stakes event on the card was the $125,000 Ontario Matron Stakes for older fillies and mares going 1 1/16 miles on the Polytrack. 9-5 second choice She's Indy Money stalked the pace set by 8-1 Miss Dorothy through fractions of 24.26, 48.15, and 1:12.52, then came out three wide into the stretch. She battled with 6-1 Arden Belle through the final furlong but dig in late to get her neck out in front at the line, completing the trip in 1:44.22. It was 2 lengths back to 6-1 Be Envied in third, while 7-5 favorite Executive Flight, who raced in second early, tired late to finish fourth.
Results Chart

Her trainer Malcolm Pierce said, "I'm thrilled with her. She's trained really well up to this race and it's just nice to make her a stakes winner, she's so well bred. She settles in real good. She doesn't want to be any part of the pace. She just waits to be asked and she comes running when asked."

Her jockey Garrett Gomez said, "She was so settled down inside. When the horses came to her up the backside, there was no real response and I was kind of worried for a second. But I shook her up, picked her up a little bit and she was there for me. When I turned for home, I really didn't expect (Arden Belle) to hang in with us and go on, but the longer down the stretch we went, she started to get me a little worried. But this filly kept digging in, kept fighting and did what she was supposed to do."