There were two other graded stakes races on the undercard of the Pattison Canadian International (G1). The distaff counterpart to the International is the $1 million E.P. Taylor Stakes (G1) for older fillies and mares going 1 1/4 miles on the turf. A field of ten went to post on Sunday afternoon, with French-raced 3-year-old filly Mrs. Lindsay sent off as the 7-5 favorite, coming into the race off a win in the Prix Vermeille (G1) at Longchamp in September. Earlier in the year she won the Prix Penelope (G3) at Saint-Cloud and finished second in the Prix de Diane (French Oaks, G1) at Chantilly. The 4-1 second choice was top local hope Sealy Hill, who swept the Canadian Triple Tiara with victories in the Woodbine Oaks, Bison City, and Wonder Where. She finished second in the Canadian (G2), the major local prep for this event. Irish-raced Four Sins was the 6-1 third choice, off a victory in the Blandford (G2) at the Curragh.

14-1 Essential Edge was allowed an uncontested lead down the backstretch under jockey Jono Jones, and she set easy fractions of 24.43, 47.72, 1:11.49, and 1:36.17 while as many as 2 1/2 lengths clear of Four Sins who settled in second, and Mrs. Lindsay who was just behind her in third. At the top of the stretch, Essential Edge was beginning to tire as Sealy Hill, who had raced back in sixth early, came out four wide on the turn when asked by jockey Patrick Husbands for her rally and gained the lead at the 3/16 pole. She opened up a 1 1/2 length advantage but John Murtagh aboard Mrs. Lindsay moved the favorite down to the inside for faster ground and she took full advantage. The pair battled through the final 1/16 of a mile, but in the final strides Mrs. Lindsay dug in to pull away by 1/2 a length at the line, completing the trip in 2:00.68 over the firm turf, a new course record for 1 1/4 miles. It was another 1 1/2 lengths back to 6-1 Barancella third. 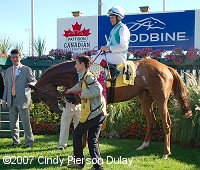 Mrs. Lindsay in the winner's circle with trainer Francois Rohaut on the left. Rohaut said, "She showed us last year that she was a top class filly, She only ran once, a very good race (second in the Prix de la Cascade for first-time starters). We were very pleased and gave her a good winter to get everything ready for the big races in the spring and summer." 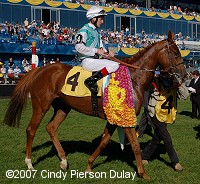 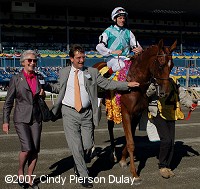 Left: Mrs. Lindsay parades for the fans. Her jockey John Murtagh said, "At the top of the straight, I pulled her out to go. The acceleration wasn’t immediate. (Sealy Hill) kind of quickened up and maybe got a length on me. But she’s very brave, she’s very tough. When I asked her for everything, she gave it to me. She’s improved a lot, she’s improved all season. She ran in the French Oaks, ran well, the trainer said maybe we might win the Prix Vermeille. That was one of his plans. Now we come to Canada and won the biggest race over here." 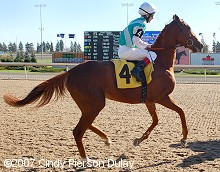 Mrs. Lindsay takes off in European fashion from the post parade. 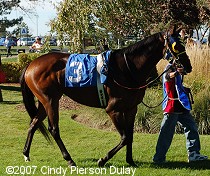 Second place finisher Sealy Hill in the paddock. Her jockey Patrick Husbands said, "Today my filly was much the best. About the eighth-pole, when I got her into gear, she went to duck as I got alongside (Mrs. Lindsay). I finally got her focused. I got her about two strides in front and then she pulled herself right up. She didn’t get tired." 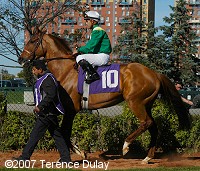 Third place finisher Barancella heads out for the post parade. 6-1 Barancella raced at the back of the field for the first 6 furlongs under regular rider Javier Castellano, came out three wide into the lane and was all out through the stretch to finish third just 2 lengths back of the winner. The Bobby Frankel trainee improved her record to 4 wins, 5 seconds, and 4 thirds in 19 starts, earning $758, 916 for owner Gary Tanaka.

Closing out the stakes action on Sunday was the $500,000 Nearctic Stakes (G2) for older horses sprinting 6 furlongs on the turf. 7-1 Heros Reward stalked the pace of 6-5 favorite Smart Enough through a quarter in 22.23, then took over the lead at the top of the stretch getting the half in 44.98. Heros Reward opened up a 1 1/2 length lead at the 1/8 pole, and easily held off late-running 6-1 Quietly Mine to win by 3/4 length in 1:08.04. It was another 3/4 length back to favorite Smart Enough third. 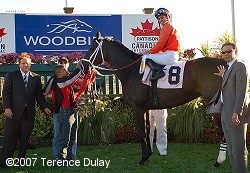 Heros Reward in the winner's circle with trainer Dale Capuano to the right. Capuano said, "(Smart Enough) beat us twice. Both times, we felt we were unlucky. Smart Enough is a fantastic horse and we knew it would take a lot to beat him. We broke well. Javier had him right there and running easy. I was a little surprised he was that close. When I saw the first quarter in 22.23, I wasn't as concerned. That's not all that fast for these horses. He responded well and we got lucky." 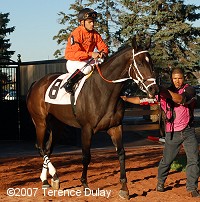 Heros Reward in the paddock. His jockey Javier Castellano said, "He broke pretty sharp. I had good position all the way. I knew I had plenty of horse at the top of the stretch. Today was his day." 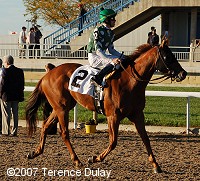 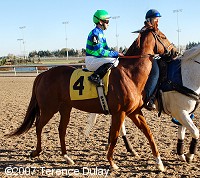 Left: Second place finisher Quietly Mine returns after the race.