The $1 million Woodbine Mile (G1) is one of the highlights of the Woodbine thoroughbred racing season. The fall event features top older horses contesting the 1-turn mile trip on the E.P. Taylor Turf Course under allowance weights, with the winner earning a guaranteed spot in the Breeders' Cup Mile field under the Breeders' Cup Challenge "Win and You're In" program. It was a perfect Sunday afternoon for racing at the Toronto oval, with clear skies, a light breeze, and the temperature around 70 degrees.

The race took on a political twist early in the day, when originally scheduled jockey Julien Leparoux was replaced by local rider Robert Landry aboard 25-1 Field Commission, who is 10% Canadian owned by Dan Vella. Foreign-based jockeys are ineligible to ride Canadian-owned horses unless an exemption is granted by the stewards and the connections of Field Commission neglected to apply for the exemption at time of entry.

Bribon, winner of the Metropolitan Mile in May on the dirt was sent off as the 2.00-1 favorite in the field of 10, exiting a $100,000 allowance race on the turf at Saratoga in August. In to challenge him included last year's runner up and Breeders' Cup Filly and Mare Sprint winner Ventura as the 2.10-1 second choice. The 5-year-old mare, the only female in the race, won the Santa Monica over females before finishing second in both the Kilroe Mile against males and the Madison against females. Del Mar Mile winner Ferneley completed the top three on the board as the 6-1 third choice. Last year's upset winner Rahy's Attorney, despite winning both the King Edward and the Nijinsky over this course, was all but dismissed as the 7-1 fourth choice.

22-1 Grand Adventure was sent to the front and was stalked by Rahy's Attorney and 15-1 Jungle Wave through quick fractions of 23.55, 46.03, and 1:09.08 over the very firm turf course. Favorite Bribon sat fifth while Ventura was unhurried early, close to the back of the field. Entering the stretch, the pace took its toll on the leaders allowing Jungle Wave to ease to the front at the 3/16 pole, but the hot fractions setting the race up for the closers. Jockey Garrett Gomez moved Ventura out for running room and she responded under a coaxing handride, taking over the lead inside the 1/8 pole. Ferneley, who raced in 7th early, also came out wide for the drive under new jockey Rafael Bejarano but Ventura had gotten the jump on him and easily held him off by a length at the line, completing the trip in a stakes record time of 1:32.04, just 0.20 seconds off the course record. It was another 3 lengths back to 9-1 Sterwins who nosed out Jungle Wave for third place money. Favorite Bribon was unable to launch a drive late to improve position, finishing fifth beaten 4 lengths. The previous stakes record time was 1:32.72 set by Soaring Free in 2004. 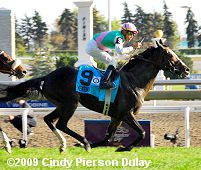 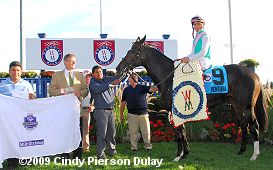 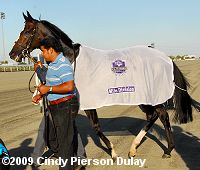 Left: Ventura in the winner's circle. Ventura is the first female winner of the Woodbine Mile in its 13-year history, and she is the first horse to win the event after finishing second the previous year.

Right: Ventura heads back to the barn with her winners' blanket. Although this win guarantees her a spot in the Breeders' Cup Mile field, she will probably go to the Filly and Mare Sprint instead. Juddmonte Farm manager Garrett O'Rourke said, "The plan was always to go back in to try to win a second filly sprint, and obviously we will sit down and discuss that. I think that they will have to bring their running shoes, to try to beat her in that same race, she loves that (Santa Anita's synthetic Pro-Ride) track. A mile is pushing the limits of her stamina but she's so brilliant I think she could pull it off." 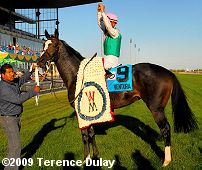 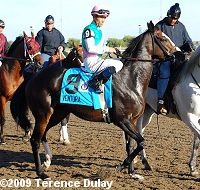 Right: Ventura in the post parade. Gomez said, "You don't worry with Bobby (Frankel), he does a tremendous job, and he knows this filly like the back of his own hand. She was off for a little while, you could she was feeling her oats, and the pre race nerves. I got her calmed down, just after you asked me that, she settled in, and did everything right. Definitely, the soft ground hurt her chances (last year), she got such a beautiful turn of foot, and on the soft ground she was not able to show that explosive move like you saw today. It takes away from her a little bit. To come off a layoff, and to do what she did today, she is a tremendous mare. She did everything so well, I didn't really have to get into her so hard, I squeezed her, but, I didn't even use the whip on her today, to encourage her anymore than what she was doing, she went by so fast, and she did quite impressively." 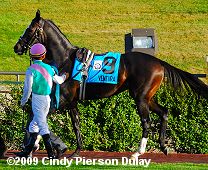 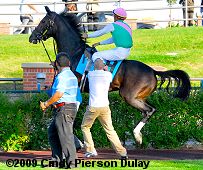 Ventura was quite a handful in the paddock and leapt straight up in the air when Gomez tried to get aboard. Jockey Garrett Gomez said, "She actually went up in the air and halfway bucked and she was just really, really fresh. She was just feeling so good she just couldn't stand herself. You put a saddle on then put the jock on she's got a little attitude of her own. She's quite a handful. By the time I got her to the backside she was fairly calmed down. She was more like herself the last five minutes of the post parade. She loaded up, was good in the gate and left the gate good then she travelled well." 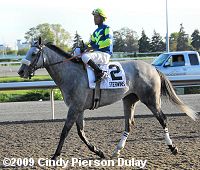 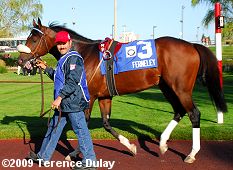 Left: Second place finisher Ferneley in the paddock. The 6-1 third choice raced in midpack 7th under new jockey Rafael Bejarano, saved ground on the turn but came out wide for the drive, rallied well but was no match for the winner, beaten just 1 length at the line. The Ben Cecil trainee improved his record to 6 wins, 3 seconds, and 6 thirds in 27 starts, earning $612,161 for owner Silver Springs Stud Farm.

Right: Third place finisher Sterwins returns after the race. His jockey Patrick Husbands said, "I was happy with how he ran. Sterwins is the kind of horse that you can't confuse him. I tried to get him to lay closer. He didn't want to be closer." 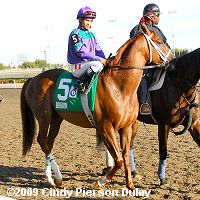 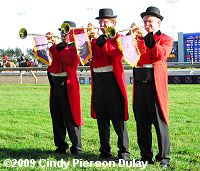 Left: Fifth place finisher and beaten favorite Bribon in the post parade. His jockey Alan Garcia said, "I have no excuse for my horse. He had a good trip. (These are) better horses."

Right: The Woodbine Bugle Boys call the horse to the post for the Woodbine Mile. 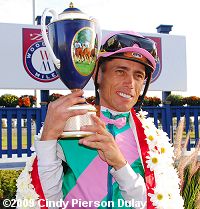 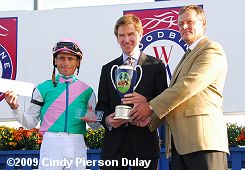 Right: The trophy presentation for the Woodbine Mile with jockey Garrett Gomez, President and COO of Woodbine Entertainment Nick Eaves, and farm manager for winning owner-breeder Juddmonte Farm Garrett O'Rourke. O'Rourke said, "Great credit to Bobby (Frankel, trainer) and all the crew, and having her ready of her layoff. She is one of his very favorites, she is a super mare, she is so full of spit and vinegar, and she came here today, and went one race better than that. The ground made definitely made a difference today, she got a fantastic turn of foot, and Garrett (Gomez) rode her perfectly. She broke out of the gate and Garrett got her in behind all the leaders, they seemed to be going at a good enough gallop in front, but she was just totally relaxed behind the pace. I knew if she was back to her best that was the perfect place for her to be to produce her burst of speed. She came around the bend and it was a matter of that little bit of anxiety for a few seconds just to see if she was going to be able to produce it. But the very minute he let her go I think she just started to inhale them. It was just like the Breeders' Cup last year and every bit as exciting."