There are two other graded stakes races on the turf on Woodbine Mile day. The co-feature on Sunday was the $750,000 Northern Dancer Turf Stakes (G1) for older horses going 1 1/2 miles, one complete lap of the E.P. Taylor Turf Course. This event is the major local prep for the Pattison Canadian International on October 17, which is Woodbine's "Win and You're In" race for the Breeders' Cup Turf. A field of 9 made the gate (after Musketier scratched out), with last year's winner Champs Elysees sent off as the 5-2 favorite exiting a close second place finish in the Sky Classic Stakes last time out. In to challenge him included 3-1 second choice Marchfield, who defeated Champs Elysees in the Sky Classic, after finishing second in the Nijinsky, and 7-2 third choice Just as Well, second to Gio Ponti in the Arlington Million last out after winning the Arlington Handicap.

54-1 outsider Medjool sprinted away from the field first time past the stands and up the clubhouse incline, setting early fractions of 24.98, 49.73, 1:14.62, and 1:39.34 while as many as 6 1/2 lengths in front of 6-1 Marsh Side, who in turn was 2 lengths in front of the rest of the field. Jockey Garrett Gomez kept Champs Elysees well back in 7th saving ground around both turns. On the far turn, Medjool tired from his fast early pace, fading from contention allowing Marsh Side to easily take over the lead at the top of the stretch through 1 1/4 miles in 2:03.83. Quijano, who stalked the pace in fourth, and Champs Elysees, made headway through the stretch but inside the 1/8 pole Marsh Side bore in on Quijano who in turn caused Champs Elysees to check. Jockey Julien Leparoux took Just as Well to the outside for room for the drive but Marsh Side outfinished him to win by 1/2 a length in 2:26.68. It was just a head back to Quijano finishing third, and 3/4 more to Champs Elysees fourth. 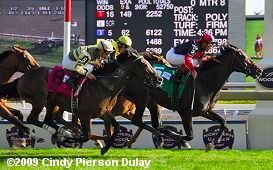 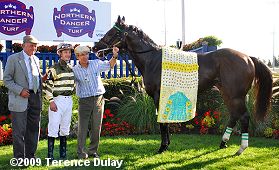 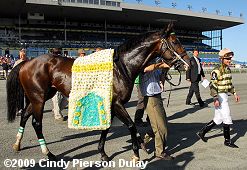 Left: Just as Well in the winner's circle. He had already been unsaddled while they waited out the lengthy inquiry, so he only wore the flower blanket.

Right: Jockey Julien Leparoux escorts Just as Well to the winner's circle, something you don't see very often. Just as Well, a 6-year-old son of A.P. Indy out of Nureyev mare No Matter What, improved his record to 5 wins, 5 seconds, and 3 thirds in 19 starts, earning $950,000 for his trainer and owner Jonathan Sheppard. 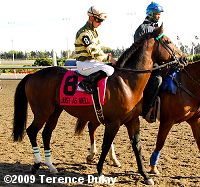 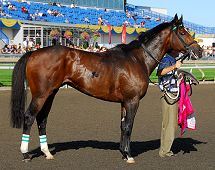 Right: Just as Well strikes a pose while waiting for the results of the inquiry. His trainer and owner Jonathan Sheppard said, "I feel badly. Neil (Drysdale, trainer of Marsh Side) is a good friend. He's got an awfully good horse. He possibly was the best horse but he certainly bore in across the course in the late stages. Even though we weren't really the recipient of it, I give Julien (Leparoux) a lot of credit because he easily could have been in the melee. I think he saw it coming up and managed to sneak out from behind them and have a clear run down the middle. The horse ran a superb race. We thought coming out of two consecutive 1 1/4 races where he was closing well that this is a good time to try him at the 1 1/2-miles. Julien got him settled very nicely. He relaxed for him and he came with his run. He probably just took a while extricating himself. If he had a clear run right when they first turned from home he maybe would have got there anyway." 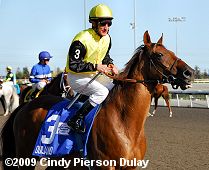 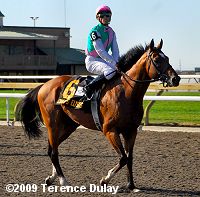 Left: Second place finisher Quijano in the post parade. The 5-1 fourth choice raced in midpack fifth early under regular rider Andrasch Starke, dueled for the lead through the stretch, was forced in at the 1/8 pole by Marsh Side and finished all out to get third beaten 3/4 length at the line, placed second by the disqualification. The Peter Schiergen-trained son of Acatenango out of Unfuwain mare Surumu improved his record to 14 wins, 5 seconds, and 2 thirds in 30 starts, earning $2,482,085 for owner-breeder Gestut Fahrhof. Quijano was second in last year's running of this race as well.

Right: Third place finisher and beaten favorite Champs Elysees returns after the race. The 5-2 favorite raced well back in 7th early under jockey Garrett Gomez, closed into the stretch but was checked sharply when interfered with by Quijano, then finished gamely to finish fourth beaten 1 1/4 lengths, placed third by the disqualification. The Bobby Frankel-trained son of Danehill out of Kahyasi mare Hasili improved his record to 5 wins, 8 seconds, and 7 thirds in 27 starts, earning $1,763,647 for owner-breeder Juddmonte Farms. Champs Elysees won this race last year. 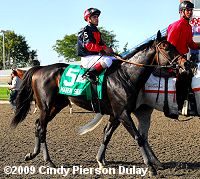 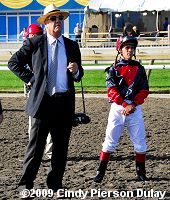 Left: Fourth place finisher after disqualification from first Marsh Side returns after the race. The 6-1 fifth choice stalked the pace well back under regular rider Javier Castellano, gained a short lead at the 1/4 pole, but came in on Quijano in mid-stretch causing Quijano and Champs Elysees to check. He finished 1/2 length in front of Just as Well but was disqualified to fourth. The Neil Drysdale-trained son of Gone West out of Pleasant Colony mare Colonial Play has a record of 5 wins, 3 seconds, and 1 third in 23 starts, earning $1,826,415 for owner-breeder Robert S. Evans.

Right: Marsh Side's trainer Neil Drysdale and jockey Javier Castellano watch the replays while they await the results of the inquiry. Drysdale also trained Hawksley Hill who was disqualified from first to fourth in the 1999 Atto Mile, as the race was previously named. 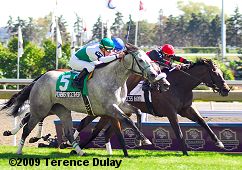 Kicking off the stakes action on Woodbine Mile day was the $300,000 Canadian Stakes (G2) for older fillies and mares. This is the major local prep for the E.P. Taylor Stakes on the Canadian International undercard, Woodbine's "Win and You're In" event for the Breeders' Cup Filly and Mare Turf. Just seven went to post in this "about" 1 1/8 mile turf trip around one turn, with last year's champion turf female Forever Together sent off as the 3-10 favorite, exiting a victory in the Diana at Saratoga. In to challenge her included 9-2 second choice Points of Grace, fifth in the Beverly D last out after winning the Dance Smartly and 8-1 third choice Much Obliged, winner of two straight allowance events this year but winless in stakes company since last May.

26-1 Lomaki battled for the lead with Points of Grace exiting the chute and down the backstretch through opening fractions of 24.39 and 48.44 over the firm going, while Forever Together sat fifth, 5 lengths off the pace. Entering the stretch, Lomaki tired and faded to finish last while Points of Grace continued to lead to the 1/8 pole. 15-1 Princess Haya, who rated 5 1/2 lengths off the pace early, saved ground the whole way under jockey Rafael Bejarano and rallied down on the rail late, while favorite Forever Together came out four wide into the stretch for her rally. Much Obliged also put in her rally on the far outside, and the three hit the wire together. The photo finish indicated that Princess Haya held off Forever Together by a nose in 1:45.03, and it was just a head back to Much Obliged to complete the three horse blanket finish. 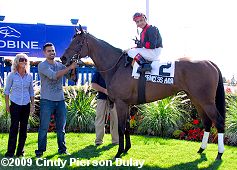 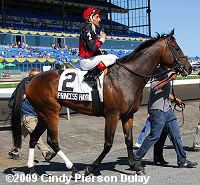 Right: Jockey Rafael Bejarano celebrates and Princess Haya heads to the winner's circle. Bejarano, who rode the filly for the first time, said, "I felt comfortable in the race. My horse, she loves to come from behind. I let the speed go a little bit. I was comfortable on the rail, waiting. In the stretch, I could see the horses in the lead spread a little bit, so I came through and made my move on the rail. My horse gave me a big kick. She's got a big turn of foot." 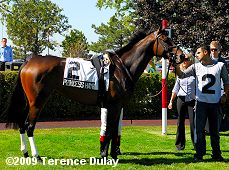 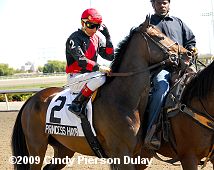 Left: Princess Haya in the paddock before the race.

Right: Princess Haya in the post parade. Julie Barnes, assistant to winning trainer Michael Matz said, "We weren't quite sure, actually (how she'd do in the Canadian). It was a pretty tough race. She was stepping up a lot. We figured if she finished third, she'd run really, really well.  This is probably her distance. She just did it this time." 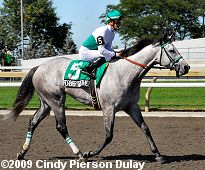 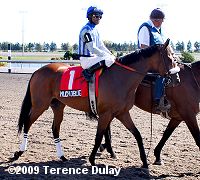 Left: Second place finisher Forever Together returns after the race. The 3-10 favorite rated back in fifth early under regular rider Julien Leparoux, launched her rally a furlong out but was outfinished by the winner, losing by the slimmest of margins. The Jonathan Sheppard-trained daughter of Belong to Me out of Relaunch mare Constant Companion improved her record to 9 wins, 3 seconds, and 3 thirds in 18 starts, earning $2,570,500 for owner Augustin Stable.

Right: Third place finisher Much Obliged in the post parade. The 8-1 third choice rated in sixth early under regular rider Patrick Husbands, came out five wide on the turn and was outfinished late, losing by a head at the line. The Malcolm Pierce-trained daughter of Kingmambo out of Strawberry Road mare Danka improved her record to 5 wins, 2 seconds, and 1 third in 14 starts, earning $342,440 for owner-breeder Pin Oak Stable.